10 Things You Didn't Know About A Very Witchy Yuletide by D. Lieber

Welcome to the book tour for A Very Witchy Yuletide by D. Lieber! Today you're going to get a sneak peek inside with an excerpt and then learn 10 fun facts about the book! Follow the tour for even more and then be sure to enter the giveaway! 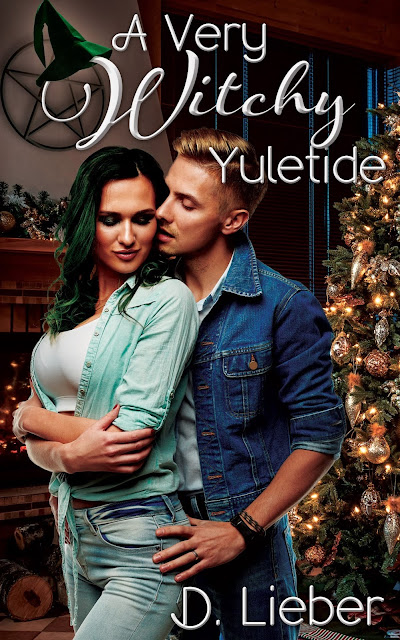 First love is hard to forget, and even harder to ignore…

Evergreen Pendre wasn’t planning on going home for Yule. But when her Mom tells her the old coven is coming for a visit, she wants to see everyone. Well, almost everyone.

After four and a half years, Sawyer Collins finally has a chance to reconnect with his first love, Eeva Pendre. He might have been too shy to tell her how he felt before, but he’s changed. And he’s determined not to let her slip away this time.

As the coven prepares for Yule, they are reminded that not everyone has the holiday spirit in this contemporary Pagan holiday romance.
Read an excerpt:

As Eeva shifted her weight from foot to foot, swaying in time, they started the simple steps of the dance, circling each other.

“Yeah, that’s it,” Sawyer encouraged. “You remember. Ready for the staff?”

Sawyer struck out with his staff, and Eeva met it with hers. He did it again with the same result. And so they went on in rhythm, the mock battle playing out in a dance. They circled each other. They clashed in the middle. They retreated.

Sawyer’s heart raced as the exercise made him warm in his coat. He took it off, his steps still in time. Eeva did the same, her breaths punctuated by white puffs from her lips.

“Ready to try the end?” Sawyer asked her.

“Come at me,” she challenged, her voice teasing.

Sawyer attacked, bringing his face in close to hers, their staves crossed between them. This was where he was supposed to push them apart. She was to fall to the ground, defeated. But as they locked eyes, and he felt her breath on his face, they both froze.

D. Lieber is an urban fantasy author with a wanderlust that would make a butterfly envious. When she isn’t planning her next physical adventure, she’s recklessly jumping from one fictional world to another. Her love of reading led her to earn a Bachelor’s in English from Wright State University.

Beyond her skeptic and slightly pessimistic mind, Lieber wants to believe. She has been many places—from Canada to England, France to Italy, Germany to Russia—believing that a better world comes from putting a face on “other.” She is a romantic idealist at heart, always fighting to keep her feet on the ground and her head in the clouds.

Lieber lives in Wisconsin with her husband (John) and cats (Yin and Nox).

Links
Website: www.dlieber.com
Goodreads: www.goodreads.com/dlieberwriting
Bookbub: www.bookbub.com/profile/d-lieber
D. Lieber will be awarding a hand carved tree of life tarot/jewelry/keepsake box (carved by DhewaDecor) to a randomly drawn winner (US ONLY) via rafflecopter during the tour.