Iceland is one of those places that I would love to visit one day. And personal stories are the best ones to read, especially WWII and post-WWII stories. Check out an excerpt from this memoir and then get to know the authors better in a fun little interview. Be sure to let them know what you think in the comments! And follow the tour for even more. Best of luck entering the giveaway! 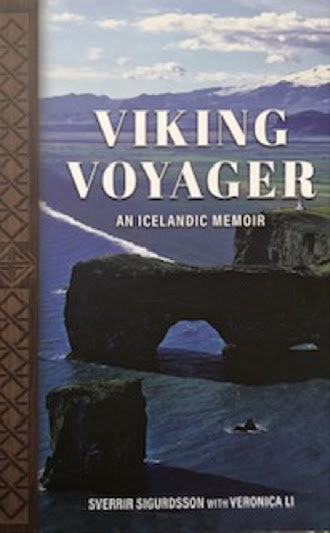 This vivacious personal story captures the heart and soul of modern Iceland. Born in Reykjavik on the eve of the Second World War, Sverrir Sigurdsson watched Allied troops invade his country and turn it into a bulwark against Hitler’s advance toward North America. The country’s post-war transformation from an obscure, dirt-poor nation to a prosperous one became every Icelander’s success. Spurred by this favorable wind, Sverrir answered the call of his Viking forefathers, setting off on a voyage that took him around the world.

One memorable incident took place [in 1968] during our drive through Anbar province in Iraq. The place was unheard of when I motored through, but after the U.S. invasion of Iraq in 2003, this Sunni stronghold of Saddam Hussein’s became world renowned for insurgency and suicide bombings. Even during my days, traveling in this neighborhood was dicey. While guessing my way through the desert of Al Anbar, we passed a ghastly sight. It was the charred remains of what looked like a small industrial complex. The scene evoked news articles about an Israeli air raid on an Iraqi nuclear research facility. I knew we shouldn’t be there, but there was no other way out than to keep driving. Soon after, a military patrol pulled up alongside. I stopped the car, and we all got out to show them exactly who we were, a family of dumb, lost foreigners.

A soldier peered into my car. He started shouting angrily in Arabic, his finger jabbing at the camera on the back seat. They hustled us all back into the Peugeot, I in the driver’s seat, Monika next to me, while Steinn shared the back seat with the soldier. I felt something hard poke at my spine. I glanced at the rearview mirror and realized the object was the muzzle of the soldier’s machine pistol. The drive lasted an hour at most, but it seemed like eternity. To prevent an accidental burst from the gun, I took it slow and easy on the desert tracks.

I’m not particularly fond of ice cream. In general I don’t like anything with a soft, slippery texture. I remember the first time I tasted a banana at the age of seven. This was in Iceland in the 1940’s, shortly after the Second World War, when bananas were an exotic and scarce import. I was rather disappointed that I had to share the banana with my sister. But as I put it into my mouth, I almost puked because I felt I was eating soap. Was I glad it was only half a banana!

My wife and coauthor, Veronica, who was born in Thailand where bananas grow wild, thought it was hilarious the first time she heard the story.

I like to compare myself with Thor, the Nordic god of thunder. He’s a powerful character who wields a hammer to create flashes of light and the associated thunder. However, he’s also simpleminded and has only one solution to every problem—his hammer. Veronica thinks I’m exactly like that. As a serious woodworker, the hammer is as essential to my craft as it is to Thor’s. Give me a problem that requires hammering, and I’ll nail it in no time. But give me a problem that requires a softer touch, I let Veronica take the lead.

First book you remember making an indelible impression on you.

Tales of a Barber Surgeon by Finnish author Zacharias Topelius. As a ten-year-old, I devoured the five volumes of the Icelandic translation. They were filled with action and blood and gore—just right for a boy’s literary taste. They were part of the tiny library at the farm I worked in during the summer. I read each volume dozens of times, since there were few other choices. Finland, with its magnificent architecture, poetry, and music, became a fascination for me. I ended up studying architecture in Finland and launching my career there.

How do you develop your plot and characters?

Before working on the plot, I had to determine which aspect of my life I wanted to write about in my memoir. Veronica, an experienced writer, helped me settle on a subject: the Icelandic upbringing that made me a modern-day Viking traveling the world for adventure. With this focus in mind, the episodes pertinent to the theme became the building blocks for the plot. It begins with my grandfather’s tragic death, which set the course of my life before I was born. The second half of the book chronicles my travels. The chapters are arranged in chronological order, but within this order, the narrative flashes backward and forward to allow views of events through different windows of time.

My characters are from real life and mostly people I know. Although I do make observations about them, I let their actions speak for themselves as much as possible. My starting point is that these are good people, with their quirks and weaknesses, and they’ve made a difference in my life. One example of how I develop a character is my portrayal of my ex-wife. I’d met her while studying architecture in Finland. I was twenty and she nineteen. We hardly knew each other, but as we tackled each crisis in our relationship, her character unfolded and mine too.

I’m most productive in my weekend home, which I designed and built with my own hands on the shores of the Chesapeake Bay. Veronica and I work at his and hers desks in our bedroom loft. The space is surrounded with glass that allows me to look out at the expanse of sea and sky. Tapping on my computer, I can see from the corner of my eye an eagle swooshing past the balcony or a flock of bufflehead ducks paddling in the water. When I get stuck, I just stare at the wonderful landscape and feel happy that I’ve had a blessed eighty-one years in this world. 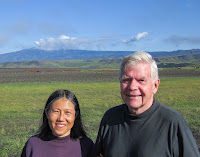 Sverrir Sigurdsson grew up in Iceland and graduated as an architect from Finland in 1966. He pursued an international career that took him to the Middle East, Africa, Asia, Eastern Europe, and the U.S. His assignments focused on school construction and improving education in developing countries. He has worked for private companies, as well as UNESCO and the World Bank. He is now retired and lives in Northern Virginia with his wife and coauthor, Veronica.

Veronica Li emigrated to the U.S. from Hong Kong as a teenager. She received her Bachelor of Arts in English from the University of California, Berkeley, and her master’s degree in International Affairs from Johns Hopkins University. She has worked as a journalist and for the World Bank, and is currently a writer. Her three previously published titles are: Nightfall in Mogadishu, Journey across the Four Seas: A Chinese Woman’s Search for Home, and Confucius Says: A Novel. Her website is www.veronicali.com.