Read an exclusive excerpt from Against the Wind

Against the Wind is the story of one man's goal to live life one day at a time. Tony F. Powell is sharing an exclusive excerpt here today. If you follow the tour, you'll be able to read even more. Be sure to leave your questions and comments along the way. Best of luck in the giveaway! 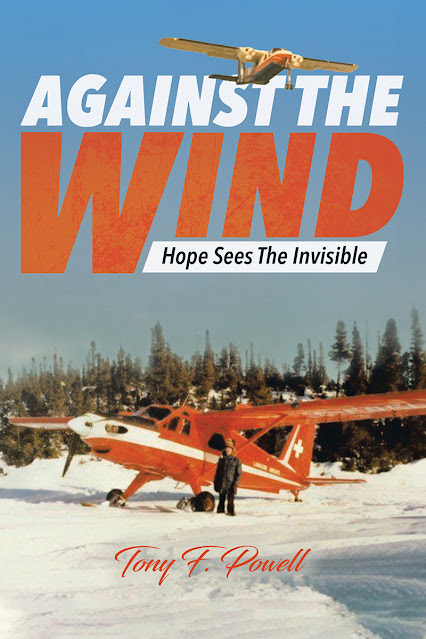 Tony Powell was born on March 16, 1955 in Charlottetown, Labrador, NL, on the Northeast Coast of Canada, son of the late Benjamin and Effie Powell. Together they had nine children - seven boys and two girls. Six boys become bush pilots. Tony is married to Ida Powell, and they have one child, Ramsey, who is a medical doctor.

Tony will take you on his life's journey. His stories are captivating, inspiring, and heart-wrenching. He never faltered in achieving his dreams and aspirations.

Tony has a great love for family and history. His greatest qualities are his positive attitude and calm nature, never allowing negative thinking to weaken his strengths and defeat his goals.

Tony's early years took him to the rich fishing ground off the shores of Labrador. At the tender age of seven he would accompany his dad and the crew to haul the cod traps in an ol' 10-metre motorboat. At age fourteen he was fishing as a share-man on his dad's longliner in the furry seas of Northern Labrador.

At age seventeen Tony was guiding sports fishermen from all over the world, fishing for trout and Atlantic salmon in our rich Labrador rivers and streams. Their excitement became his enjoyment.

Tony begin his career as a commercial pilot at the age of twenty. His love of flight included seven years with Labrador Airways, coupled with three years flying the mission plane out of North West River, Labrador.

Tony's dream was to have his own flying service. Pursuing his dream, he became owner/Chief Pilot of Labrador Travel Air, an aircraft charter company. With the newly constructed Trans Labrador Highway along our shores, Labrador Travel Air became history.

He has 45 years of flying experience and 27,000 hours of flight time on over 30 different types of single-and multi-engine aircraft on wheels, skis and floats, including a commercial helicopter licence, often logging 1500 hours in a single year. In Tony's years of flight thus far he is very proud to have a proven record of never having any injuries to his passengers or himself.

Tony continues to fly seasonally on a legendary Beaver seaplane for Portland Creek Aviation, and has his own PA-18 Super Cub C-GTFP.

I invite you to come experience first hand Captain Tony Powell behind the controls of the legendary de Havilland pistonpowered Beaver during the seventies without heaters in -50°C temperatures. Watch him perform many lifesaving mercy flights while battling some of nature's most severe weather conditions anywhere on the planet. His described flights will surely capture the attention of the most avid flyer as we witness him survive engine failures and even a crash landing amongst the huge trees in Labrador.

Come live out in real time his heroic shipwreck. Sit on his modified Mach Z Ski-Doo and feel the adrenaline flow through your veins as you race for dear life up the big mountain in the Race on the Rock at Marble Mountain, NL.

At age forty-eight, Tony was diagnosed with fourth and final stage cancer. Learn of his prognosis, and his courageous determination to survive. Experience his fight to beat the odds.

Throughout Tony's recollections you will travel by air, water and land, experiencing historic events and fatal airplane crash scenes in Labrador, including the story of his Grandfather Powell sailing onboard the Dorothy Duff while delivering a load of salt cod fish to the Mediterranean Sea during WWI. It will surely chill you to your core.

Tony will welcome you to his childhood family home where you will find pure love overcoming many of life's obstacles. Find out the true meaning of perseverance, courage and strength.

Tony has shown us what life's struggles are all about and how he survived them.

This book is a true reflection of living our lives one day at a time. Each day we all journey Against the Wind and survive the storms of life.
Read an exclusive excerpt:

What an awesomely nice feeling as she winded up and came to life. Mr. McNeil said, “This is a beautiful airplane, is it made by de Havilland?” I answered yes Sir, it was a stretched Beaver with a turbine engine and he answered that his first airplane ride was in a de Havilland aircraft on skis, then he reminded me about the story.

As we taxied outside for takeoff, I asked Mr. McNeil how far the pond was from where he found the airplane back when he was a boy. He answered, “Not too far, just up towards Kanairiktok Bay, I will show you, it’s not far out of our way going to Goose Bay.” As he pointed to the northwest, going airborne, we flew to the direct location where the bodies of the three men were found, and then flew a little farther toward the pond where the aircraft was found. It was interesting to see this site as I had heard so many stories about it over the years. I then set a course direct to Goose Bay, landing one hour later. Mr. McNeill had told me the story about the plane incident a couple times, so I would like to share the story with you, as he told it to me including some of my own research.

The de Havilland Dragon Rapide twin-engine biplane on floats, CF-BND, left Seven Islands, QC, on September 24th, 1939, for North West River, Labrador. The pilot was Joseph Fecteau, and the passengers were Gerald Davidson and J.C. Cote. The aircraft never arrived at it’s planned destination, then a massive search with about eighteen aircraft taking part found nothing. After three weeks, the search was called off.

Mr. Leonard McNeil told me that he, his father, and his brother Rupert, started off from Island Harbor at approximately noontime on February 28th, 1940, with their team of husky dogs heading in the country trapping. Normally they went in much earlier than this, but they were a lot later than normal this winter. They stopped by an old house and things didn’t look normal to him, noticing a little flag on the corner outside of the building. He said to himself, I will go in for a Tony F. Powell 166look cause this used to be Uncle Samuel Andersen’s old dwelling house. Once inside the doorway the old house was quite cold and eerie. There was an old-fashioned set of cupboards. Entering the living room they saw aluminum plates, a frying pan, enamel cups and a camp kettle. It was obvious the kettle had been boiled outside over open flames because it was covered in black soot. Whoever had been there must have intended to come back to leave their cooking utensils and tent, those were valuable things, nobody leaves things like that behind and don’t return to pick them up. Opening the door to the living room, right in front of him was a man lying on a large bed in his sleeping bag with a pillow under his head. There was a cup on his pillow. They figured it was where Davidson had been trying to give him a drink of water. It appeared that his hand was up as though he was reaching for the cup. Mr. McNeil knew he was deceased. Looking down at the floor there was another man lying on his back. His face was all disfigured and eaten right to the bone by mice and weasels; it was the body of Davidson. It gave him quite a shock. At a relatively close distance there laid the third man. He got the fright of his life to discover three bodies in there.

About the author:
Tony Powell was born and raised at Charlottetown, Labrador, Newfoundland Labrador, a proud member of NunatuKavut, Southern Inuit of Labrador. He is mixed blood Inuit and European decent, the son of the late Author Benjamin W. Powell of Charlottetown, Labrador, NL. His mom was the late Effie Mary Campbell Powell, born at George's Cove, ten miles south of Square Islands on the southeast coast of Labrador. Married to Ida Powell of Conche, on the great Northern Peninsula of NL, they have a son, Ramsey Powell, who is a medical Doctor.

When Tony was a boy the main mode of transportation along the Labrador Coast was by a Team of husky dogs or snowshoes.

A travelling doctor and nurse visited our community once during the winter by dog team, and once during the summer by boat. The first scheduled Aircraft passenger service was Labrador Airways by single engine Otter in 1970 winter time only.

Tony F. Powell will be awarding a $20 Amazon or B/N GC to a randomly drawn winner via rafflecopter during the tour.
a Rafflecopter giveaway
Posted by Andi at 3:00 AM