Review of I Can Still Hear You by Nicole Black

Welcome to the Name Before the Masses Tour for I Can Still Hear You by Nicole Black. Today I have an excerpt for you, as well as my thoughts on the book. You can also get to know the author better in this brief interview. Be sure to follow the rest of the tour for even more. Best of luck in the giveaway! 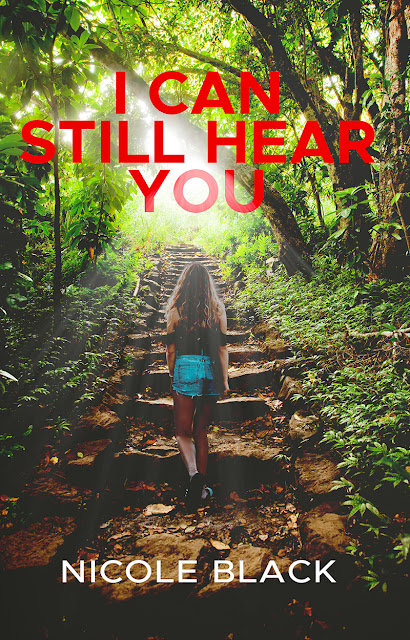 I Can Still Hear You is a powerful and deeply moving story which grapples with the universal pain of grief and the loss of a loved one. When Scarlett O’Connor loses her father at the age of 30, she’s forced to face the shambles that her life has become. With no money and no savings, the only thing that waits for her is a cryptic map and a mysterious letter. With nothing left to lose, she embarks on a trip to Maui for her father’s final adventure, to begin a treasure hunt which will force her to look deep inside herself and come to terms with her pain and grief.

Accompanied by her less-than-supportive fiancé, a close childhood friend, and an enigmatic man who was her father’s old acquaintance, Scarlett must decode the mystery and find the hidden treasure. But she knows she must face her fears alone, and calling upon the spirit of her father for guidance, she struggles to reconcile her emotions and uncover the treasure before her time in Maui comes to an end.

Perfect for fans of contemporary and women’s fiction, I Can Still Hear You is a gripping tale which will resonate with anybody who has struggled with the death of someone close. This book is a testament to the fact that even though we may have lost them, our loved ones stay with us no matter what challenges we face.
Read an excerpt:

I gazed up at the ceiling in quiet disbelief, as if I’d see my father looking down on me. Carefully, I removed the map from the box. It was yellowing and old, and the paper was as thin as tissue, so I took care in opening it. The map had some faint lines on it, some solid, some dotted, but no place names, no markings at all to tell what exactly it belonged to.

“Great, Dad,” I muttered aloud. “This is super helpful.”

But the second I said it, as had happened a dozen times in my life when I’d been presented with a puzzle, my father’s voice said, I’m not going to give you all the answers. Where’s the fun in that?

“This is one big party,” I muttered again. I had no idea where to even start. The only thing that made sense was to contact my dad’s friend living in Hawaii.

He couldn’t possibly mean that he wanted me to go to . . .

No. That was impossible.

I read the letter, again and again. The more I did, the more it seemed as if, yes . . . that’s exactly what my father wanted.

Peering in the box again, I hoped that wad of cash would present itself. Or at least the stopwatch. But neither did. The box was empty.

Buy Links:
Paperback * Kindle
(affiliate links included)
Kindle version $0.99 during the tour!
**My thoughts**
The description of this book really spoke to me, as I am just a few weeks away from my father's 10th anniversary. Even though it has been 10 years since he's been gone, at times it still feels like yesterday. And while the details are not exactly the same, I could completely empathize with a lot of Scarlett's thoughts and emotions as she goes on her journey.
My father didn't leave me a scavenger hunt in Hawaii that I needed to follow. But I feel like he still left me clues to help guide me along a path, and I also feel like I get regular messages from him. I can still hear his wisdom as well. Scarlett often notices a red bird. I have cardinals that moved into my yard the summer that he passed. They were also my father's favorite bird, and I know that they represent messages from the afterlife.
I even had my own Kevin and Mark to contend with as I was going through the process of clearing things up after my father died, only my "Kevin" wasn't as slap-worthy as this guy is.
If you've ever experienced a great loss, I think you may find some of yourself in this story as well. Just like comparing my story to Scarlett's, the details are not going to be the same, but you may relate to a lot of other aspects of her story.
I was very moved by this story. It was just beautiful. And I'm hoping that the sense of peace I got from it stays with me over these next few weeks as the anniversary of my own father's passing approaches.
Thank you to the author and Goddess Fish for providing me a requested copy of this book. All thoughts and opinions are my own.
Have you ever had an imaginary friend?

I have never had an imaginary friend. I did wonder what it would be like at one point.
Do you have any phobias?
Thankfully, I have no phobias.
Do you listen to music when you're writing?

I listen to classical music when I am writing. Once when I was in the Portland airport, I heard a man named Adam Hurst playing and his music inspired me. I bought three of his CD’s but the one I listen to every day is called Obscura.
Do you ever read your stories out loud?

I always read my stories out loud. It helps me to catch small inconsistencies and be able to hear what the book sounds like.
Tell us about your main character and who inspired him/her.
Scarlett O’Connor started showing up everywhere. I knew that she was going to be a younger, stronger version of the person I believe I am. However, Scarlett takes more risks than I ever did and she certainly beats to her own drummer. She has a lot of qualities that I always wanted, she stays strong in the face of adversity, she can read people easily, and she has no trouble being alone.

Nicole Black is an author, motivational speaker and entrepreneur with a passion for sharing unique stories and helping people grow. For over 20 years, she’s worked in the business world as a corporate trainer in employee productivity and effective growth, where she’s helped some of the biggest brands in hospitality and entertainment grow sustainably through inspiring their employees. She’s been featured on platforms including TEDxWilmington, Jack Canfield Show, Santa Barbara News Press, The George DiGianni show and the Tom Barnard Show.

Through her writing, Nicole hopes to empower her readers and impart valuable lessons about grief, loss, and emotional growth. In her free time, Nicole enjoys traveling, yoga, and spending time with her wonderful daughter in their home of Santa Barbara, California.