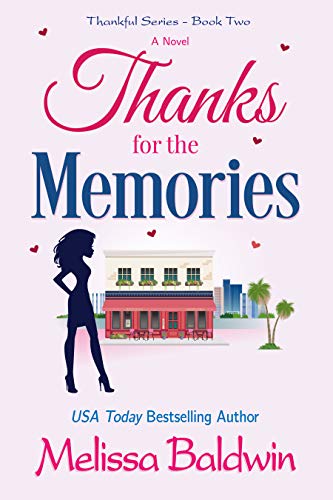 A new beginning leads to a second-chance at romance.

Done with the frigid northern winters, Reagan Westbourne has an easy solution—move to Miami. It makes total sense. She can even live with her sister. But after a few months of enduring her quirky sibling's newlywed bliss, Reagan is ready to spread her wings and move out. Life with two fun roommates and a promising job completes the picture for Reagan. Almost.

When Reagan's old college friend, Dante, opens a new restaurant in Miami, the past mixes with the present. Afterall, he's the only man Reagan's ever had feelings for. And it seems the attraction might just be mutual. Yet when their paths finally seem to align, old and new friends enter the picture, leaving Reagan unsure of her feelings.

Could this second-chance be the answer, or is it time to leave the memories in the past?
Buy on Amazon
(affiliate link)
**My thoughts**
We were introduced to Reagan and Dante in Thanks for the Love, and I was pretty sure their story would be up next. The two of them have been friends since college and have both ended up in Miami. Reagan is massively head-over-heels for him. But while Dante is also clearly attracted to Reagan, his main focus is still on his restaurant. And then other factors come into play.
What I liked about this book is that it is just as much about friendship as it is romance. You have the whole long-time friends discovering some attraction to each other, but maintaining comfort in that familiar friendship. You have Bethany, Reagan's lifelong best friend coming down from Chicago for a visit and how friendships can evolve and change over time and distance. You have the friendship between these new roommates that has ended up better than they had imagined. And then you have the unexpected twist in a friendship that was never anticipated. I think most of us will relate to a lot of these situations. I know I did, right down to the hottie chef.
And the title of this book is perfect. The relationships from your past define who you are today. And I mean all of them - the good and the bad. And sometimes you just need to leave the past in the past, but be grateful for the lessons you've learned.
This story definitely felt more complete than the first one, which was Gabby's story. Of course we know that Lila's story will be next, to round out the three roommates. I do have to say that I will almost want to get some stories on other characters after this. But to specify which ones would give away parts of this story and I don't want to give spoilers.
So yes, I enjoyed this one and am enjoying this series as much as Melissa Baldwin's others. (P.S. See if you can catch the nod to one of her cozy mysteries in this one.)
Posted by Andi at 8:06 PM