Read an exclusive excerpt from Rainbow of Emotions: A Selection of Poems by Djehane Hassouna

If you like poetry, you're in for a treat today, because I have an exclusive excerpt for you from the collection by Djehane Hassouna called Rainbow of Emotions. Be sure to follow the tour and leave questions and comments along the way. Best of luck entering the giveaway! 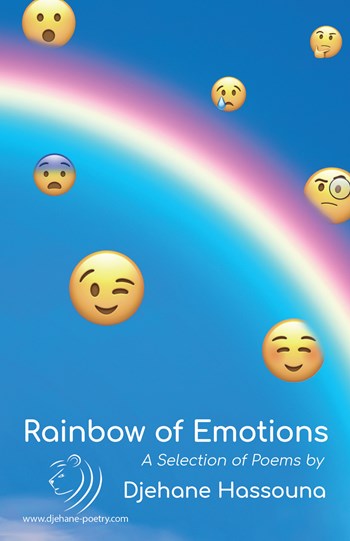 Rainbow of Emotions is a culmination of Djehane's life experiences. It is a map guiding the reader through the confusing labyrinth of life, unravelling the complicated pattern of her intricate journey through poetry. Djehane writes poems about nature, events, and feelings, about life as a whole. She expresses her hopes and fears, her triumphs and failures, her gratitude and resentment. Every poem is linked to her soul! Every poem is a masterpiece in its own right!
Read an exclusive excerpt:

Djehane Hassouna grew up in Egypt where she received her formal education in French. Her fascination with French poetry and fairy tales has always inspired her writing. Djehane also speaks Arabic, Italian, and a little Spanish.

Djehane received her BA in French from the Catholic University of America, her MA in Comparative Literature from Vermont College, and her PhD in Romance Languages and Literatures from the University of Pittsburgh. Throughout her life, Djehane has continued to express her feelings through poetry in both French and English. As she writes, and as her emotions take shape into verse, Djehane becomes one with her poetry.

Djehane Hassouna will be awarding a $20 Amazon or B/N GC to a randomly drawn winner via rafflecopter during the tour.
a Rafflecopter giveaway
Posted by Andi at 3:00 AM
Labels: book excerpt, book promo, giveaway, Goddess Fish, poetry