Something Discovered (Funerals and Weddings Series Book 2) by Bernadette Marie

Here's to starting over and new love! Enjoy an excerpt from the contemporary romance Something Discovered by Bernadette Marie. Be sure to follow the tour and comment along the way for extra chances in the giveaway! 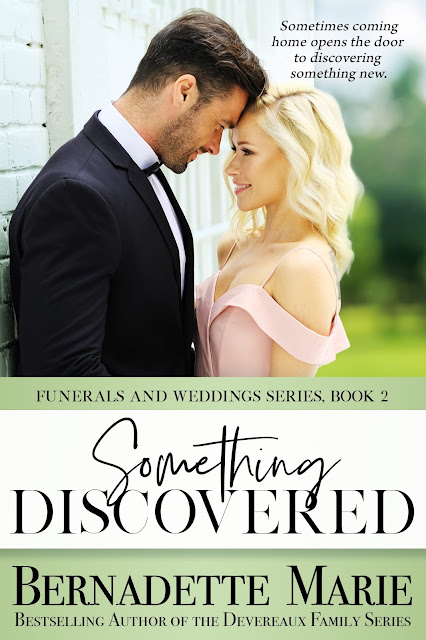 Sometimes coming home opens the door to discovering something new.

After Coach Diaz’s funeral, Alex Burke realized there was nothing left for him in Boston, especially after he found out his girlfriend had moved on. Moving back to Colorado, and bonding with his college friends, is what Alex needed to get his life back in order.

Catherine Anderson grew up in the shadow of Coach Diaz’s daughter. The best friend that was always overlooked, Catherine had reservations about the men who had been Coach’s Fabulous Five, especially Alex Burke who always had eyes for Rachel, and didn’t even know Catherine existed.

Coming together to mutually help Rachel through hard times, Catherine and Alex realize they’d had eyes for one another back when. Perhaps now that Alex was home, it would be a good time to explore an adult relationship. But when news out of Boston rocks his world, it just might be more than Catherine can handle.
Read an excerpt:

Either way, she’d held onto that grudge for a very long time. And wasn’t it a shame?

The beautiful blonde with the magnificent smile had been on Alex’s mind since he’d seen her at Coach’s funeral. He’d thought there was a breakthrough between them when they’d all rallied around Rachel on the Fourth of July, when the sound of fireworks triggered the trauma she’d gone through with the active shooter at the school. Catherine had let him ease in, wrap his arm around her, and they’d even settled on the couch together. Maybe that night had done them all in.

Still, awkward wasn’t how he wanted to talk about his time with Catherine.

He sipped from his beer. Once upon a time, Alex Burke had game, maybe it was just time to try and get it back.

Bestselling Author Bernadette Marie is known for building families readers want to be part of. Her series The Keller Family has graced bestseller charts since its release in 2011. Since then she has authored and published over forty-five books. The married mother of five sons promises romances with a Happily Ever After always…and says she can write it because she lives it.

Obsessed with the art of writing and the business of publishing, chronic entrepreneur Bernadette Marie established her own publishing house, 5 Prince Publishing, in 2011 to bring her own work to market as well as offer an opportunity for fresh voices in fiction to find a home as well.

When not immersed in the writing/publishing world, Bernadette Marie can be found spending time with her family, traveling, and running multiple businesses. An avid martial artist, Bernadette Marie is a second degree black belt in Tang Soo Do, and loves Tai Chi. She is a retired hockey mom, a lover of a good stout craft beer, and might have an unhealthy addiction to chocolate.

Insta: https://www.instagram.com/authorbernadettemarie/
Bernadette Marie will be awarding a $25 Amazon or B/N GC to a randomly drawn winner via rafflecopter during the tour.
a Rafflecopter giveaway
Posted by Andi at 3:30 AM
Labels: contemporary romance, excerpt, giveaway, Goddess Fish