The Writing Routine of David S. McCracken, author of Far Beyond Woman Suffrage: The Prices of the Vote

Every writer has their own writing routine that helps them to be the most productive. Today, author David S. McCracken is sharing his with us, plus an excerpt from his book Far Beyond Woman Suffrage: The Prices of the Vote. Follow the tour for even more. Best of luck entering the giveaway! 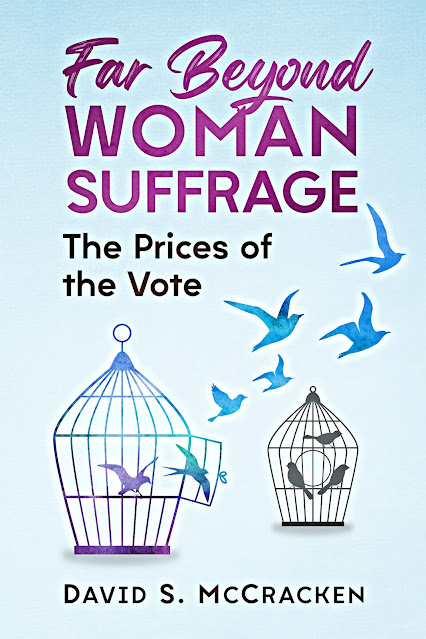 Far Beyond Woman Suffrage: The Prices of the Vote

It isn’t just about women in long skirts finally voting. The racists and the rich know that, and the politicians worry.

Mercy Martin has an inside view as the battle for woman suffrage nears a climax, but she encounters many puzzles:
From an innocent teen to a young adult, Mercy has a central role in the campaign. She advances from confinement in a suffragist jail cell to the national campaign for the suffrage amendment. She campaigns around Tennessee, ending at the capitol for the explosive climax in the last state that might ratify the amendment and grant the vote to women.

Why should something so clearly right be so hard, and why were some bitter compromises made? Mercy is right in the middle, relied on by key players. Along the way, she acquires a husband, a baby, and better parents than she was born with.

This is an intimate view via alternative historical fiction, as accurate as it can be and as thoughtful and moving as it must be. In this first novella of a series, Mercy jumps into the campaign for woman suffrage and prepares for a vital role in the coming decades. She’ll continue on into the wider civil rights struggle growing out of woman suffrage.
Read an excerpt:

Adjustments 2/19/1918
I’m glad to say my mood swings have evened out pretty much, but I fight to control my anger at my rapist. I don’t want the innocent baby to feel the rage. It’s kind of like my blocking knowing about sex up until a few months ago. How could I have been so good at that? I guess it’s like blocking knowing about Santa Claus. I didn’t let that truth in until I was eight, when all the girls were laughing at me.

Meeting Joe at the Line, 3/8/1918
I met an impressive young officer today after my shift on the line, tall, handsome, and strong-looking. I can imagine men following him into battle. I would. Joe Hamblen had come from the War Department to see what is going on at the White House. He kept looking at me standing at the fence, and I kept looking at him. We talked for a long time after my duty ended. We couldn’t stop talking until I had to go home for supper. I’m so glad that, with my long dress and coat, he couldn’t see my bulging tummy. He wants to see me again tomorrow for supper at a café near here. Well, I’m almost as tall as he is, and my baby isn’t that much of a bump, only four months along. I shudder to see his reaction when I must break my news. He has the dearest, kindest blue eyes. I’ll enjoy his company for now, my first almost-boyfriend. Then, what will ever become of me?

Buy on Amazon
(affiliate link included)
Just $0.99 during the tour!

Your writing routine
I start by reviewing the highlighted changes I made up to the current point, removing the highlights or changing them further. If any new passages in furtherance of the text at this point seem necessary, I do those. Then I start on brand new passages, maybe pausing for needed research, maybe for a long time. I start on the Washington Post and frequently check CNN and Gmail to see if my plans must change because of looming disaster. Next, I check Amazon and Goodreads to see if I’ve gotten any new reviews on my two books, as well as Amazon KDP to see how my sales are doing, and my website to see if I’ve gotten any comments or questions. Then, finally, I can start new writing, checking with Grammarly what careless mistakes I’ve made as I go along. Eventually, I need a break for food, family, home duties, for fifteen minutes of my favorite computer game, Starcraft. Then the whole process starts again. Finally, there’s supper and the evening news with my wife. I have about an hour for more writing until it’s time for Rachel Maddow on MSNBC--and maybe Lawrence O'Donnell. Finally, I work on marketing like this or write more to get sleepy. I may write some more in my sleep, until I see I might as well get up to do it for real.
Read another excerpt and an interview with the author at my site Candrel's Crafts, Cooks, and Characters.

David McCracken became a political activist when the Supreme Court ruled against school segregation. Fellow students joined him in urging the school board in Winchester, KY, to integrate immediately. He campaigned for a Democratic governor and joined the ACLU before he graduated from the University of Kentucky. After debating at U.K., he got a degree in economics and a job with the U.S. Department of Commerce.

When his daughters approached school age, he became increasingly concerned with how he wanted them schooled. Researching that, he decided teaching was what he really wanted to do. He got a master's degree in elementary education at Murray State University. He taught for several years, until the fact that his girls qualified for reduced-price lunches based on his salary got to him. Ronald Reagan's anti-government policies prevented him from returning to government work, so he took programming courses and shifted careers again. Programming was like being paid to solve puzzles all day, but teaching eventually drew him back until retirement.

For many years of this time, he was working intermittently at a novel that became Fly Twice Backward: Fresh Starts in Times of Troubles. This concerned his waking on his twelfth birthday, trying to figure out what had happened, following his new opportunities, and ultimately outliving an evil president resembling Donald Trump. After thirty-six years, David finally published it as an interactive alt-history Kindle novel. He soon started, Far Beyond Woman Suffrage: The Prices of the Vote, an alt-history novelette dealing with the campaign for woman suffrage. He finished this piece in just ten months. At 81, he is bold(?) enough to plan this as the first of a six-volume set dealing with the far-reaching results and implications of woman suffrage. His completed novels and another in the works are presented for discussion on a new website, DoFancifulFlights.com

David now lives with his third wife, stepdaughter, and step-grandson near Winchester, VA. He has a son from his second marriage, six grandchildren, and two stepchildren. And a wonderful black dog with four white feet.

David McCracken will be awarding a $10 Amazon or Barnes and Noble GC to a randomly drawn winner via rafflecopter during the tour.
a Rafflecopter giveaway
Posted by Andi at 4:00 AM
Labels: 99 cents, alternate history, book excerpt, book sale, giveaway, Goddess Fish, guest post