Raise your hand if you've ever thought about people on the dating sites possibly being serial killers! *raises hand* It could happen! I think of a modern day Ted Bundy online ... right? So what about this guy that Georgie meets in this book? Read an excerpt from Swipe Right for Murder by Polly Harris and then download your own copy to find out! I can't wait to see! Plus the author tells us about her journey to becoming an author and there's a great giveaway. Follow the tour to catch it all! 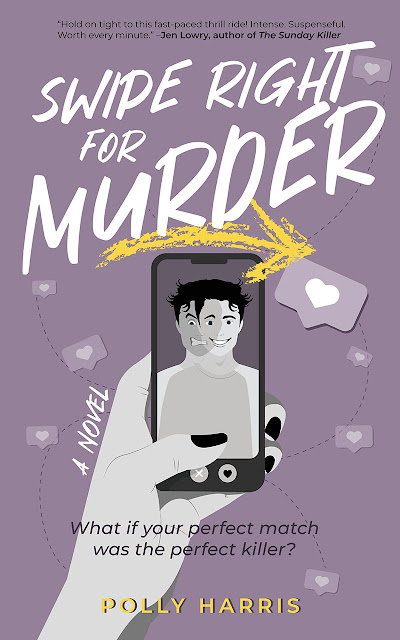 After a devastating heartbreak and a string of short-lived, failed relationships, college student Georgie Itoyama has now decided to approach dating in the same way that she approaches everything else: methodically, logically, and efficiently.

Georgie downloads countless dating apps, determined to find the love of her life as easily as she orders jeans online. And while her love-at-first-sight aspirations don’t exactly come true, she does find someone she likes. Quite a lot.

There’s only one problem. Girls are going missing at Georgie’s university, and all the signs are pointing to . . . him?

But that’s ridiculous. What are the chances that she’s dating an actual serial killer?

Then she matches with Nate. Mysterious, intelligent, and oddly fixated on solving the local disappearances. As Georgie’s relationships deepen with each of her guys, she unwittingly finds herself caught up in the mess that is murder, intrigue, and the nightmare of online dating.
Read an excerpt:

We turn the corner and I think it’s Amelia who notices her first. What I notice is the smell. Iron. Thick and palpable. And then decay. I never knew bodies could smell so quickly. I always assumed it would take days. Apparently, it’s only a few hours.

Amelia screams and it reverberates through the stairwell like a siren.

I don’t say anything, I don’t move. I’m frozen on the steps like someone is physically holding me there, unable to take my eyes off the girl at the bottom of the stairwell. Bent in a shape that no one’s supposed to bend in, her eyes open. But that makes it worse. Because if they were closed, maybe she could be sleeping—unconscious.

Three mind-numbing seconds pass, and then a thought flits through my head.

Whitney. Her name was Whitney.

Everyone’s journey to becoming a writer is unique to them—and all are special and interesting! I love making new writer friends or chatting with clients (I work as a full-time fiction editor), and hearing about how they fell in love with writing and what has sustained them in their career.

So I thought today I’d tell you my story.

I honestly think I knew I wanted to be a writer since I was about ten years old.

My earliest memories of creating stories are of me as a six-year-old dictating my ideas to my mother, who would patiently type them out on our laptop and print them for me later. As any good zillenial (Yup, I’m one of those inbetweeners—sorry Millennials and Gen Z, I just can’t choose between you!), I grew up with a healthy does of technology. Meaning, by eight years old, I had full competency with a computer. At least with the programs that mattered in my eyes—Word, Paint, and Publisher.

As an avid reader of Nancy Drew, I was obsessed with creating my very own murder mystery (who’d have thunk I’d ACTUALLY write one almost twenty years later? Lol!). So I typed away a story in word, created a cover in Paint, and formatted it in Publisher. I printed it out on my dad’s old printer, and viola! my masterpiece was complete. I actually still have that little “book” sitting on my bookshelf to this day!

From then on, I’d hog my parents’ computers any chance I could get to write whatever stories came to mind. Princesses, puppies, aliens, love stories—you name it! My very first novel, written at age twelve, was completed in the wee hours of the morning before my dad got up for work and would need his computer back.

At fourteen, I began a science fiction trilogy that would eventually become my first published work, a few years later at the age of sixteen. It’s crazy now to look back at sixteen-year-old me and know that she was persistent (and annoying!) enough to hound as many publishers as she could until she found one to publish her. But she did. (As embarrassing as that book is now, looking back, haha!)

From there, I published another handful of books, still in the science-fiction-fantasy realm.

And then college came along. As most of us probably know, juggling a social life with work and studies is hard enough—not to mention trying to write full novels. So, writing fell to the wayside as I finished my degree and started my career as a fiction editor.

But it didn’t stay dormant for long—it never could.

I am SO excited about Swipe Right for Murder. It’s my first contemporary novel, my first novel for older readers (older teens to late twenties), and it’s my first thriller! I am so proud of it, so grateful that everything has worked out, and I truly hope, more than anything, that you read and enjoy the book. As with all my books, I wrote it for you!

If you’re a writer yourself, what has been your journey with writing? Any similarities to mine? Stark differences? I’d love to know! 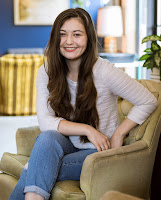 Polly Harris is the author of six YA novels and runs her own editorial company where she works on books just like this one. When Polly isn’t writing or editing, she can be found cuddling her cat (professionally known as her editorial assistant), crafting, or swiping through dating apps.

Email: harrispaulinec@gmail.com
Polly Harris will be awarding a $10 Amazon or Barnes and Noble GC to a randomly drawn winner via rafflecopter during the tour.
a Rafflecopter giveaway
Posted by Andi at 3:00 AM
Labels: book excerpt, cozy mystery, giveaway, Goddess Fish, guest post