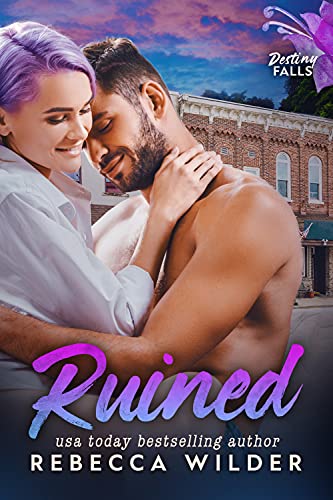 This story starts with a car crash.

Lyla Winters’s life is at a crossroads. She's bounced around from one job to another since she was sixteen, wanting to experience everything, but now that she's twenty-five, her lack of a plan is a little less cute. Too bad for her, she has no idea what she wants to do with the rest of her life.

She’s got a plan though. She’ll take a year off to travel and find herself. That plan goes off the road though when she gets to Destiny Falls, Michigan, and runs into some fancy SUV.

Out climbs Hudson Hayes. Restaurateur, James Beard Winner, and the man with a plan.

Also, maybe the man of her dreams.

She has to pay for the damage to both of their cars and just like that, there goes her savings for the year. Now she’s stuck in Destiny Falls, working at the Mystery Cabin and living in the apartment above Hudson’s restaurant.

The plan for the year off is still in play though. She just needs to save up her money and keep her eye on the prize. It’s just that the prize looks more and more like Hudson every day.

When Lyla finally has enough saved to leave Destiny Falls, will she be able to say goodbye to the friends and life that she’s made here in this small town? Or will she have finally found the one place that she truly belongs?

***This is a 50,000 word small town romance novel that ends in a happily ever after***
Goodreads * Amazon
(affiliate link included)
**My thoughts**
Ruined is apparently the second book in the Destiny Falls series by Rebecca Wilder. Fear not, it totally works as a standalone.
I first have to say that I fell in love with the town. Reading about it made me all nostalgic because I grew up just south of the Michigan line.
I felt a lot of connection to Lyla and her desire to travel after losing her father. I was also very close to my dad and found myself doing a lot of traveling after he passed. I just couldn't pack up my entire life looking to start somewhere new.
I also understood her need to rediscover herself, because your identity does truly change.
She got lucky when she rear-ended Hudson. He's rich, gorgeous, and talented in the kitchen. And instead of flipping out on her, he basically helped her launch a new start. I admit that I am torn on his persistence with the daily "This or That" notes that he leaves on her car asking her out. They are fun, but she kept saying no. Would it have been as endearing had it been someone who wasn't so rich and gorgeous?
That being said, I do like the two of them together. Being with a man who cooks well is amazing. Bonus points when he is also talented elsewhere.
I admit I don't quite understand the title of Ruined, though. I didn't get the impression that Lyla felt like she had been ruined by anything, though it was clear she felt inferior at times.
Nevertheless, I enjoyed my trip to Destiny Falls and look forward to returning.
Thank you to the author and Inkslinger for the requested review copy. All thoughts and opinions are my own.
Posted by Andi at 3:00 AM
Labels: book promo, book review, contemporary romance, Inkslinger, small town romance