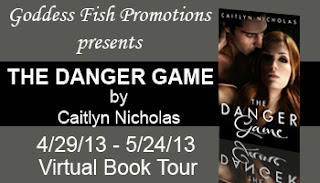 Please welcome author Caitlyn Nicholas to the blog today! She shares with us more about her new book The Danger Game, as well as giving us a sneak peek into her own life. Thanks for stopping by!
What was the inspiration behind 'The Danger Game'?

The Danger Game came along quite by accident. I was doing some research for my next release, The Bunker, and came across an article about cyber-war on Wired. The article sparked an idea for a story and I had the first draft of The Danger Game completed a few weeks later. (None of my stories ever happen that easily!)

In The Danger Game, I really like the heroine, Flick. But I have to say my absolute favorite is her father. He is very much a secondary character but is a man who has made the most of the few breaks life has given him, and despite living in a heartbreaking situation is filled with kindness and compassion.

What was your favorite scene to write?

My favorite scene is towards the end of the story. Flick, Ben and Liam are running for their lives with a pair of Doberman Pinchers coming after them at a flat gallop. This kicks off a scene that involves choppers, gun-fire, Flick running around in her bra and a goosebump raising escape. I love the suspense part of romantic suspense.

I’m really busy at the moment! My next release The Bunker is out in July 2013 – if you like the Danger Game you’ll love The Bunker! Then I’m hoping to have the first book in a romantic suspense trilogy out by Christmas.

You have published novels, a novella, and a short story. Do you prefer writing one style over another?

I find the length of the story depends on the story… if that makes sense. My next release is novel length, it’s a complex twisty tale which needed nearly 100,000 words to be properly told. However, for the trilogy I’m writing at the moment the plots are a bit simpler and the books will come out around the 60 – 70K mark. Stories that are padded with waffle to hit a certain word count really bug me as a reader, so I’m a ruthless editor and hack out anything that’s not needed.

Romance is your passion. Would you ever consider trying another genre?

I’ve got a real yen to write historical fiction. I’ve got a degree in history so it’d be a natural progression for me. Two things holding me back at this point are picking a time to focus on (one day it’s the Roman Empire, the next I’m all excited about Medieval France), and also the time to do all the research.

What is the recipe for success when writing a romance?

What is your idea of the perfect romantic getaway?

I have young kids. So I don’t really mind where we go, just a bit of time off with my yummy husband would be perfect.

I just finished The Colonist’s Wife by Kylie Scott. Loved it. Kylie is an amazing writer. Next on the TBR list is Man Drought by Rachael Johns, its an Australian rural romance, which a genre I really enjoy, can’t wait to start 

I think the thing that surprises most people is that I studied Chinese language for many years at University, and spent three months living with a family in the south west of China (back in 1998!). My language skills are very rusty now (very!) but my fascination with that country endures.

Is there anything else you wish to add?

My next book, The Bunker, is out in July 2013. It’s a romantic suspense set in a repurposed nuclear shelter in the green hills of England. When terrorists strike the British financial system Dimity Pond, who is already in a world of trouble, has to face her fears and save the country from total collapse. The man who wants to send her the jail for the rest of her life, Lord Richard Summerhayes, is the only one who can help her.

Thank you for having me, its been fun  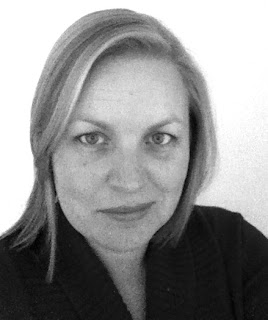 I began writing in 2005. Exhausted, pregnant (sure I was going to expire from morning-sickness) and coping with a demanding toddler, I decided the time was right to embark on a writing career. (In hindsight I may have been suffering from a scorching case of sleep-deprivation).

Still, it kinda worked out. My debut novel - and the first manuscript I'd ever written - Running Scared, was published in January 2007. My next book, Secret Intentions followed. Then I had a short story published in the Mammoth Book of Special Ops Romance (MBSOR) in 2010 - my story is called The Grey Man.

In 2012 my novel Drive Me To Distraction was published, and my novella TheDanger Game came out just before Christmas. My next book, The Bunker, will be published in July 2013.

You can find me online at: http://www.caitlynnicholas.com 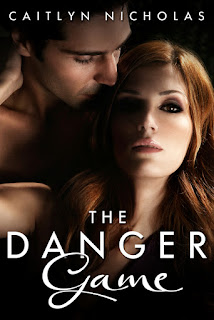 The Danger Game
by Caitlyn Nicholas

Flick likes computers. She’s good with them, and they do what she tells them, mostly. People, however, are more of a challenge.

But when a terrifyingly dangerous program is stolen, and her mentor killed, Flick finds herself on the run. The police are convinced she’s committed murder, and a sinister weapons developer will stop at nothing to force her to work for him.

In Ben’s line of work being suspicious keeps you alive. So when Flick turns to him, he quickly realises that she’s up to her neck in trouble and hasn’t fully grasped the danger she is in.

First he has to keep her safe, and then, together, they have to figure out how to save the world from an epic meltdown.

“It’s your last chance with the Vice Chancellor.”

“I said I’d be there.” Flick didn’t bother to hide her irritation. “I just won the man a million dollar grant, what more does he want?”

“Your bubbly and fun personality?” There was amusement beneath Andy’s sarcasm.

Flick snorted. “All right. Okay. I’m leaving now.” She growled the words, and hit the off-button on her phone.

They both knew she lied.

She dropped the phone onto the desk. Then, scowling, she clicked on the icon that’d run the Bellona program. It crashed instantly, and took the computer with it.

“Awesome.” She threw herself back into her chair and stared at the ceiling panels, running the changes she’d made to the code through her mind. Realizing it’d be a waste of time to unpick what she’d done, Flick rebooted her computer and went in search of a clean copy of the program on the backup server.

There were two versions. Usually they only kept one, but she thought nothing of it, and after saving a copy to her hard drive, she opened it up.

She scanned quickly through the code, looking for the section she’d been working on, so preoccupied with figuring out how to manipulate it into doing what she wanted, she nearly missed the strange command, her eye travelled straight past it. But then she hesitated, and went back to the unusual group of letters. They hadn’t been there before.

A logic bomb? Some little joke Andy was playing?

She ran the command and it brought up a whole section of Bellona that she’d never seen before.

“Bloody hell -” For a moment she simply stared at the screen.

It was no joke.

a Rafflecopter giveaway
Posted by Andi at 6:48 AM