Please give a warm welcome to author Susan Rae. This outdoors-loving thriller writer recently released her second book in the DeLuca family series. Find out more about it, and her! Thanks for stopping by!

The main inspiration for this book came from my award winning first novel, heartbeats. I wanted to write a sequel about the Chicago Cop family I created in heartbeats. I remembered that one of the DeLuca siblings was a paramedic and I thought it would be interesting to write about how she fit into the cop family’s world. I actually had to look within my own novel to find her name. Once I had that, the rest of the inspiration came from news articles I read, and also from the experiences of my family and friends. Readers might be interested to know that heartbeats was originally released long before the TV show Blue Bloods first aired and I already had one-hundred-and-fifty pages of ICE blue done before Chicago Fire came on the air. If you like those shows, you should definitely like heartbeats and ICE blue!

Which characters spoke to you the most?

I’d have to say Angela, the heroine. She is dealing with a difficult loss, but instead of pulling into herself, she reaches out to help others, not only as part of her job, but during her off hours as well. When a young immigrant woman comes to her for help, Angela can’t turn her away, even though by helping her, she might be putting herself in danger.

It is very hard to choose. I love creating the scenes with the magic moments, like when the puppy finds the baby, or when the baby wraps its little hand around Angela’s finger, or Troy and Angela’s first kiss, or the first time they make love, or even the final climactic scene. Like I said, it’s hard to choose!

This is the second book in which these characters have appeared. Will we see them again?

Yes, in the third installment of the series, TRUE blue. However, Troy and Angela will take a back seat as Police Lieutenant Joey DeLuca, Jr., Angela’s oldest brother, and his detective wife, Andi, step up to the plate. When a woman from Joey’s past shows up, questions arise that threaten to bring down the entire DeLuca family as well as destroy Andi’s and Joey’s marriage. I decided to make TRUE blue about them because I thought it would be interesting to combine a good suspense story with a love story that involved two people who are already married, but face a crisis of trust and have to find their way back to love.

Currently, I’m just working on getting the DeLuca series wrapped up and getting it out to readers, although I do have a few ideas swirling around in my head.

You are an avid reader. What are you reading right now? What is next on your TBR list?

I have to admit, I don’t have a lot of time to read, lately. However, I am looking forward to taking a little time out to sit by the pool this summer and catch up on the latest works of some of my favorite authors, including Tom Clancy, Mary Higgins Clark, and Sandra Brown, as well as some of my fellow Chicago North RWA authors.

You write a lot of romantic suspense. What is it about this genre that you like so much? Have you ever considered writing in another genre?

I love being able to combine a spicy romance with a gritty suspense story. I find intertwining the two stories and making everything come out all right in the end quite challenging. I have dabbled a little in Children’s Literature and have also written an historical suspense novel, but I think in the future, along with the romantic suspense novels, I might write some women’s literature—stories that explores women’s lives and their relationships with others that aren’t necessarily wrapped around a romance. There is actually a little bit of Chic Lit in the DeLuca Series as the three heroines, Elizabeth, Angela, and Andi interact within the novels.

You love the outdoors and try to incorporate a lot of your favorite places in your novels. What are some must-see destinations that you recommend to readers?

Most of my outdoor travels have been in the U.S. as my husband and I travel around in our motor home. Must-sees? Dolphins swimming in the morning sun in the surf off of the Outer Banks, North Carolina; the green flash at sunset from the beach at Sanibel Island, Florida and again in Door County, Wisconsin; the picturesque Shenandoah Valley from the Blue Ridge Parkway in Virginia; the mighty Mississippi from the bluffs at Wyalusing State Park, Wisconsin; the upper mountain plains of both Colorado National Park and Bridger State Park, Wyoming from horseback; and the waterfalls cascading down the sheer mountain face from a canoe while paddling on Two Medicine Lake in Glacier National Park, Montana.

Travel up the west coast, and then perhaps on to Alaska.

I love sports, both as a spectator and as a competitor. My current sport of choice is golf. There’s nothing like whacking a golf ball around the course to get out your frustrations when you’re trying to wrangle a couple of characters into shape.

I would just like readers to know, that even though ICE blue is the second book in the DeLuca series, you don’t have to read heartbeats to enjoy ICE blue. Each book has its own hero and heroine as well as its own gritty suspense storyline which is complete within the book. To get more information and read excerpts from all of my books, please visit me at www.susanrae.com.

Thank you, Andi, for having me. This was fun! 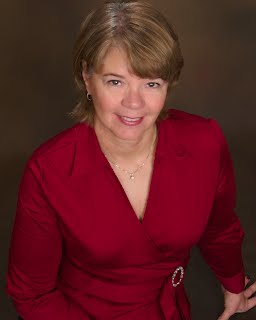 I write, basically, because I just can’t help myself.  I can't resist the challenge of taking the intriguing characters and storylines that pop into my head and fleshing them out into compelling manuscripts.  Romantic suspense is a natural to me, because it allows me to combine a sexy, passionate love story with a gritty suspense tale—in my opinion, the best of both worlds. It also lets me express my appreciation for the outdoors in the settings which I recreate on the page.
Freefall, my second novel, takes place in Wisconsin's Kettle Moraine Forest and beautiful Door County. ICE blue returns to the busy streets of Chicago and the shores of Lake Michigan to continue the story of the DeLuca family which began in my award winning first novel, heartbeats. I am currently working on the third book in the DeLuca series, TRUE blue, due out in 2014, where it seems my characters must take a trip to Montana’s majestic Glacier National Park.
When I’m not sketching characters or working out plot problems, you might find me on the golf course working on my handicap. I also enjoy traveling around the country seeking out new settings for my novels with my husband and my empty nest puppies, Ginger and Nikute.  To read more about my novels and the writing life, please visit my website/blog at www.susanrae.com 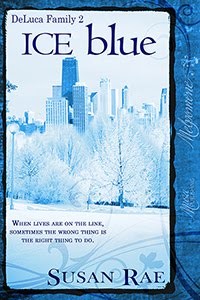 
When lives are on the line, sometimes the wrong thing is the right thing to do.

Born into a Chicago cop family, Angela DeLuca gets her rush from saving lives while her brothers get theirs from catching the bad guys. A tough beauty with a heart perhaps too big, she champions the underdog because, as the youngest of six siblings, she often felt like one.

ICE Special Agent Troy Deavers became a cop to prove he wasn’t like his father—a southern politician who brought his family down with greed and corruption. He doesn’t suffer victims well. At first intrigued by Angela’s passion, he soon fears that the fire in Angela’s heart will be her undoing.

What happens when Troy falls in love with the lovely but infuriating Angela, the Chicago paramedic who insists on protecting a young witness and her unborn baby—a witness who could break his case wide open?

You met the DeLuca family in heartbeats, now come to know them even better in ICE blue.