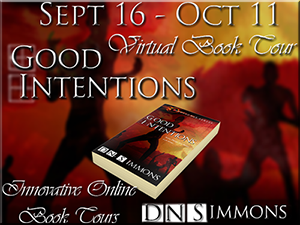 Scitech Labs was handsomely commissioned by the United States Military to design a revolutionary serum that would create the ultimate soldier. If successful, the soldier would have an increase in endurance, strength, awareness and overall speed. They would become the true super soldier. That's if everything went according to plan.

Scitech put its best scientists on the project and gave them a time limit to complete the job or else. With the pressure on and the stakes high, Vincent Masterson and his team put everything they had into the project. . Everything was looking hopeful until an experiment went horribly wrong. The scientists mutated their specimen's DNA, turning it into something monstrous. Now, life as we know it will never be the same.

As it stands, the only thing that can save them is one of the two things they should be running from.

Can the human race survive being caught in a bloody war between two vicious predators?

D. N. Simmons lives in Chicago IL., with a rambunctious German Shepherd that's too big for his own good and mischievous kitten that she affectionately calls "Itty-bitty". Her hobbies include rollerblading, billiards, bowling, reading, watching television and going to the movies. She has been nominated at Love Romances and More, winning honorable mention for best paranormal book of 2006. She has won "Author of the Month" at Warrior of Words. She was voted "New Voice of Today" at Romance Reviews and "Rising Star" at Love Romance and More.

To learn more, and have the opportunity to speak with the author personally, please visit the official website and forum at www.dnsimmons.com . D.N. is always interesting in meeting new and wonderful people.