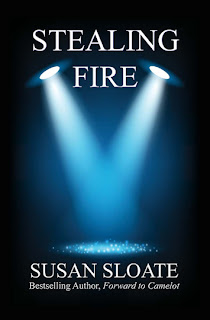 “How do you recognize your soulmate?

In glittery 1980’s Los Angeles, Beau Kellogg is a brilliant Broadway lyricist now writing advertising jingles and yearning for one more hit to compensate for his miserable marriage and disappointing life.

Amanda Harary, a young singer out of synch with her contemporaries, works at a small New York hotel, while she dreams of singing on Broadway.

When they meet late at night over the hotel switchboard, what begins will bring them each unexpected success, untold joy, and piercing heartache ... until they learn that some connections, however improbable, are meant to last forever.

STEALING FIRE is, at its heart, a story for romantics everywhere, who believe in the transformative power of love.”

STEALING FIRE was a Quarter-Finalist (Top 5%) in the 2012 Amazon Breakthrough Novel Award Contest.


The phones were ringing off the hook, and it was after three. And Amanda was tired.

She disposed of all the calls; she didn't think she could be bright and bubbling tonight. As she started to put down her headset, she realized she'd left one call on hold; the red light winked tantalizingly at her. She pushed the button, and was startled to hear a light, clear whistle delicately sounding one of her favorite old songs.

For a moment, she just listened. Then she started to hum along, filling in the words where she could remember them.

The whistling stopped, and the voice she'd come to recognize and dread pushed out at her. "So you know it."

"It's one of my favorites." She hummed a few more bars, hesitatingly. "I've known it for years."

"Remember the title?" It was a challenge.

"`Bursting Bubbles'." That was easy. She remembered the scratchy old record that Josie had broken years ago. Even now she felt a small pang at losing it. "From a show called The Life and Times."

He chuckled. "So you know who I am. That makes you one up on me. I don't know who you are."

"Why do you want to know? Gonna complain to the boss?"

"I wanted to thank you. I don't often have a chocolate shake for breakfast, but it really hit the spot this morning. I never get service like this, not even at the Lorelei." 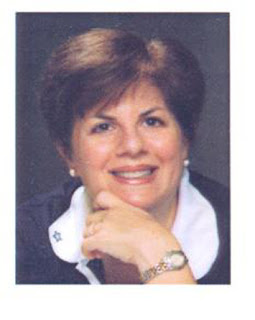 Susan Sloate is the author of 20 published books, including FORWARD TO CAMELOT (with Kevin Finn), an alternative history of the JFK assassination, STEALING FIRE, an autobiographical love story, and REALIZING YOU (with Ron Doades), for which she invented a new genre – the self-help novel. FORWARD TO CAMELOT was a #6 Amazon bestseller, took honors in 3 literary competitions and was optioned for film production by a Hollywood company. STEALING FIRE was a quarter-finalist in the 2012 Amazon Breakthrough Novel Award Contest. Susan has also written young-adult fiction and non-fiction, including RAY CHARLES: FIND ANOTHER WAY!, which won a silver medal in the 2007 Children’s Moonbeam Book Awards, AMELIA EARHART: CHALLENGING THE SKIES, a perennial Amazon bestseller, and MYSTERIES UNWRAPPED: THE SECRETS OF ALCATRAZ, which led to her appearance on a special for The History Channel in 2009, as well as books for five girls’ fiction series. As a screenwriter, she has written an informational film for McGraw-Hill Films and optioned two scripts to Hollywood production companies. As a sportswriter, she’s covered the Los Angeles Dodgers, the Pittsburgh Pirates and the New York Mets. She’s also managed two recent political campaigns, founded the East Cooper Authors Festival (which put 18 professional authors in 17 area schools in one day) and serves on the Culture, Arts and Pride Commission of the Town of Mount Pleasant.


Susan will be awarding a notebook perfect for journaling to a randomly drawn commenter during the tour. 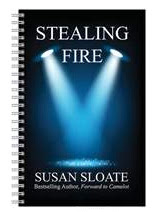 Follow the tour for more chances to win!
Posted by Andi at 3:30 AM