Read an exclusive excerpt from 'Special Offers' by M.L. Ryan 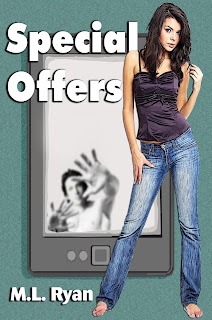 Meet Hailey - possessed by an otherworldly being who was trapped in her Kindle.

Hailey Parrish was quick-witted, irreverent, and hadn’t had a date in three years. She only wanted an eBook reader because her collection of paperbacks threatened to take over her small living space. Little did she know that the "special offers" that prompted the purchase included much more than a reduced price in exchange for a few ads. The device came pre-loaded with the essence of Sebastian Kess, an erudite womanizer with magical abilities from a parallel dimension. When she inadvertently releases him and he inhabits her body, she finally has a man inside her, just not in the way she imagined. And soon her predicament introduces her to yet another supernatural, the handsome could-be-the-man-of-her-dreams Alex Sunderland. Can Alex and Hailey find a way to return Sebastian to his own body, stay one step ahead of the criminals who want to keep him where he is, and not lose their sense of humor?

I was about halfway through my route when I noticed a man jogging toward me. He was still at least a hundred feet in front of me, but even at that distance I could tell he was tall and incredibly fit. He ran like he could go forever without breaking a good sweat. Bastard.

It wasn’t long before our paths crossed and as they did, we gave each other the obligatory small nod that joggers give in greeting. I was right about the general lack of perspiration. All he had was the slightest glow of moisture on his forehead.

About 10 feet further down the path, I tripped. I’m really not sure on what, but then again, I wasn’t really paying attention to where my feet were landing while I mentally dissed No Sweat Bastard. I tried to prevent the inevitable fall but only managed to look even clumsier as I ended up wind-milling my flailing arms before landing on my knees. My now skinned flesh was encrusted with bits of gravel and hurt like hell.

“Son of a bitch,” I groaned as I rolled onto my side.

“Are you okay,” someone said as they jogged up from behind. “You took quite a tumble.”

I looked up into the bluest eyes I had ever seen. Who the hell has cornflower blue eyes? Great. He doesn’t sweat while exercising and he has freakishly gorgeous eyes. And he just got to witness me take a header into the macadam.

“I’m fine. Just skinned up and massively embarrassed. I must have looked ridiculous.”

“Not at all,” he countered as he offered me a hand up. “Well, actually, I didn’t really see anything as you were behind me. I heard you, but by the time I turned around you were already down.”

I declined the help, stood up and dusted myself off. Close up, I now realized how tall he really was. He had to be at least six-five and I had to step back a bit to be able to look him in the face without craning my neck. His golden blonde hair was medium length and styled back from his face and was sun streaked with almost silvery highlights. Not perfect features by any means; his nose looked like it might have been broken at some point; not exactly crooked, but a bit flattened toward the bridge and he had a thin, barely visible scar from bottom of his left nostril down to the top of his upper lip. But all in all, he looked…nice.

“Are you sure you’re alright, you’re kind of oozing,” he mused as he surveyed the damage to my knees.

Looking up from my tattered skin, he smiled broadly. Don’t get me wrong, he was a good looking guy. But when he smiled, his whole face lit up and was transformed into something glorious.

“Uh, yeah, I guess I’d better get home and clean these off. Thanks for stopping.”

“I live nearby, so this is one of my go to morning jogs. Do you live around here?”

Oh god, could I be more lame? Do you live around here. Shit. I sound like I’m in junior high.

“No, I’m here temporarily. I’m staying at a hotel about three miles from here. I figured I would go up to the bridge ahead and turn around,” he said, gesturing toward the bridge about a quarter mile further along the path. “Maybe I’ll see you again sometime.”

He gave me another one of those dazzling smiles and jogged off. I watched him for a few seconds as he continued on his way. He had a nice body too, lean but well-muscled. For an instant I contemplated following him or waiting where I was until he came back this way.

“You really are pathetic,” I said out loud.

Also available on iTunes
and CreateSpace 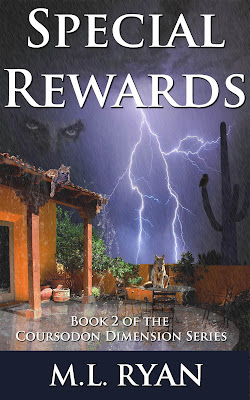 Available at the following links: 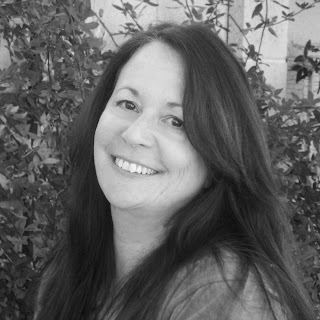 M.L. Ryan is a profes­sional woman – not that she gave up her amateur status, but rather that she is over-educated with a job in which she spends a lot of time writing dry, science non-Fiction. In an effort to strength­en the less logi­cal side of her brain, she decided to write some of the many stories rolling around in her head. She lives in Tucson, AZ with her husband, son, four cats, two dogs and an adopt­ed Desert Tortoise.

M.L. will be awarding a $25 Amazon gift card to a randomly drawn commenter during the tour.  Follow the tour for more chances to win!
Posted by Andi at 3:30 AM