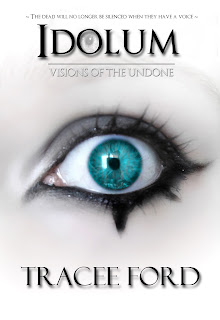 Dr. Lauren Harris, a brilliant and nationally respected forensic psychologist, is called upon by the FBI to help track down and stop the The Phantom, a hedonistic serial killer who is burying his victims alive. She is teamed up with Nicholas Bennette, an agent who has been promoted to the directorship of a Southwestern Ohio field office. They find it difficult to work with one another at first,but as time passes a romance blooms.

Lauren has a special secret. She's an empath and to solve the crime, she must not only rely on her training and education, but also her supernatural abilities. Through her visions she can see through the eyes of the victims and hopes to give a voice to the dead, peace to their families, and ultimately stop the killings. However, making sense of the visions proves to be one of the most difficult challenges she faces. Lauren is sometimes overwhelmed by the victims'feelings that so much in their lives have been left undone.
As time passes and the body count rises, Lauren fits the puzzle together and discovers the identity of the killer. She soon learns she too has been targeted by The Phantom and comes face to face with him. When Lauren Harris finds herselfat his mercy, she realizes she’s left much undone in her own life.

Join us as we celebrate the release of Idolum by Tracee Ford. We're partying it up Friday September 13th from 8-10 pm EST. I have tons of spooky games planned!!! It's going to be so much fun!

About the author:
Tracee Ford is a member of the Paranormal Romance Guild and her work is published through Injected Ink Productions, an imprint of PDMI Direct Publishing.

Ford is also a playwright, director, and puppeteer. She has written scripts and directed plays for local churches as well as for local community activities to bring awareness to children about body safety.

Ford is an Ohio country girl turned author. She began writing at the age of sixteen. Early works included poetry and nonfiction. Ford's nonfictional writings focused on her areas of study as an undergraduate in social sciences and psychology at Shawnee State University. She completed more nonfictional research while working on a master's degree in forensic psychology through The University of North Dakota.