Writing a Murder Mystery: Motives for Murder by J.C. Gatlin, author of 'Prey of Desire'

After revealing “Who Done It,” the most important piece of the puzzle in a good murder mystery is “Why Done It.” The Antagonist’s reason to commit murder and hide it must be creative, make sense and be ultimately satisfying to your reader. So, it got me thinking: What are some basic motives for murder?

1. To hide a secret. This is the most obvious motive. The Victim stumbles upon the Antagonist’s closely guarded secret, and he kills her so she won’t reveal it.
2. Greed. The Antagonist wants the victim’s fortune, property or something else of value… and is willing to kill to get his hands on it.
3. Revenge. The Antagonist wants to even the score for some past wrong doing (which is often detailed in the prologue) and the victim pays the price.
4. Obsession, Frustration & Hate. Have you hugged a sociopath today? This is a great opportunity to expose your Antagonist’s prejudices and/or deep-seeded obsessions.
5. Love, Sex & Jealousy. Maybe this should be motive #1. At least it seems like it in real life if you watch any of the murder investigation documentaries on cable television. Does it even need an example? Pick a love triangle and you’ve got a motive.
6. Crime of Passion. Your Antagonist’s anger gets the best of him, and he snaps in a fit of rage. Generally, everyone is shocked by his actions, as he seems like the last person on the planet who’d ever commit such a heinous murder. Often the Antagonist doesn’t remember what happened, as he was out of his head at the time.
7. Psychosis & Mental Disorders. The Antagonist is detached from society (maybe even humanity) and does something unthinkable, generally for reasons that are just in his head.
8. To protect personal status. Your Antagonist is very threatened by the Victim’s success, talents or attention, and commits murder to balance the scales.
9. To protect a loved one. You would do anything for your kids, including murder if someone was hurting one of them. Well, so would your Antagonist. And sometimes loved ones moves beyond family, or even people.
10. Empathy or Sympathy. The Antagonist doesn’t have malicious intent; in fact, he’s acting (or believes) in the Victim’s best interest. .

JC Gatlin lives in Tampa, Florida. He’s written two mystery-suspense novels: The Designated Survivor and Prey of Desire. He also maintains a blog about the art of spinning a nail-biting, edge-of-your-seat mysteries at www.jcgatlin.com. 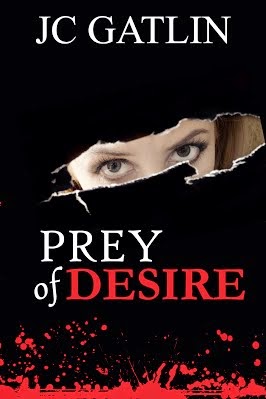 They said the disappearance of two high school students over 25 years ago was mystery that couldn't be solved.
No one ever said it shouldn't be.

Following the abrupt end of a relationship, college student Kimberly Bradford finds comfort in the friendship with her over-the-top neighbor, Mallory. And, Mallory encourages her to get back out there. She would of course if it weren't for the thrilling little love notes and gifts she's been receiving .

Kim thinks they're from her ex-fiancee, not realizing he's been murdered. Worse, whoever is sending her all the extra attention is not only in her inner-circle, but has a connection to that unsolved murder some 25 years ago. That connection puts her life in danger, and exposes secrets better left buried around her closest friends and family.

"That was close." Mallory laughed, pushing Kim out the diner doors and onto the sidewalk. They crossed the intersection against the light and headed back to Mallory's parked Miata. Making it clear that she was not pleased, Kim walked several steps ahead. She crossed her arms, swinging her purse. Mallory caught up to her, telling her to slow down.

Kim picked up her pace. "I can't believe you tried to set me up with that old psychologist again. You just don't know when to quit, do you?"

"He’s a psychiatrist, and…” Mallory grabbed her arm to slow her down. “Stop being so melodramatic."

"Melodramatic?" Kim whipped around to confront her friend face to face. "Not only did you ambush me, but this is the second time he's stood me up - second time in a row!"

"He just got detained with another crazy patient, that's all." Mallory punctuated that with a light, throaty chuckle. "The whole town is freaked out over the Congressman's murder so it's understandable.”

"You're changing the subject." Kim turned and stepped off the sidewalk into the street. She headed toward the car parallel parked in front of a meter. Mallory followed her into the oncoming traffic.

“Would you just wait?” She grabbed Kim’s arm again. Mallory stopped her in the middle of the street. A car honked and swerved around them. Oblivious, Kim pointed a finger at her and leaned forward.

"You sandbagged me with another blind date. You know I’m involved."

"Ross went M.I.A. on you, what, six weeks ago? He’s gone." Another car blared its horn. Malloy waved it away. "I just wanted to get your mind off it. Besides, Dr. Whitman has lined up a very exciting date."

"Listen to me, Kim. He's really been putting a lot of pressure on me lately. He's talked about you for ages and he's been asking me to set you two up for a long time. Ever since..."

Breaks squeaked on a truck as it swerved to miss them. Kim ignored it. "Ever since what, Mallory? Since Ross dumped me?"

"No - since Ross disappeared." Mallory paused. Her eyes softened and a faint smile crossed her lips. "Kim, he's not coming back."

Kim was about to protest. It was a knee-jerk reaction to tell Mallory how wrong she was. For a moment, Kim considered explaining about the mysterious poems and the invitation for dinner on Friday night. She wanted to tell Mallory about the phone calls. All those cryptic messages and notes – it had to be from Ross. It just had to be. They were meant for each other.

Instead Kim looked down at her feet and sighed. "I'm just not in the mood to be sweet and sociable. You know what I mean? I'm angry. And I want to hit something. I want to rip something apart and stomp on it and crush it and..."

Another car honked and the driver screamed obscenities as he whizzed past. The girls were unfazed standing in the center of the road.

"Exactly my point." Mallory snapped her fingers, seemingly very pleased with herself.

"That's why this handsome, debonair psychiatrist suggested a double date at a mock war camp."

"A mock war camp," Mallory repeated. "Instead of miniature golf or going to a movie, we'd play weekend warrior."

Kim hesitated, watching her a moment, then followed. "What kind of date is that?"

“The kind that’ll get you over Ross!” Mallory headed toward her Miata parked at the curb. Unlocking the car door, she paused and leaned against the hood. She turned back toward Kim.

"It’s the kind of date where you can be tank girl and rip men apart and blow them away and stomp on them... only with paint pellets." Mallory’s eyes enlarged and she took a breath, as if waiting for Kim to protest. When she didn't, Mallory continued. "He's a head shrink, Kim. He knows about these kind of things."

Coming from a large family with five brothers, JC grew up in Grapevine -- a small Texas town just outside of Dallas. He moved to Tampa in 1999, and most of his stories feature the rich landscapes of Texas and Florida as backdrop.

a Rafflecopter giveaway
Posted by Andi at 9:52 AM