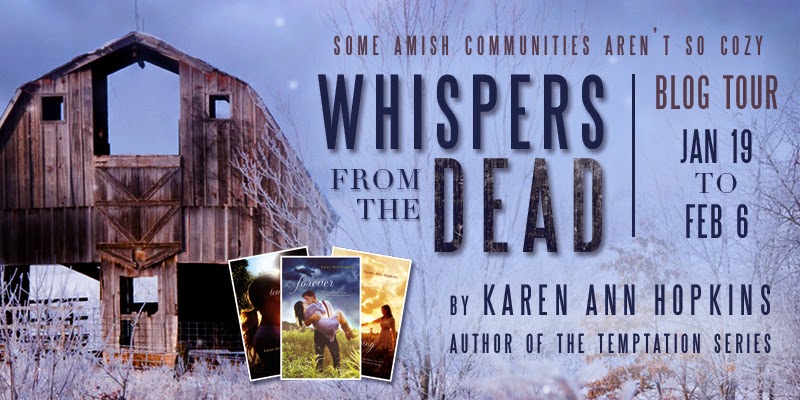 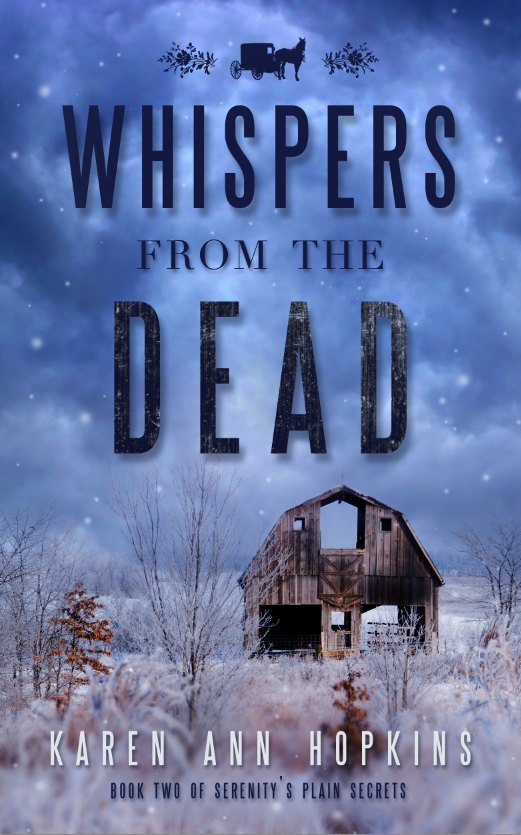 Whispers From the Dead

Some Amish communities aren't so cozy.

Whispers From The Dead is the powerful and thrilling sequel to Lamb to the Slaughter, in the Amish mystery series, Serenity’s Plain Secrets.

Sheriff Serenity Adams and Daniel Bachman are once again partnered up in a criminal investigation, when they travel to a northern Amish settlement that has been riddled by arsons for the past two decades. Serenity quickly discovers that there is much more going on than just barns being set on fire in the touristy community, and that the new group of Amish has their own secrets to hide. She begins to unravel an extensive criminal underworld that threatens to destroy everything that the simple people of Poplar Springs hold dear and once again puts her own life in jeopardy.

And even though Serenity tries desperately to avoid it, things begin heating up between her and Daniel, making her wonder if true love and happiness are really within her grasp.

Karen Ann Hopkins has a knack for creating atypical worlds in Amish literature. While most of us who read Amish literature are used to the worlds created by the originals, such as Beverly Lewis, Beth Wiseman, etc., with more innocent romance and intrigue, Hopkins shows us another side to this quiet community. We already know that people are not perfect and that secrets can rule, especially in small towns. But murder and arson? This series takes it to a whole new level.

Serenity is a sharp detective, capable of putting together pieces that others have not yet found. She is still sorting out a lot in her personal life, figuring out her own beliefs and feelings, while also still healing from her past. She tends to be pretty good at not letting her past interfere in her investigative duties, though she is fully aware of its influence at all times. You can see some growth in her from the first book and can easily expect to see some more as this series progresses.

Daniel is still beneficial to her investigations, thanks to his own past. He also packs some intense heat in his affections. While you still see glimpses of his past, sometimes it is hard to believe he grew up Plain.

I found this book to be quite the page-turner. The only thing preventing me from reading it all in one sitting was that work thing that tends to get in the way of my book time. It flowed well, chapters broken up in such a way that you immediately wanted to move on to the next one to find out what was going to happen next.

A lot of the twists leading up to the solution do provide plenty of clues to help you quite possibly figure out whodunit ahead of time, if not at the same time as Serenity, et. al. It's the details of the final reveals that are not as easy to deduce ahead of time.

I do feel that this book could stand on its own, as there are plenty of references to the first book for clarification, but I would recommend reading Lamb, first. That way you truly understand from where Serenity is coming, and how she got to where she is today.

The only thing with this book that throws me off, as do all of Hopkins books, is that I don't get the same genuine Amish feel from those characters that I do in books by those aforementioned authors. Hopkins doesn't resort to using the authentic Pennsylvania Dutch verbiage, but I know she has done a lot of research into the communities she has created. This is not a bad thing. It's simply a different style of writing, but I point it out to those who are seeking those traditional Amish books. These simply are not those traditional ones. But, if you are also a big fan of mystery and suspense, give this series a shot. I truly love reading it and am now anxious for the third book to come out! 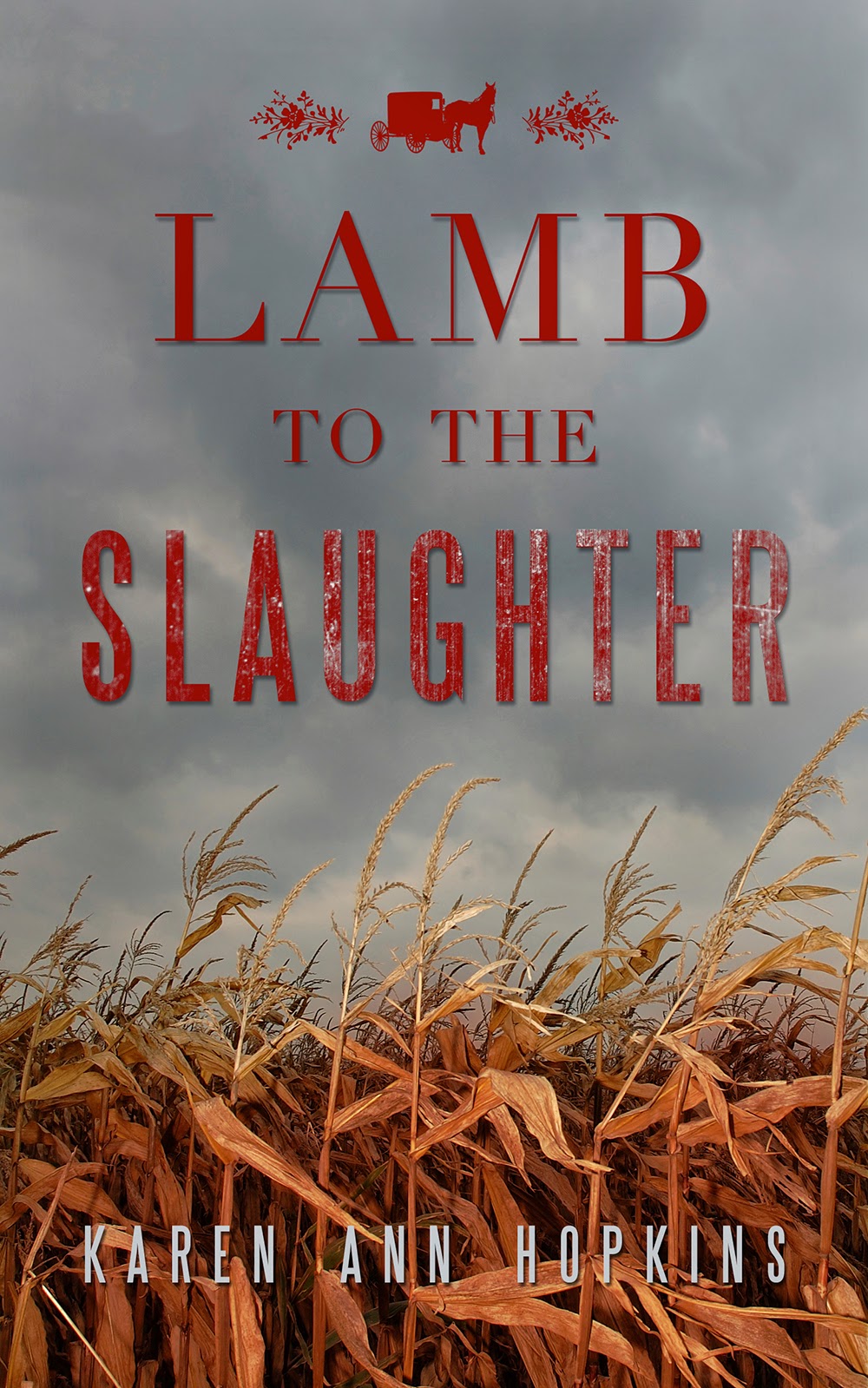 Lamb to the Slaughter (Book #1)


Lamb to the Slaughter is a story about the intertwining lives of three unlikely people in an Indiana Amish Community and the devastating results when a rebellious teenage girl is found shot to death in a corn field during the harvest.

Serenity Adams is the newly elected young sheriff in the country town of Blood Rock and besides dealing with the threatening behavior of her predecessor, she now has a dead Amish girl on her plate. At first glance, the case seems obvious. The poor girl was probably accidently shot during hunting season, but when the elders of the Amish community and even the girl’s parents react with uncaring subdued behavior, Serenity becomes suspicious. As she delves deeper into the secretive community that she grew up beside, she discovers a gruesome crime from the past that may very well be related to the Amish girl’s shooting.

Serenity enlists the help of the handsome bad-boy building contractor, Daniel Bachman, who left the Amish when he was nineteen and has his own dark reasons to help the spunky sheriff solve the crime that the family and friends who shunned him are trying desperately to cover up. Serenity’s persistence leads her to a stunning discovery that not only threatens to destroy her blossoming romance with Daniel, but may even take her life in the end.

A native of New York State, Karen Ann Hopkins now lives with her family on a farm in northern Kentucky, where her neighbors in all directions are members of a strict Amish community. Her unique perspective became the inspiration forthe story of star-crossed lovers Rose and Noah. When she’s not homeschooling her kids, giving riding lessons or tendingto a menagerie of horses, goats, peacocks, chickens, ducks, rabbits, dogs and cats, she is dreaming up her next romantic novel.

We have a really exciting prize package for this tour, so make sure to follow along for more chances to win every day! What’s up for grabs:


Please enter via the Rafflecopter form. Giveaway is open INTERNATIONALLY.