Read an excerpt from Darkview Part One: Psychosis by RJ Bathgate & MJ Hall 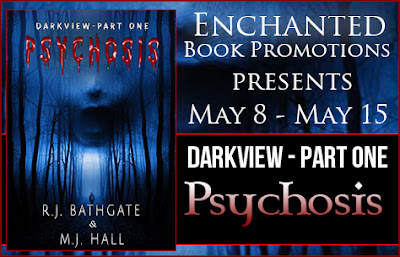 Welcome to the tour for Darkview Part One: Psychosis by R.J. Bathgate and M.J. Hall. Take a deeper look into this paranormal horror story and enjoy an excerpt. You can even check out a special book trailer. Then remember to download your copy on Amazon!

Please note that affiliate links are present within this post. Should you make a purchase through one, I may earn a small commission to support my websites, at no additional cost to you. 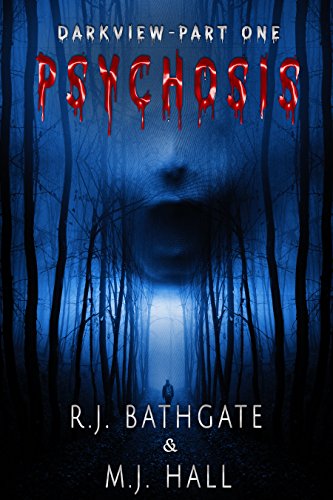 The sleepy, isolated spot bears a sinister, horrific history, shrouded by a chilling secret. A secret one man must unveil, which will ravage his soul ... and sanity!

Jack Cyrus is in damnation!

After witnessing the 1994 Rwandan Genocide, he has become plagued by dark memories and devilish visions, the result of post traumatic stress.

After returning home to Scotland and compounding his trauma, he is faced with the sudden death of his wife, from cancer.

On the sixth anniversary of his wife's death, Jack receives a cryptic, hand written letter from her, telling him she is still alive. Suffering and held captive, she pleads with him to return to Darkview, the place she spent her last days, and rescue her from purgatory.

Upon arrival in Darkview, strange things start happening, and what appears to be a centuries old mystery, starts unravelling itself.

Jack must piece together the clues and lost fragments of his sanity to solve the unravelling mystery.

Is any of it real, or is it just a manifestation of Jack's mind, or another facet of his schizophrenia?

Turning around slowly, Jack saw a tall man with a grey beard standing before him. The hood of his large yellow cagoule covered his eyes. His heavy breath stank of what smelt like dried prawns and stale whisky.
‘I’ll ask you again! Can I help you, Jack?’
Staggered by the use of his name as well as the man’s hostile tone, Jack looked closer and noted a red substance coating the man’s cagoule and washing onto his boots, as the rain battered him.
‘How do you know my name?’ Jack probed.
‘You’re Jack Cyrus—Chloe’s husband. Don’t you remember me? I used to take you and your dad out fishing way back… when you were just a kid.’
Jack couldn’t remember. ‘Look please, I’m stranded!’ he digressed, exasperated. ‘I’ve had a hell of a day! I just need to use your phone.’
‘Sure, go ahead!’ the man said. ‘The power’s out. But there’s a battery operated CB radio. You can pretty much contact anyone in Darkview with that.’
‘Thanks. Sorry, what’s your name?’
‘Jake Malloy.’
Jake entered the cabin and Jack followed him inside. Jake’s heavy footsteps rocked the boat as he led the way to the front of the cabin.
‘So, Jack, tell me! Where’ve you been all these years?’ He didn’t give Jack a chance to answer, as he fired another question. ‘What you doing out in Darkview at this time of night?’
Jack glanced at his watch. It read one o’clock, but it was obviously wrong. Looking up, he saw an old wooden clock above the bow window was showing the same time. He was baffled as he turned to face Jake. ‘Look, Jake, I don’t mean to be rude, but I’m tired, cold, and I’ve had a bad day! I just want to get to where I’m going, have a drink and get some sleep!’
‘Sorry I asked!’ Jake replied. He put the radio to his mouth and said to Jack, ‘Who do you want me to contact?’
Jack put his hand in his pocket and removed Jimmy’s business card. ‘Can you call this garage for me?’ Jack asked, handing the card over.
‘No problem.’ Jake spoke into the radio. ‘This is Burnt-Alive to Jim-Bob, come in, over!’ The radio hissed static back at him. ‘I know you’re there, Jim-Bob, pick up, over!’ he tried again.
A thud, followed by a scream, interrupted the interference on the radio. It appeared to come from below the cabin. Jack looked startled but Jake didn’t flinch. He handed the receiver to Jack as if nothing had happened.
‘Gimme a sec, do you know how to work one of those things?’ Jake asked nonchalantly.
‘Aye.’
Jake made his way to a trapdoor at the back of the cabin and picked up a bloodstained meat cleaver from the table top on his way past. Then he disappeared down the trapdoor…

Read an interview with the authors here.

About R.J. Bathgate and M.J. Hall


R.J. Bathgate, born and bred in Scotland, is the creator and co-author of Darkview: Psychosis. A father of two, and enormously proud of his heritage, he has studied psychology, social sciences, and is currently working towards an advanced diploma in psychotherapeutic counselling and hypnotherapy. His heart lies with new experiences and an interest into the unknown, particularly with writing. He has travelled the world from the dusty, wildlife-filled plains of Zambia, to the glaciers of Alaska, and the soaring peaks of the Canadian Rockies. He is extremely fond of NHL ice hockey, video games, good films, fine wine, and Jack Daniels. He originally wrote Darkview as a screenplay when living in Canada, but upon returning to Scotland, researched mental health issues, namely psychosis and schizophrenia. Inspired by this research, he brought in his lifelong friend, M.J. Hall, to help create a more realistic take on Darkview. The result is a story that combines traditional Scottish history with real life, catastrophic world events, told through the eyes of the protagonist, Jack Cyrus.

M.J. Hall was born in Stockport, Greater Manchester, at the turn of the eighties. Despite being born in England, he identifies more with his ‘adopted’ country, Scotland – he’s lived there since he was four, and his late maternal grandfather was Scottish, too. He presently lives in Edinburgh and is currently studying Environmental Science at the Open University, but has always dreamed of a career in music or writing, or both. He is vegetarian, loves animals (especially cats) and is devoted to his black and white moggy, Tahlula. He humbly admits being just a small voice in a big chorus, and his life changed for the better, or at least would never be the same, when his lifelong and best friend – R.J. Bathgate – invited him to collaborate on Darkview.