Welcome to the blurb blitz tour for Strawberries and Strangers by Leena Clover. I love cozy mysteries, so this one was definitely right up my alley. Please check out the excerpt I am sharing with you, as well as my review of the book. Follow the tour for other excerpts and reviews, plus more chances to win the giveaway. Be sure to leave a comment or a question for Leena!

Please note there are affiliate links included in this post. Should you make a purchase through one, I may earn a small commission to help support my websites, at no additional cost to you. I also received a complimentary copy of this book in exchange for my honest review. 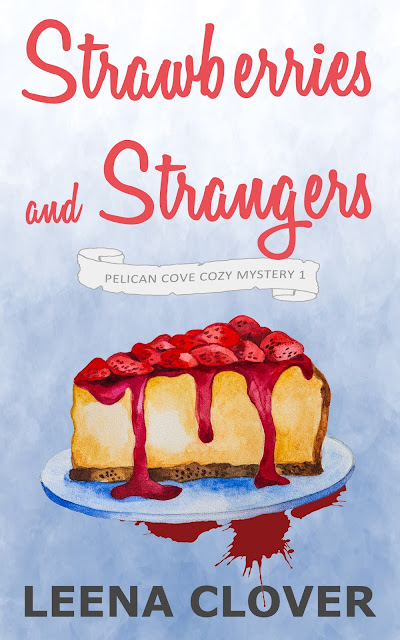 Dumped by her cheating husband, Jenny King is trying to build a new life in the small seaside town of Pelican Cove. Locals are lining up at the Boardwalk Café for her tasty cakes and muffins. But when her aunt is accused of killing a stranger, Jenny is forced to set her apron aside and put on her sleuthing cap. Jenny battles with the cranky local sheriff and quirky local characters to get to the truth. Aided by her new friends, she will move heaven and earth to find out who the dead stranger was and what he was doing in Pelican Cove.

If you like cozy murder mysteries with friendly small towns, scenic settings, yummy food and a touch of romance, you will like Strawberries And Strangers. Buy now and get hooked on the brand new Pelican Cove Cozy Mystery Series. Book 2 and Book 3 are coming soon in May 2018.

“Shall we walk along the beach?” Chris asked the ladies.

“Not until I have a piece of Jenny’s cheesecake first,” Heather said.

She opened her mouth wide and took a big bite of the sinful dessert. It almost stuck in her throat as a piercing scream sounded far away. Heather coughed and sputtered as her food went down the wrong way.

“What was that?” Jenny asked as she patted Heather on the back.

The old biddies had also heard the scream. They surrounded Jenny and Heather, peppering them with questions.

“Hold on, Grandma,” Heather gasped, finally catching her breath. “Chris will be back soon.”

“Bad news!” he declared, raising his hand to ward off their questions. “There’s a dead body on the beach. Eddie’s grandson almost walked into it.”

**My thoughts**
Jenny has moved to the small town of Pelican Cove as a way to start over her life after her husband left her for a younger woman. Her only son is away at college, so the only person she has left is her eccentric aunt, who goes by Star. Jenny has been working at the local cafe, turning it around with her innovative culinary creations. Pretty soon, she finds herself cooking up some clues when a John Doe is murdered and Star is accused of the crime. She knows her aunt is innocent and is determined to prove it.

You get a lot of good background on both Jenny's personal past, as well as the deeply entrenched history of the island and the Who's Who. Lots of quirky characters live there, and we get to meet a fair share of them as the story progresses. There is a complicated history with all of those island families, kind of like in a soap opera or other drama. You also get a sense that Jenny has a past in sleuthing, as Star keeps asking her to do her own investigation. I kept checking again that this book is in fact the first one in the series.

Jenny is an interesting woman. She was so meek when she gave into her husband's demands when he left her. Yet while trying to prove her aunt's innocence, she can be really intense. She is in her early 40s, but sometimes I forgot and thought she was a younger heroine. I think that's because everyone had to keep chastising her for her behavior when asking all of her questions. She does ask a lot of questions to guide the investigation along, despite her arguments with the sheriff, Adam, over it all.

There are some interesting twists and turns in the plot. I think I pretty much had the murderer figured out relatively early, but the motive eluded me until most of those twists were revealed. It is an easy enough read, one I accomplished in a weekend afternoon. I think it is a promising start to this new series and that as the people and Pelican Cove develop, the stories will get better and better.

Leena Clover grew up reading mystery books. Some of her favorite authors are Agatha Christie, M C Beaton and Donna Andrews. Now she is trying her hand at writing whodunnits, making them as nail biting as possible while keeping them cozy. Her love for food is evident in all her books. Readers can find yummy treats in the pages of her books, along with friends that last a lifetime.

Connect with Leena at her website http://leenaclover.com or write to her. She looks forward to hearing from you.

Leena Clover will be awarding a $10 Amazon or Barnes and Noble GC to a randomly drawn winner via rafflecopter during the tour.