Review of Order Up (An Assignment: Romance Novel) by Barbara Valentin with Giveaway

Welcome to the blurb blitz tour for Order Up by Barbara Valentin! In addition to giving you a sneak peek into the book with the blurb and an excerpt, I'm also giving you my completely honest review of this book, which I am enjoying on a warm spring evening on my front porch. Romantic comedies are the perfect companion on these evenings and I'll tell you all about it. You can get other excerpts and reviews if you follow the tour. That also gives you more chances to leave comments and questions for the author, which also means more chances to win the giveaway. Thanks for stopping by and good luck!

Please note that affiliate links are present within this post. Should you make a purchase through one, I may earn a small commission to help support my websites, at no additional cost to you. I also received a complimentary copy of this book in exchange for my honest review. I only share those books that I feel will interest my readers. 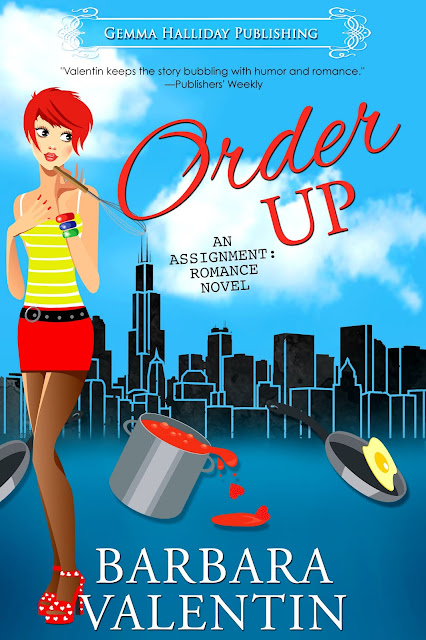 Nancy Braley is the Chicago Gazette's food editor with a taste for hot chefs and talent for replicating their "secret" recipes. But when she finally gets up the nerve to ask out a hot local café owner, Doug Johnston, she's crushed when he says she's not the "marriage material" he's looking for.

Doug is perplexed by his attraction to Nancy whose take-no-prisoners personality reminds him way too much of his cheating ex. To keep Nancy and his conflicted feelings at bay, he throws out the only excuse he can come up with—she's just not marriage material.

Not one to be deterred, Nancy becomes obsessed with figuring out what exactly that means—partly because she doesn't want to emulate her oft-married but divorce-settlement-wealthy mother, and partly because her attraction to Doug is driving her to distraction. So when a married and very pregnant colleague gets put on bed rest until her baby arrives, Nancy volunteers to feed her family, hoping to get a first-hand look at what marriage is all about. And when Doug's ex opens a new coffee shop nearby, stealing business from his café, it's Nancy who comes to his aid! Eager to call Doug's bluff, can she convince him she's the real deal?

With a fresh wave of warmth riding up her neck and cheeks, Nancy folded the yolks into the saucepan, whisking the concoction until it thickened just enough to coat the sides of the pan and her complexion had returned to normal. Handing control over to Doug, she watched as he poured the mixture through a strainer into a metal bowl that he had set in the middle of a larger bowl filled with ice water.

With a nod over to the assembled ingredients, Doug instructed her, "Go ahead and stir in the vanilla."

"How much?" Nancy asked before her brain could stop her.

Doug cut her a look from behind his sorry seventies frames that, had he used the measuring spoons she had offered, might have made her knees wobble.

Shields up, she tipped the vanilla container over the bowl for a quick second before deflecting his mandate with ease. "What is this, Doug? Zen cooking? Next you'll be telling me to use the force."

The next thing Nancy knew, Doug was directly in front of her, holding up a spoon half filled with the sauce. "Close your eyes and open your mouth."

Flustered, she had no sooner closed her eyes and parted her lips than she felt the hard tip of the spoon covered with warm velvety sauce on her tongue. Closing her mouth around it, she pressed her lips against it, just tight enough to prevent any dribbles while he pulled it out.

"Now keep your eyes closed and tell me how it tastes."


**My thoughts**
Okay, first, if it is a book from Gemma Halliday Publishing, it's pretty much a given that I am going to want to pick it up. Second, when it involves a leading man with food, I'm also usually game. Men who can cook or bake well rank right up there with musicians in my life. Bonus points if they are both. Alas, Doug is just a quirky former teacher who has opened up his own cafe, but that is good enough for me.

Another plus in my book is that our heroine, Nancy, is 38 years old. In a market that is inundated with young women in their early 20s finding the loves of their lives, it's nice to have someone closer to my own age. Yes, some of us are single past the age of 30.

Both of these characters are a bit pathetic, but in a way that works. Nancy has had to deal with her crazy mother, who has tried to abandon that title for the past couple of decades, and who is working on her eighth marriage. It's no wonder that Nancy wants to control other aspects of her life. She couldn't get affection from her mother, so she turned to food and used it to get attention from other kids, later adults in her life. It makes sense. And it is no wonder that she is drawn to a man who creates his own majestic concoctions.

Doug had been a married teacher, who finally burned out after the death of his father. And then after giving in to the dream of having his own cafe, his wife abruptly left him. It's no wonder that he is kind of stuck going through the motions, while trying to find out who he really is deep inside. He also has a quirky sense of humor, demonstrated in his t-shirts that read things like, "Lit Happens." He seems like the nerdy kind of guy you wouldn't be able to help but to crush on as you got to know him, especially with his cooking and baking skills.

Of course the two of them are completely attracted to each other, but seem to be completely lacking in the skills necessary to achieve a decent romance in your late 30s. They stumble over their words, say things they don't mean, and make general fools out of themselves. I cringe while I am reading, but it's also because I totally get it and have likely done a lot of the same. They are total opposites in a lot of ways and yet have some very important things in common. And it is those very differences that help them complement each other so well and lay the foundation for a great relationship on a lot of levels. So much of their story rang true for me in a lot of ways, though the ending was almost a little too perfectly rushed.

It's okay, though. It's totally a fun read that was perfect for my front porch. I am new to this series and to Barbara Valentin as an author, but I have a feeling I will soon be back for more. These lighthearted romantic comedies are such a great way to escape for a few hours. 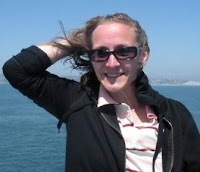 Author of the popular Assignment: Romance series, Barbara was named "Indie Star of 2015" by Publishers Weekly when her first book earned a coveted starred review. A member of Romance Writers of America, she looks forward to the days when her to-do list includes tasks such as “Attend premiere of movie based on my book” or "Accept Godiva's request to be a taste-tester” …much better than “Vacuum hallway” or “Pick up clothes from dry cleaners,” don’t you think?

Barbara Valentin will be awarding a $25 Amazon/BN GC to a randomly drawn winner via rafflecopter during the tour.

a Rafflecopter giveaway
Posted by Andi at 12:26 AM