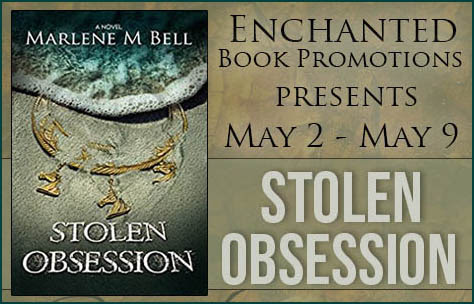 Welcome to the book tour for Stolen Obsession, the first book in the romantic suspense Annalisse series by Marlene M. Bell. Check out the book trailer and an excerpt before you download your copy on Amazon. Also be sure to enter the $50 Amazon gift card giveaway at the end!

PEOPLE DIE, BUT LEGENDS LIVE ON.

Manhattan antiquities appraiser Annalisse Drury dreams of a quiet life on the family farm among the sheep she loves, when her best friend is murdered. The police assume robbery is the motive because her friend’s expensive bracelet is missing. But the 500-year-old artifact is rumored to carry an ancient curse, one that unleashes evil upon any who dare wear the jewelry created for the Persian royal family—and Annalisse believes her friend is the latest victim.

Weeks later, Annalisse sees a necklace matching the stolen bracelet at a gallery opening. Convinced the necklace is part of the deadly collection, Annalisse begs the gallery’s owner to destroy the piece, but her pleas are ignored— despite the unnatural death that occurs during the opening. With two victims linked to the jewelry, Annalisse is certain she must act.

Desperate to keep the gallery owner safe, Annalisse reluctantly enlists the owner’s son to help—even though she’s afraid he’ll break her heart. Wealthy and devastatingly handsome, with a string of bereft women in his wake, Greek playboy Alec Zavos dismisses Annalisse’s concerns—until his parents are ripped from the Zavos family yacht during their ocean voyage near Crete.

Annalisse and Alec race across two oceans to save his mother, feared dead or kidnapped. As time lapses, the killer switches mode and closes in on the man who’s meant for Annalisse with the lifestyle she wants most.

But when it’s her turn as the hunted, will she choose to save Alec and his mother, or sacrifice everything to save herself?

Annalisse set her purse down into the flipped over cushions on the couch, repositioned them, and stepped through what used to be neat stacks, years of gallery research. A groan passed her lips when she walked to the desk marred with new scratches, bereft of her monitor and tower hard drive. She looked around the room for her laptop; it, too, was missing.
Cursing under her breath, she saw her prized possession, a two-foot bronze statue of a shepherdess with a pair of sheep grazing near her feet, lying on its side next to a toppled plant stand. An expensive work of art from Florence she’d had no business buying, but she couldn’t resist. When Generosa had called from Italy describing it, Annalisse had to have it. Everyone who knew her well understood her love for sheep. Even if she’d declined Generosa’s offer to bring it back for her, she’d felt certain the bronze would end up in her hands eventually.
Alec waited by the stairs and whispered, “Your bedroom up there?” He pointed upstairs.
She nodded, lifted the mahogany stand upright and, with both hands, replaced the hefty bronze to its rightful place next to the desk.
“Stay downstairs. You’ll be safer. I won’t be long, and I’ll look for your cat.” Alec hit the first step.
“Be careful.”
Whoever destroyed her home had acted with malice. They had her personal data and internet search history, where she shopped online, email correspondence as well as business contacts. A privacy breach she couldn’t afford. Compiling a list of possible suspects in her head, she felt so violated, even more so than by what had happened with Peter. Names and faces blurred together. With fingertips pressed at her temples, she willed the jackhammers in her head to stop.
Raising her arms, as if a make-believe thief told her to, she said, “I give up. I may as well set a match to this place, for all the good it’s going to do me now.”
Alec uttered a sentence upstairs she couldn’t make out.
“Alec, did you find Boris?”
The sound of shuffling filtered downstairs then a thump.
“Alec, what fell?” She looked up at an empty landing.
The unnatural silence pricked the hairs straight out on her neck. “Answer me.”
A mechanical voice broke the silence. “Don’t move.”
She stopped breathing and froze, afraid to look up, but then looked anyway.
A figure in a brownish ski mask and desert camouflage occupied the top of the staircase. Holding Alec. He—or she— held him at gunpoint. One arm cradled Alec’s waist and a black pistol so close to Alec’s right ear, his curls hid part of the barrel.
She’d expected Alec’s expression to be as wild as hers must have been, but he appeared strangely calm.
“I’m all right, Annalisse.”
“Shut up.” The voice was distorted with some kind of voice altering mechanism. Deep tones, similar to a bumblebee in distress. 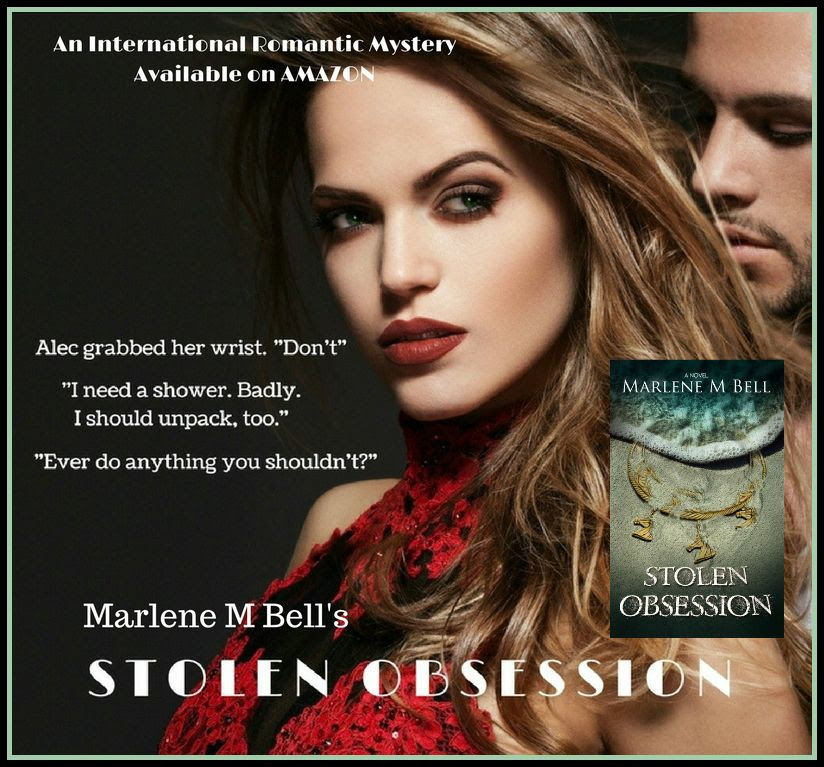 Marlene M Bell is an acclaimed artist and photographer as well as a writer. Her sheep landscapes grace the covers of publications such as, Sheep!, The Shepherd, Ranch & Rural Living and Sheep Industry News. Ewephoric, her mail order venture, began in 1985 out of a desire for realistic sheep stationery. A color catalog of non-fiction books and sheep-related gifts may be requested at www.marlenembell.com or www.texassheep.com.

Marlene and her husband, Gregg reside on a wooded ranch in East Texas with their 50 head of Horned Dorset sheep, a lovable Maremma guard dog named, Tia, and 3 spoiled cats who rule the household.

Win 2 autographed paperbacks of Stolen Obsession and a $50 Amazon Gift Card for each winner! a Rafflecopter giveaway
Posted by Andi at 3:30 PM