Review of No Angels for Christmas by Petie McCarty

Welcome to the review tour for No Angels for Christmas by Petie McCarty! This story is one that is going to capture all of your emotions along the ride. Please enjoy my review and then follow the tour to read what other people have to say. You can also leave questions and comments for the author along the way, which gives you bonus chances to enter the great giveaway! 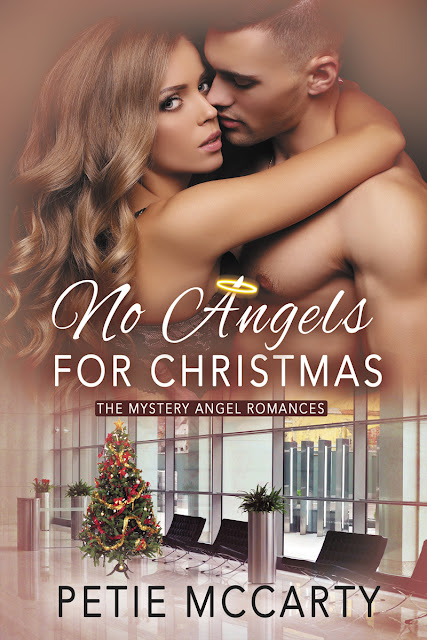 No Angels for Christmas

No Angels for Christmas . . . a cozy romantic mystery with suspense from The Mystery Angel Romances series. An angel hidden in every book waiting for you to figure who . . .

Child psychologist Rachel Kelly isn't quite sure how to handle the situation with her newest client -- a six-year-old boy who says he can talk to angels and one is coming to help Rachel. She already has her hands full of trouble this Christmas season, and things quickly take a turn for the worse when a stalker crashes Rachel's Christmas party and takes her young clients hostage.

Police negotiator, Lt. Jake Dillon, walked away from his fiancée Rachel when she suddenly balked at having kids. His kids. Yet when the hostage crisis erupts, Rachel calls Jake first. Now he has a choice to make -- stand back and wait for the cavalry to save Rachel or step in and try to save her himself. Time is running out, and Jake may be their only chance for rescue.

Unless Rachel's little angel-spying client is telling the truth…

Jake whipped his BMW into the Azalea Center parking lot and switched off his headlights in one smooth motion. Guided by the light from the few streetlamps, he coasted to a silent stop next to Wally’s Jeep, though his emotions had urged him to come screeching around the corner like the cavalry. Common sense and the need for stealth won out. He couldn’t risk driving the trespasser underground only to have him surface later after Jake had gone.

Clicking off his interior lights, he drew his Sig Sauer from the glove compartment, then climbed out and pushed the car door in until the latch quietly held. He waited several seconds to let his eyes and ears take in the entire scene. Damn. All the landscaping crowded around the Center provided a multitude of places for a trespasser to hide.

He put a hand on the hood of Wally’s Jeep. Still warm, even in the cold night air. A brief stab of guilt hit him for dumping his team so abruptly in the Beef n’ Barrel. Couldn’t be helped.

He scanned the closest landscape beds for some sign of Wally. A stiff north breeze whipped across the parking area, stirring up leaves and debris. Barely visible through the treetops, the almost-full moon blazed bright.

He made his way past the large perimeter oaks to the interior sidewalk and began a slow circle of the building, checking sections of garden as he paced. All the offices on the west side of the building were unoccupied, and all windows were dark, a few with vestiges of their interior visible due to adjacent emergency lighting.

Rachel’s office just around the corner faced the back of the property. At this time of night, her office interior would be entirely visible with her lights on. Jake knew this because he’d snuck over here enough times in the last few months to observe her office from the garden. He was pathetic and every few weeks had needed a glimpse of her to get by. A wry smile twitched the edges of his mouth. He could’ve been called in as a trespasser on any one of those nights should someone have spotted him and cared enough to make the call.

Careful to remain off the sidewalk, he silently paced toward the back garden. If the trespasser was a stalker, then the perp probably knew the Center had no security guard and no security system. A fact that had always bothered Jake.

At the back corner of the property, he crossed the sidewalk to inspect the landscape areas adjacent to the building. With quick steps, he shifted from one landscape bed to another. Crouching as he left the larger camellias, he moved through the shorter azaleas and Indian hawthorn.

Clearing the corner, his position even with the back of the building, he paused to reconnoiter and stared at the faint pool of light cast by an overhead office. Rachel’s office.

As his gaze rose to the second-floor office, his eyes searched for the all-too-familiar figure. Without thinking, he straightened to his full height, clearly visible to anyone glancing out the window. Yet no one searched for a figure in the garden. All eyes in the office were busy.

Rachel stood with Olivia and her children on one side of the conference room. On the other side of the room, a man in a worn red jacket and baseball cap faced them—pointing a gun.

This was Jake’s horrible nightmare.

Yes, this is my affiliate link. Should you make a purchase through it, I can earn a few pennies at no additional cost to you. Thank you for supporting my websites!

**My thoughts**
Wow, this book was a lot more intense than I thought it was going to be! You have a lot of elements working together here. You have a broken relationship, sick children, abused children, the child who sees angels, and then a bit of suspense when Rachel and the kids are kidnapped. My heart truly hurt for these kids, and for Rachel who is trying to face life after some devastating news. I honestly kept a Kleenex nearby, because tears had a tendency to surface in many places.

And then there is also the element of keeping the faith in life. Some characters are strong in their faith. Some are struggling. Some are finding it. But the most magical part of all is knowing there are angels among us.

This is not going to be one of your quick reads that you can easily breeze through. It definitely held my attention, but required a lot more digestion than a lot of romances and stories I have been reading as of late. The premise is an interesting one, and I may have to check out the other books in the series.


Petie spent a large part of her career working at Walt Disney World—"The Most Magical Place on Earth"—where she enjoyed working in the land of fairy tales by day and creating her own romantic fairy tales by night, including her new series, The Cinderella Romances. She eventually said good-bye to her "day" job to write her stories full-time. These days Petie spends her time writing sequels to her regency time-travel series, Lords in Time, and her cozy-mystery-with-romantic-suspense series, the Mystery Angel Romances.

Petie shares her home on the Cumberland Plateau in Tennessee with her horticulturist husband and a noisy Nanday conure named Sassy who made a cameo appearance in No Angels for Christmas.

Petie McCarty will be awarding a $10 Amazon/BN GC and 3 ebook copies of Duke Du Jour, book 1 of the Lords in Time series to 4 randomly drawn winners (one prize per winner) via rafflecopter during the tour.