Review of Threads by Charlotte Whitney

I'm not usually a fan of historical fiction, but I was drawn to this novel and had to read it. Why? I explain more in my book review. You'll also get to read an excerpt, plus an interview between the youngest narrator, Nellie, and author Charlotte. Let Charlotte know what you think in the comments section as you follow the tour for more. And best of luck entering the giveaway! 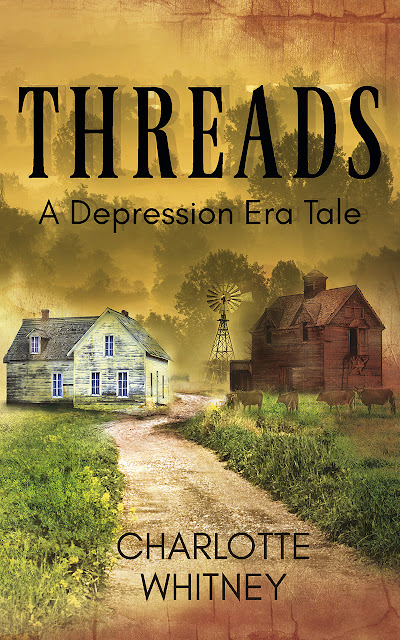 It's a boring, hardscrabble life for three sisters growing up on a Michigan farm during the throes of the Great Depression. But when young Nellie, digging for pirate treasure, discovers the tiny hand of a dead baby, rumors begin to fly. Narrated by Nellie and her two older sisters, the story follows the girls as they encounter a patchwork of threatening circumstances and decide to solve the mystery.

When I got home from high school today, Jeepers, I knew immediately that something wasn’t right. Aunt Hazel and Ma were sitting out by the milk house on a couple of turned-over pails, and Irene and Nellie were sitting on the ground close by. All of them were looking towards the lane that goes down to the two meadows and onto the woods and crick. The county sheriff’s car sat empty near the silo. No one was talking.

Worried, I raced across the yard. Could Pa have gotten hurt? As I ran toward Ma I looked over at the west field and saw Ace and King hitched up to the wagon piled with brush. Rover was sleeping near the wagon.

It looked like Pa had finished about half of the field, but he was nowhere in sight. Pa never leaves the horses hitched up when he isn’t working. When he comes up for noontime dinner he always puts them in the barnyard so they can rest, too. Naturally, I panicked.

When Ma saw me running over she jumped up and walked over to me, a strange look on her face.

“Yes, yes,” Ma answered. “He and Elmer are down in the woods with Sheriff Devlon.” Nellie pushed me aside and threw her arms around Ma’s legs.

“Nellie thinks there’s a dead baby in the woods,” Irene piped up, all knowingly. “The Sheriff’s gone with them to look at it. Who in their right mind would bury a baby in that woods? Nellie musta gotten it all mixed up.”

I don't usually read historical fiction. But I was drawn to this book. My mother grew up on a farm in Michigan, actually not dreadfully far from where this story takes place. She was born a few years after this story takes place, so a lot of the activities that the girls describe sound familiar to me after listening to her stories. She even attended a one-room schoolhouse until she went to high school. I still go back to visit that family farm on occasion, as I still have family there, and I felt like I could picture a lot happening right there.

My paternal grandmother was actually in a suburb of Toledo, mentioned a few times in the story. (For those who don't know, Toledo sits in Ohio on the Michigan-Ohio line.) And while she was in a merchant family and not a farm, she often told me many stories about the Great Depression. So I ended up having a bit of a familial connection to this story. (Plus there are some familiar situations in the epilogue.)

The author specifically mentions trying to keep true to the vernacular of the Michigan farmer. Each of the girls telling the story has her own cadence and vocabulary, and yet again, that is all familiar, down to both of my parents talking about playing in the crick when they were kids.

Now, we didn't have any family lore about the body of an infant being discovered in the woods near the farm. This story revolves around young Nellie's discovery and the fallout and mystery surrounding the baby's identity. In fact, the young girls form a special Sisters Club where they regularly meet and discuss the results of any sleuthing that they have done.

At first, it could seem tedious to have the different parts of the story told three times in three different ways. But that's a important part of the story itself. Each of the girls has a different interpretation of everything that unfolds in the story. My sister and I often talk about how interesting it is that the two of us had the same upbringing and yet interpret our shared memories differently. That's a huge part of what is going on here. And the only way to put together a clearer picture is to fit together these three pieces.

It's also a great historical lesson about how tough times were during the Great Depression. This story felt more real to me than a lot of other stories I have read from this time period.

I really enjoyed this story and unexpected connection to my past. The slow rolling mystery and farm life just fascinated me. Thank you to the author and Goddess Fish Promotions for providing me with a requested review copy. All thoughts and opinions are my own.

Howdy do, I’m Nellie, the youngest girl in Ms. Charlotte’s book THREADS. Today I’m gonna be interviewing her about her writing and why she created me in that book. First, a little ‘bout me. I’m seven-years-old and it’s 1934 and I live with Ma and Pa, my sister Flora (17) and my sister Irene (11) on a farm near Marshall, in a place called Michigan. We’re having “hard times” and I’ve never had a new dress; I always wear hand-me-downs. I go barefoot all summer and most of the time I love it unless I step on a frog or into a cow pie.


Q. So Ms. Charlotte, was it difficult figuring out me as a character?

A. No, it wasn’t difficult at all. You were the first of all the characters that I sketched out. But originally you were only four, not seven. I had wanted you to be a precocious child with a wild imagination, and so young you hadn’t been exposed to school or much life at all beyond the farm. I wanted a tender, unsocialized girl, cuter than all get out, who was also smart as a whip. So I wrote the whole first draft with you at age four.


Q. Why did you make me older?

A. That happened when I realized that you as a four-year-old focused on too much fantasy for the adult historical novel that I wanted to create. The younger you flew around with ZeeZee, a boy from outer space in an old school bus that your uncle had given Pa. You had a bunch of adventures and one day ZeeZee was careless and hit an old Model T with young people in it. One of them was killed. While all of this made for an interesting adventure, it didn’t move the mystery ahead, and it created a lot of dissonance in the book. It was okay for you to have imaginary friends but I had written scenes that would have worked much better in a children’s story book. So I kept the creative, imaginative part of you, but made you older with more logical abilities. You still saw dancers in the sky, and talked to ZeeZee and your Pottawatomi Indian friends, and had conversations with farm animals, but you also became part of the Sisters’ Club, attempting to unravel the mystery of the dead baby you discovered in the back woods.


Q. Tell me about how you created my parents, Ma and Pa.

A. It was 1934 during the height of the Great Depression and many farmers were losing their farms. No one know if and when the economy would get better, so I knew that Ma and Pa had to be hard-working, self-sacrificing, and dedicated to raising morally upright daughters. I also wanted them to have a strong religious faith, and impart that to you and your sisters. However, I didn’t want them to be unidimensional, so I added several quirks to your mother’s personality. First, because she lost her own mother at an early age, she didn’t quite have parenting down pat. She was superstitious and wouldn’t allow thirteen at a dinner table (one of my own grandmother’s superstitions). She was scared of Gypsies and worried that they stole children, and she thought that rumors should not be confronted—that they simply would go away. That didn’t work so well when you sister Flora was rumored to be the mother of the dead baby you discovered. You girls decided to take steps to figure out the mystery and clear your sister’s name.


Q. What part of the adventures did you enjoy most after you’d written it?

A. Well, I loved the barn fire scene. I rewrote that a few times. I also loved the scene where the train riders came and helped your sister Irene catch the food thief. I was so happy that Ma and Pa invited the train riders for Sunday dinner and shared stories under the shade of the maple tree after dinner. The scene where Irene sneaks away to the Camp Meeting is another one I enjoyed.


Q. Why did you write an Epilogue forty years later?

A. All three of you girls were so interesting in totally different ways. I wanted to depict how some elements of your personalities carried through to adult life. I also wanted to include some surprise twists. Just as in real life, events don’t always turn out like you expect. I’ll leave it at that, as I don’t want to include any spoilers.


Q. Was I your favorite character? Please, please say yes.

A. Of course you were, Nellie. Just don’t tell your sisters. It’s our secret.

Charlotte Whitney grew up in Michigan and spent much of her career at the University of Michigan directing internship and living-learning programs. She started out writing non-fiction while at the University and switched to romance with I DREAM IN WHITE. A passion for history inspired her to write THREADS A Depression Era Tale chronicling the stories of three sisters on a farm during the throes of the Great Depression. She lives in Arizona, where she loves hiking, bicycling, swimming, and practicing yoga.

Twitter
https://twitter.com/CWhitneyAuthor
Charlotte Whitney will be awarding a $50 Amazon or Barnes and Noble GC to a randomly drawn winner via rafflecopter during the tour.
a Rafflecopter giveaway
Posted by Andi at 3:00 AM