Welcome to the blurb blitz tour for Halfbreed Warrior by Bobbi Smith! If you're a fan of historical romance, check out this excerpt and then follow the tour for even more. Make sure you leave questions and comments along the way. Best of luck entering the giveaway! 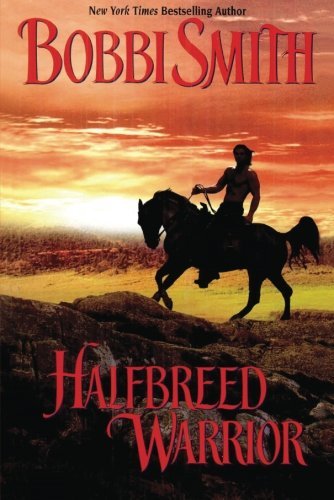 The Legend of The Hawk

With Comanche blood flowing through his veins, Hawk always knew he was different. Everywhere he went, people scorned him, feared him, hated him - and he expected the same when he hired on at the Lazy S Ranch to help catch rustlers. What he didn’t expect was a woman like Randi. Her impulsive spirit and generous heart broke through his reserve and made him want to love again. But he couldn’t afford to get close to anyone. Not with the job he had to do.

The Will of the Lady

Randi Stockton grew up around rough cowboys on her father’s ranch. None had managed to win her love…until the mysterious stranger with the power to tame the legendary wild horse strode into her life. Randi knew he was a half-breed, but something about him called to her. And he was the only one who could save her from the traitor at the Lazy S. The danger lurking in the shadows and canyons threatened to draw the two apart, but Randi knew in her heart that Hawk would always be her Half-Breed Warrior.
Read an excerpt:

Jack and Hawk were riding slightly ahead of Randi as they headed out to track down the rustlers. Hawk was alert and on edge as they rode toward the entrance to Black Canyon. He didn’t know why, but for some reason he felt uneasy this morning. He’d learned early in life to trust his instincts, and he took care to study the surrounding hillsides. He looked for any sign of trouble as they rode father down the trail.

“Randi,” Hawk began as he glanced back her way, wanting to tell her to keep up with them.

It was then, out of the corner of his eye, that he caught sight of the glint of sunlight off metal, high on the hill behind them. He knew what it meant.

Fred took careful aim. His mood was deadly. Just as he started to pull the trigger, he heard Hawk shout. He began to fire.

The first shot hit Jack in the chest. He cried out and fell from his horse, laying unmoving, face down on the ground.

“Randi! Get out of here now!” Hawk ordered, drawing his gun to return fire.

Randi went for her gun, too, as she spurred her horse on. Hawk rode after her, looking for cover, but there was none. They were trapped. Whoever had planned this ambush had known exactly what he was doing.

“Ride for the passage!” Hawk shouted to her, knowing it was their only hope of escape.

Fred was not about to let them get away. He got Hawk in his sights, and fired. He smiled in satisfaction as his bullet found its mark. Hawk was knocked from his horse.

“Hawk!” Randi cried out as she saw him fall.

Hawk lay still on the ground. Blood from a head wound covered his face.

http://www.Bobbismithauthor.com
Bobbi Smith will be awarding a $10 Amazon or B/N GC to a randomly drawn winner via rafflecopter during the tour.
a Rafflecopter giveaway
Posted by Andi at 3:30 AM
Labels: book excerpt, book promo, giveaway, Goddess Fish, historical fiction, historical romance