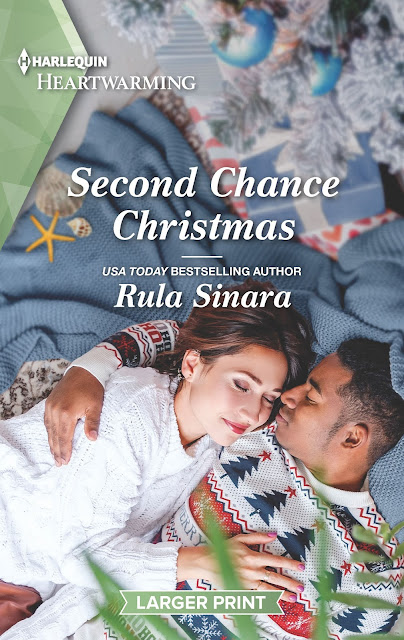 A second chance. That’s what former navy SEAL Damon Woods asks for when Zuri Habib comes to Turtleback Beach with a nephew who looks just like him. After her sister’s death, Zuri believes Caden deserves to know his father—even if he did break her teenage heart. Can Damon and Zuri forgive each other and give a grieving boy the family he needs this Christmas?

Book Links:
Goodreads │ Amazon │ B&N │ Target │ Kobo │ BookBub
(affiliate links included above)
**My thoughts**
I've read a few of Rula Sinara's books, though this was my first in this series. This one was just as enjoyable as those, and I'm going to have to catch up on this series! This book definitely worked as a standalone.
Zuri had a big crush on Damon when they were kids. But he only had eyes for her sister at the time. Now Zuri's sister has passed away, leaving behind her son Caden, the 12-year-old son that Damon never knew he had. Caden's only wish, other than his mom's cancer going away, was to know who his father was. Now that Zuri is raising her nephew, she wants to honor that request, even though it means reopening the wounds caused by her old friend.
12 years does a lot to people. Zuri has used her intellect to propel herself upwards in her field of environmental research. She has become more comfortable in her own skin. And raising her nephew has also made her a fierce protector.
Damon had become a Navy SEAL and now trains people and dogs in water rescue. It's especially a passion of his since he lost his younger brother in a drowning accident. And now he's wrestling with finding out that he is a father and that his former love has passed on.
All three of them are raw from their losses and trying to figure out how to navigate uncharted waters. They all see forgiveness and are wary of trusting again after the perceived betrayal in those losses.
Now they're all learning how to live with these newly defined relationships in their inside-out worlds. Damon and Zuri especially need to learn how to deal with past feelings and how to maneuver the new dynamics with Caden.
Another important character is Damon's dog named Duck, who is part of his rescue team. Caden takes to Duck like a duck takes to water. [Sorry, I couldn't resist the pun.] Zuri isn't too sure about dogs. But it's amazing what dogs and children can do to alter the trajectory of a friendship.
Their journey is not an easy one. There are a lot of wounds that need to heal for them and their respective families. But you're going to root for them to do it.
Bonus points for the author addressing bias based on sex and race and for the characters working to overcome this.
I received a requested review copy from Prism Book Tours. All thoughts and opinions are my own.
Posted by Andi at 5:52 PM