Are you a movie junkie? I subscribe to a ton of streaming services and still have a huge DVD collection. I love watching movies and I love movie trivia. I also get a kick out of finding mistakes in them. IMDB is my friend. But now this book will have to go into the mix! It's all about movie mistakes from our favorite films. Read an excerpt from Reel to Reel by Isla Grey and then follow the tour for more! Remember to leave questions and comments along the way. Best of luck in the giveaway! 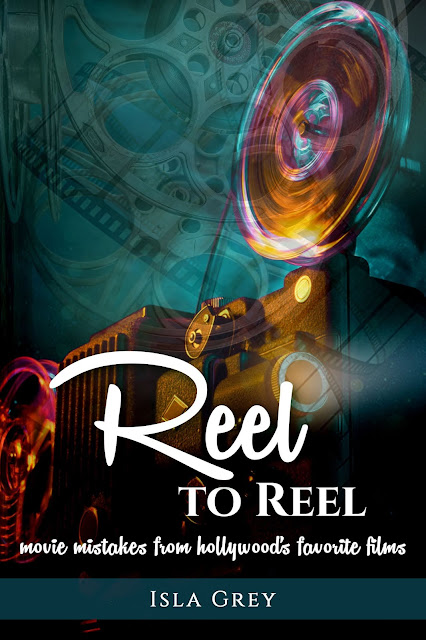 Lights, Camera, Action! From the very beginning, the world of cinema has captivated us. We have found ourselves laughing at our favorite comedies, crying when love finally comes to fruition, being beamed to other worlds or battling in the midst of action sequences. While movies might be the perfect entertainment, most have slight imperfections, mistakes, which go unseen, until they’re released and caught by the movie audience. These mistakes don’t detract from the film, and finding them are just as fun as watching the movie. For the past several years, Isla Grey has written a “Movie Mistakes” column for Bellaonline. “Reel to Reel” is a collection of some of those columns, spotlighting the fun goofs found in some of our favorite movies. Can you spot them? Grab the popcorn, sit back, and happy movie watching!
Read an excerpt:

There’s no question--Noah and Allie are in love. Set in two different time periods, the beginning of the pair’s relationship is shown via a notebook an older Noah reads to Allie who is suffering the effects of dementia. Can true love ever be forgotten? Here are a few movie mistakes to look for while watching “The Notebook”.

Near the beginning of the movie, the younger Allie and Noah are at a carnival. After their first encounter, Allie and another man get on the Ferris wheel. The man is holding cotton candy in his right hand. This is noticeable throughout the scene. After Noah has climbed aboard and gets Allie to go out with him, the cotton candy the man was holding is now gone.

After Noah and Allie have watched the movie in the theater, they decide to go for a walk. When they get to the traffic light, Noah tells her how he used to lie in the road and demonstrates for her. At first, Noah is closer to the center of the lane to his left. (This is noticeable in the overhead view.) During the close-up, Noah is now closer to the double lines that run down the middle of the road. This happens again when Allie joins him. At first, they are closer to the center of the lane to their left, but the next view shows them near the double lines.

Isla Grey is from Central Virginia and at an early age developed a love of movies. She shared many Sunday afternoons watching old favorites with her grandmother that included everything from “Gone with the Wind” and “Rio Bravo” to “Titanic” and “The Mummy”. (Her grandmother may or may not have made fun of her when she covered her eyes during “Anaconda”.)

Working as Bellaonline’s Movie Mistakes editor since 2012 has given Isla the opportunity to indulge in two of her passions—movies and writing.

When Isla isn’t writing or watching movies, most of her time is spent with her ever active daughter and her band of cats. She also enjoys good music, reading biographies and ghost stories and taking quiet strolls.


Isla Grey will be awarding a $25 Amazon or B/N GC to a randomly drawn winner via rafflecopter during the tour.
a Rafflecopter giveaway
Posted by Andi at 3:00 AM