Review of Stalling for Time (Kiss & Tell #1) by Christy Hayes 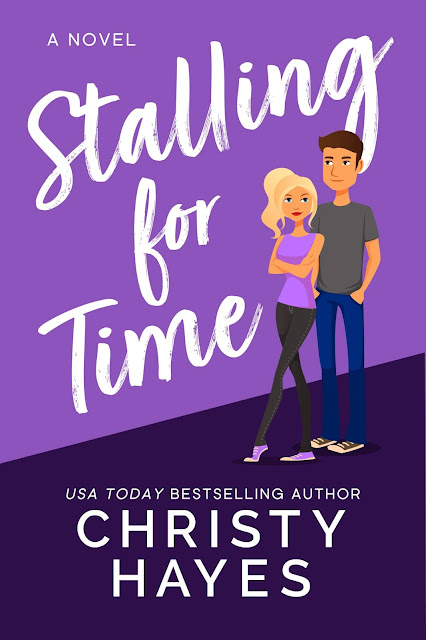 Stalling for Time
(Kiss & Tell #1)
By Christy Hayes
What’s a girl to do when her best friend is making a huge mistake?

College sophomore Emily Dilbert has been best friends with Dylan Chamberlain since the second grade. When she finds an engagement ring in Dylan’s backpack, she panics and vows to do whatever it takes to stop him from marrying a girl he barely knows.

Dylan Chamberlain has been in love with his brother’s girlfriend, Emily, since they were kids. When his brother asks for help planning a surprise proposal, Dylan knows it’s time to bury his feelings and finally let Emily go. If only his heart would cooperate.

After her roommates fail to lure Dylan away from his girlfriend, Emily is forced to confront him directly. When she accidentally puts them in a compromising position, will Dylan reveal his long-buried feelings, or will Emily realize she’s dating the wrong brother?

Book Links:
Goodreads │ Amazon │ Barnes & Noble │ Kobo │ GooglePlay │ Smashwords
**My thoughts**
Emily and Zach have been together for five years, since they were in high school. He is two years older and a star college football player. Their relationship revolves around his devotion to the game and not as much on them as a couple. It's just the way it has always been. Zach takes Emily for granted. And she is slowly starting to realize this is not what she wants.
Dylan is Zach's younger brother and Emily's best friend. Now, why no one has acknowledged that this should be a red flag is somewhat beyond me. Then again, they had all known each other from childhood, so that may have been blurred somewhat.
Only Dylan has been in love with Emily for years. And he's crushed when Zach confesses that he's going to propose after the football season is over and asks Dylan to hide the ring for him.
And then it complicates even more when Emily accidentally finds the ring and assumes Dylan is proposing to his new girlfriend, whom he hasn't been with that long. She becomes absolutely irrational over it all, completely oblivious to the fact that she is absolutely in love with Dylan. She concocts this crazy scheme with her roommates to find out the truth about Dylan's supposed impending engagement, instead of coming right out and asking her best friend the truth. I give props to her roommates for calling her out on being childish. I also appreciate how while they pretend to go along with the scheme, they are actually setting up everyone for the truth to come out so that they can all move on.
It's the first time that I have ever spend so much of a book rooting for a breakup in the leading couple. But you know that they aren't good together and could learn a lot after the fact. Zach can learn to better manage his priorities. Emily can definitely mature. They were young with they first got together all of those years ago.
And you want each of them to find happiness. For Emily, you know it will be Dylan. She needs to be with her best friend. For Zach, we'll have to read the second book to find out how he fares.
And though the brothers have gotten themselves into a debacle that could rival Bobby and JR Ewing,  you hope that they can eventually get past it and try to repair their once close relationship.
In spite of my annoyance with the characters, I still enjoyed this book and devoured it in one sitting over the weekend. I'm eager to read the next book in the series to see what comes next.
Thank you to the author and Prism Book Tours for providing me with a requested copy. All thoughts and opinions are my own.
Posted by Andi at 12:10 PM
Labels: book review, clean romance, contemporary romance, Prism Book Tours