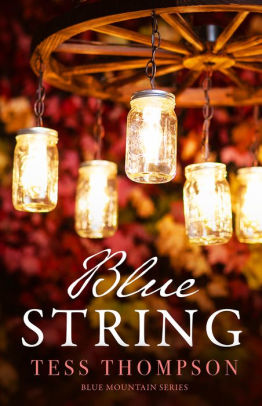 Costume designer Teagan Lanigan only has time to love her work and the young son she’s raising by herself. But when she decides to give up the glitz and glam of the film industry for a quiet life near her family, she’ll face two unique challenges: reconciling with her estranged mother, and trying to forget her fling with a very famous country music star.

Yet when Wyatt Black suddenly appears on Teagan’s porch, forgetting him is no longer an option. The man who wooed her with sensuality and song is just a shell of himself. Fragile and depressed, he’s carrying the weight of the world on his broad shoulders, and Teagan can’t turn him away. But when the pair find themselves in the middle of a murder investigation, it will be more than just Wyatt’s troubles and the duo’s lingering feelings for each other that leave them tied up in knots.

In the fourth installment of USA Today bestselling author Tess Thompson’s Blue Mountain Series, fall in love with the thrills of a genuine small town mystery and the heartwarming redemption that can only be found in the eyes of true love.
Book Links
Goodreads * Amazon * BN * Google * iBooks * Kobo
**My thoughts**
Ah, finally we get to enjoy Teagan Lanigan, the only daughter of the original clan. We know that she'd had a big fight with her father before he died over her having a son with a mystery man whose identity she still withheld. She also had a very rocky relationship with her mother. Her fiery Irish temper matches her ginger locks and keeps her quite stubborn and determined.
But now she has come home from her design work in Hollywood to try to give her son some semblance of a normal childhood and to hopefully make some of the same wonderful memories that she has from her own childhood on this land.
When her birthday rolls around, she gets a surprise visit from her old flame, country music star Wyatt Black. The two of them had enjoyed a pretty intense relationship between the sheets. But they had also fallen for each other and didn't quite realize it.
One of Wyatt's concerts had been interrupted by a crazed gunman opening fire on the crowd. [You may remember this from one of Tess's other books, Missed, from the Cliffside Bay series.] Since then, he has been struggling to heal and can only think about Teagan. So he has come to see her and to hopefully win her heart as he heals his own and tries to regain his musical muse.
Teagan's concerns are that she doesn't want her heart broken if she allows herself to fully open it up to Wyatt. She is also concerned about letting her young son Chris get too attached. He needs a father, but doesn't deserve a heartbreak.
Wyatt is determined to prove himself to Teagan, but then a couple of murders happen and everyone becomes a suspect. They find themselves involved trying to solve the murders as they also try to discover if they can really make it work.
Wyatt is going to steal your heart as he tries to soften Teagan and finds himself hopelessly attached to Chris as well. Teagan is going to work on really valuing her whole family, beyond just her son. I'm so glad we finally get to know her.
It's another great visit with some familiar friends, and meeting some new ones, in Peregrine, Idaho.
Posted by Andi at 8:41 PM
Labels: book review, contemporary romance