Read an exclusive excerpt from Sorcerers Reborn: Earth by Richard B.

Read an exclusive excerpt from the first installment of a new fantasy series from Richard B, Sorcerer's Reborn: Earth. Be sure to follow the tour for even more and then download your own copy. Best of luck in the giveaway! 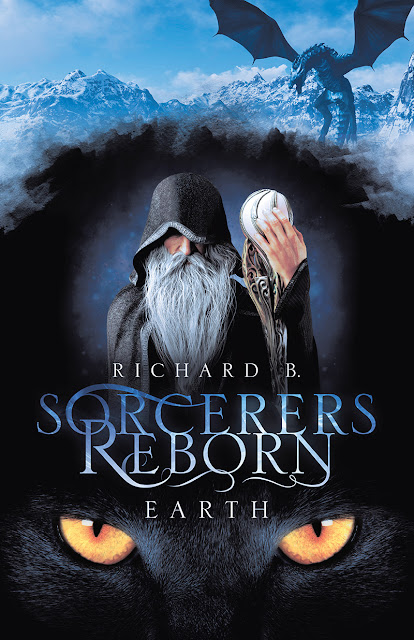 Sorcerers Reborn is Book One in a series that begins here on Earth and takes you on a new and exciting journey in the world of Sorcerers, Dragons, Elves and more.

Midnight stops. She feels something she hasn’t felt in three thousand years, something that possesses magic. It’s to the east in the mountains. She runs toward the beacon. She stands in front of a sheer stone wall hundreds of feet tall. There is a cave three quarters of the way up where the magic resides. If she tries to reach whatever is up there, it could potentially kill her. She’s come this far, but her journey isn’t over yet.

Midnight was exiled to earth with six Sorcerers by the evil Sorcerer Tay’Ron. She is a creature of magic, created by magic. She holds the gift of Sorcery from six Sorcerers who have passed on, and she is on a mission to find people on earth who are worthy of possessing this power. Her legacy must continue. Time is of the essence.

She possesses the gift of Sorcery. Midnight is a creature derived from magic, a fairy creature created from magic. She is not a Sorcerer. The six other Sorcerers are the six she carries inside of herself.

On the seventh heclena General Holten sent for them. “I have summoned you here to ask you to lead a strike force into the palace. Six aqueducts run under the city taking waste to the ocean. One of these will take you into the palace. All of you have been active in our fight against the invaders and I believe you are our best choice. Bella, you spent several years in the palace, so you know the layout better than most. The way in is not an easy one; however, it can be done with the right people—and I believe you are our best choice. Will you volunteer to take this task on?"

Bella looked at Holten. “Can we discuss this among ourselves before we commit to your plan, Sir?”

“You have one hecna Lady Bella, we must begin our assault today.”

Bella asked her cohorts if they were up to the incursion into the palace. The decision was unanimous. One hundred soldiers, led by Commander Doren, were also in the party. They looked at maps and diagrams that showed where the underground aqueducts were and how to access them from above and came up with a plan. The company rappelled down the slope to the discharge end of the aqueduct. Once inside they found walkways on either side of the channel and lights on one side made it easier to navigate than expected.

Commander Doren walked beside Bella and finalized the details of their raid. “We do not know what we will find in there. If our suspicions are correct, we may be looking at a battle that some of us will not come back from. A two-pronged attack—you take fifty soldiers and I take the rest.”

“We know the risks involved Commander. Can you and your men use telepathy to communicate?” Bella asked him.

“Some of us can. I suppose shouting would not be to our benefit would it?”

Bella took Tara, Jacky, Cecil, and Bart with her while the other four Sorcerers went with Commander Doren. They reached the points where they would ascend into the palace. Bella gave the word and both parties climbed the stairs. Bella come out in the kitchen. One of the soldiers moved ahead checking for kitchen staff, but no one was there. So far so good, Bella thought. There was a service stairway in the kitchen that would take them to every floor of the palace. They climbed the stairs to the floor that housed the king’s private rooms. That is when everything went south.

A dozen soldiers guarded King Arin’s chambers and the first battle began. The soldiers guarding the hallway were not Geldanian, they were from the southern continent. The fight in the hall was short, but they had more soldiers and two southern Sorcerers to deal with once they entered the main room. Jacky fought her way to the king’s bed chamber and, throwing her knife at the Sorcerer guarding the door, was able to gain access to the room.

Rick (Richard B.) Ogle was born in 1951 in Northern Ontario. This is his first appearance in the writing world. He worked for forty-five plus years as a journeyman fabricator/welder. In 1978 Rick wrote a short story titled "Storms" that turned into two books. His work always came first, so writing took the back burner. Writing of Sorcerers Reborn began in late 2000, but again work came first, so the book was not revisited until he was force into retirement in 2013.

In 1998 Rick went back to school to learn something that would get him out of his chosen trade as a fabricator/welder. In 1999 he spent six months as an adult literacy tutor and found that was rewarding when he saw the progress each student was making. He currently holds an Adult Instructors Diploma. He completed a six-month course to obtain an A+ computer technicians' certification. He has an AutoCAD certificate in drafting and design. He instructed classes for Microsoft Word, Excel, PowerPoint, and Access at the North Cariboo Community Skills Center in Quesnel BC.

Rick is self-taught in HTML (Hyper Text Markup Language) code and built his website in 1998 while he was in school. He named his website "Poems and Short Stories by Richard B". That website is still going today. Home page URL: http://www.richardbees.ca

CONNECT WITH RICHARD B.

GOODREADS: https://www.goodreads.com/author/show/5255029.Richard_B_
Richard B. will be awarding a $20 Amazon or B/N GC to a randomly drawn winner via rafflecopter during the tour.
a Rafflecopter giveaway
Posted by Andi at 3:00 AM