A little bit of faith and morality with a lot of fantasy. Enjoy this excerpt from DutyBound by Mark A. Alvarez II before you download your copy. And then follow the rest of the tour for even more. Best of luck entering the giveaway! 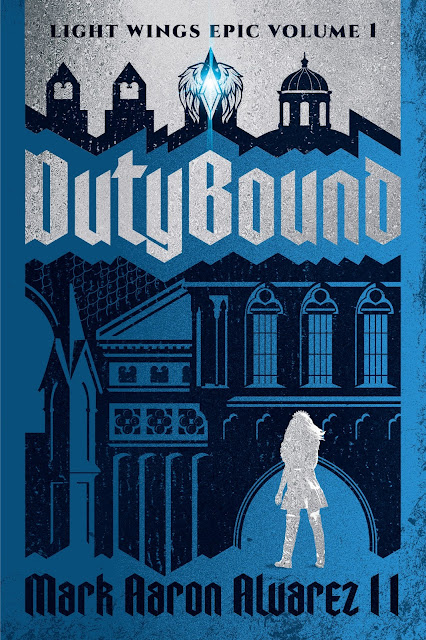 The world was their creation until they sought to destroy it.

Dutybound is the story of Terestria and its Virtues, heirs of nobility forced to face the Sins of their forefathers and bring their world from the brink of Darkness. Among them is Lucia Sanoon, High Maiden to the province of Moz and chosen of the Light Wings. The ancient relic, bestowed upon a long-forgotten civilization by the Light itself, was forged to harbor the Light's essence if ever Terestria's balance were threatened by the Darkness' desire to corrupt the Light's most-prized creation, Life. If successful and the long-standing covenant between the Light and its Protectors were ever to be broken, the Darkness would be free to roam Terestria and reclaim the land it had a hand in creating, bringing death and destruction to every corner of the world.

But as long as there is Light, there is hope. With the help of the Light Wings and its power, Lucia must heed its call to assemble the Light's Virtues and lead them into battle against the very Sins that seek to destroy their world. But finding the four will not be easy, for much of the knowledge is lost and the understanding of one's own morality is the only key to unlocking the power each of them holds within.

A story of faith and morality, Dutybound will lead you through a journey of self-discovery as our heroes face conflict from outside and within themselves. Duty, desire, envy, hope, hate, love, pride, and temperance all are challenged within this series in an epic tale that is sure to have you pondering your own true nature.

Today was a day of tragedy, although most did not know it. It was a dark, cloudless night. Not one sound broke throughout the grand-white city of Moz, sparkling like a diamond within the valley of a vast mountain range. Not a single ray of light could shed an ounce of joy upon the city, for it was already condemned by the haze that shrouded it. The mist hovered in the silence of the night, stagnant with the suffering of the land that lay below it. All the while, the people of Moz rested, unaware that all they held most dear teetered on the brink of ruin.

“Oh.” Ara sighed as she sat alone in a muddled study. Her face flushed as her eyes scanned over a piece of parchment at the base of a broad window. Her irises, like embers, were so round and passionate, glistening almost red as she eagerly inspected the letter her beloved had left her. But in that moment, as she realized what had happened, her eyes began to quiver, becoming trapped within garnet walls of fear. After everything they had faced, Stello had abandoned her, leaving their family broken.

Buy on Amazon
(affiliate link)
About the author:

Mark A. Alvarez II is a Hispanic-American born in Houston, Texas. He’s a graduate of Texas State University, where he studied public relations and mass communication. He was an apprentice at the NEW Apprenticeship where he was certified in digital marketing. He is the CEO of Light Wings Promotions LLC, a digital marketing and creative branding agency in San Antonio, Texas, where Mark currently resides.

Mark Aaron Alvarez II will be awarding a $15 Amazon or B/N GC to a randomly drawn winner via rafflecopter during the tour.
a Rafflecopter giveaway
Posted by Andi at 3:30 AM
Labels: book excerpt, book promo, fantasy, giveaway, Goddess Fish