The Romanov Legacy by Marilyn Baron

The mystery of the Romanov family is still a favorite today. Author Marilyn Baron imagines a life for a descendant of the family and a New Russia in her thriller, The Romanov Legacy. Enjoy an excerpt and then follow the tour for more. Be sure to download a copy! And best of luck in the giveaway. 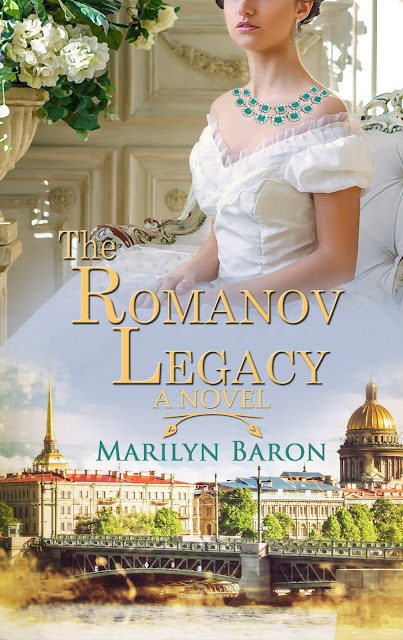 Two women, centuries apart, and the secrets that bind them

Melody, a young single mother, discovers she’s descended from the last Tsar, Nicholas II. She becomes the best hope of a secret global society, Guardians of the Romanov Legacy, dedicated to restoring a Romanov to the throne of a New Russia. A diary and an heirloom necklace inherited from her murdered grandmother hold the key to her identity and to the location of the Tsar’s lost shipment of gold.

She must accept the sacrifices her birth demands and trust the machinations of the estranged father of her child. To refuse means turning her back on her heritage, her daughter’s legacy, and the long line of her family’s women who were keepers of the secret. Will her longing for true love have world-changing consequences?
Read an excerpt:

A tiny tear slipped down her cheek. But that was as far as she would display her emotions. She held her head up regally. After all, she was an Empress. She was determined to die with dignity. She wondered if Marie Antoinette had held her head high before it was unceremoniously severed and dropped into a basket.

“There won’t be a last-minute reprieve if that’s what you’re thinking,” warned Miss Cormier.

Would they actually go through with it? Would they really execute her in cold blood like they did the Tsar and his family? She was terrified they would. She could hear the sound of her heartbeat amplified. She was having a full-blown panic attack. She couldn’t breathe. She feared she would die of fright before they had the chance to cut her down in a hail of bullets.

Miss Cormier lifted her hand to give the command. Hatred flared in her eyes. What had she done to deserve the woman’s anger? Fallen in love? Then the guards raised their rifles in unison to open fire. She closed her eyes tightly so they couldn’t see the hope fade from her face. She couldn’t bear to confront her own mortality. She held her breath.

Then she heard the bullets ping. Where was she hit? How long would it take to die? She hoped it would be over soon. She sagged in her chair, mercifully blacking out. 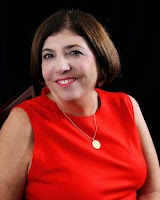 Marilyn decided to become a writer when she read Little House on the Prairie by Laura Ingalls Wilder. Her first short story was The Gold Lace Dress. She wrote her first book, East West Island, in grade school. It featured all of the children in her third-grade class and her teacher read it to the students in installments during class every day. She wrote and directed her first play at age 13, starring her brother and sisters and some of the neighborhood kids. The show raised money for the John F. Kennedy Presidential Library & Museum.

Marilyn is a public relations consultant in Atlanta, a PAN member of Romance Writers of America (RWA) and Georgia Romance Writers (GRW) and winner of the GRW 2009 Chapter Service Award. She is also a member of Atlanta Writers Club. Marilyn was past chair of the Roswell Reads steering committee and serves on the Atlanta Authors committee. She writes in a variety of genres from humorous women’s fiction, historical romantic thrillers, romantic suspense and paranormal/fantasy. She loves to travel and often sets books in places she’s visited.

She was born in Miami, Florida, and graduated from The University of Florida in Gainesville, Florida, with a Bachelor of Science in Journalism (Public Relations) and a Minor in English (Creative Writing). Go Gators! She lives in Roswell, Georgia, with her husband, and she spends a lot of time hovering over her two wonderful daughters.

Marilyn Baron will be awarding a $25 Amazon or B/N GC to a randomly drawn winner via rafflecopter during the tour.
a Rafflecopter giveaway
Posted by Andi at 3:30 AM
Labels: book excerpt, book promo, giveaway, Goddess Fish, historical fiction, mystery, thriller