Review of On the Edge by Claire Gillies

Welcome to the book tour for On the Edge by Claire Gillies! Today I'm sharing with you an excerpt as well as a few thoughts on the book. Then the author tells us about what she would do if she had a time machine. It's interesting! Let her know your thoughts in the comments section. And then be sure to follow the tour for even more. Best of luck in the giveaway! 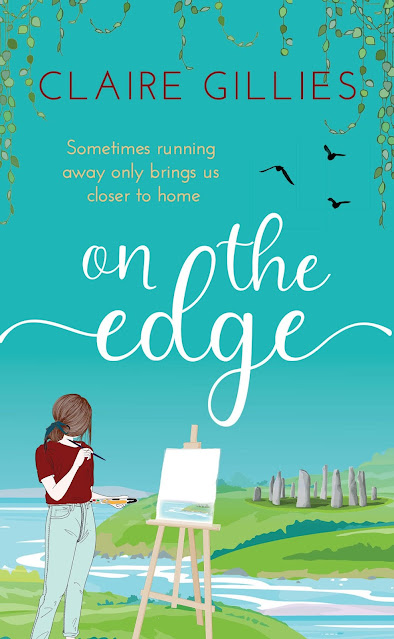 Catherine MacGregor spends life daydreaming her way out of the perils of a dead-end job, and a dwindling love-life. Rather than face imminent redundancy, Cat finds herself giving up her life in the city, and moving to a remote Scottish island for a fresh start.

Unlocking her passion for art, things have never looked better, until the handsome but elusive musician Patrick Flannagan takes to the stage, complicating her best-laid plans.

Cat’s past could be catching up with her at last. Can she unlock her own secrets, and learn to love again, in time to save her brave new beginnings?
Read an excerpt:

Before Cat could grasp her drink, she was approached by a younger man who looked a little nervous.

“Would you like to dance?” With his open, earnest baby-face, Cat put him at about eighteen, and was flattered.

“Yes, why not!” She fanned her face, trying to recover from the previous dance, ready to launch into another. This one was different, still with a deal of twirling, but with variations involving kicks and a burst of graceful hopping. Cat laughed as she missed a few steps, trying to keep up both with the music and her partner. She loved the movement and the strength of the steps; they made her feel so alive, like her stint swimming in the sea earlier that month. Her partner spun her around one last time, and the music stopped suddenly, and everyone clapped again. The fiddler started playing on his own, a much slower waltz to which Cat was about to start gliding with her partner, until a cough came from behind them.

“May I interrupt?” Patrick smiled, and looked down at them both.

“We’re just about to dance!” the boy said “Go find your own partner Paddy!”

“Come on now, Archie!” laughed Patrick, “you know I’m only good at the slow dances and there’s lots of girls lined up by the wall over there just waiting for you to ask them!”

The boy looked at Cat, then at Patrick, considering his prospects for a few moments. “OK then,” he finished reluctantly, handing his partner over without any more complaint, heading quickly in the direction of the waiting girls.

Buy on Amazon
(Affiliate link)
On sale for just $0.99!
**My thoughts**
Cat really seems like a lost soul. She has lost touch with what she really loves in life and is completely stuck in a rut. I admire her for taking charge and deciding to start all over. I know from personal experience that it is difficult to pack up and move to somewhere completely brand new.
She slowly makes relationships around the island and over time not only learns how to love again, but learns how to love herself again. It's something that I think a lot of us need to do, even though most of us are not going to move to a new island to do so.
She also seems a bit naive, but is able to figure things out. I also felt total empathy with her loss of her mother.
The story moved a little slow for me, but I enjoyed learning a lot of new Scottish terminology and about some Scottish culture along the way. I don't think I've ever read a book that takes place in Scotland before and I have always wanted to visit. (I have some Scottish heritage.) I'd really like to visit this island and have an extended stay there, I think.
And of course, one always loves a good-looking musician.
I received a requested review copy of this book. All thoughts and opinions are my own.
You discover a time machine. Where and when would you go to and why?

This is a fun question, although it took me some time to mull it over. History fascinates me, particularly Scottish history. I am from the highlands of Scotland and my local area is steeped in history - Bonnie Prince Charlie arrived on our shores at the start of the Jacobite uprising in 1745. He then continued his journey to Glenfinnan, where he declared his intension and rallied the clans. All these points in history happened in our landscape. We still have seven old beech trees at the end of a nearby field overlooking the water, which were planted long ago in tribute to the first seven men of Moidart, who were with the Bonnie Prince. As interesting as I find this, it's not a time I think I'd want to visit. Being a woman in the highlands around then would have been dangerous, especially just after Culloden. However, I like that period of time, but perhaps a little later on in that century....

Robert Burns is a national treasure, he was a poet who wrote hundreds of works. We celebrate him every year in Scotland - more than our national St Andrews Day! Around the world at New Year, Auld Lang Syne is sung, a song by Robert Burns (or Rabbie, as we call him). He was known as a ladies' man and would fall in love easily, even though he was married! He belonged to the lowlands, but romanticised the highlands. I would love to meet him; he was born to humble beginnings in a farming family but later he would be greatly sought after by the upper classes. I can imagine him in some recital room in Edinburgh, being fussed over by the wealthy, while his eye scanned the ladies. I would be quite content in my 18th century garb, fanning myself on a summer evening, listening to the bard himself recite poetry in an echoey hall. 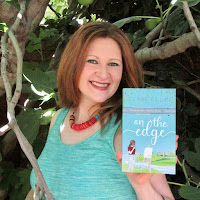 Born and raised in the Highlands of Scotland, Claire’s homeland continues to be a stream of inspiration for her. A clothing designer too, Claire (Lorna) creates one-off bespoke garments using Scottish tweeds and tartans.

Claire currently splits her time between Scotland and Australia with her lovely Irish husband. She is a cat lover (without the cat) and can be found either drinking coffee, researching the best cake haunts, or watching yet another costume drama!

Claire Gillies will be awarding a signed copy of the book. (International) to a randomly drawn winner via rafflecopter during the tour.
a Rafflecopter giveaway
Posted by Andi at 3:30 AM
Labels: book excerpt, book review, contemporary romance, giveaway, Goddess Fish, guest post, second chances