Review of Truffle Me Not by M.K. Scott

Welcome to the book blast for Truffle Me Not, a cozy mystery by M.K. Scott. As you follow along the tour, you will get to enjoy some excerpts and book reviews before you download your copy. My thoughts are included below. I'll be interested to get your feedback! And the author is happy to answer any questions. Best of luck in the giveaway! 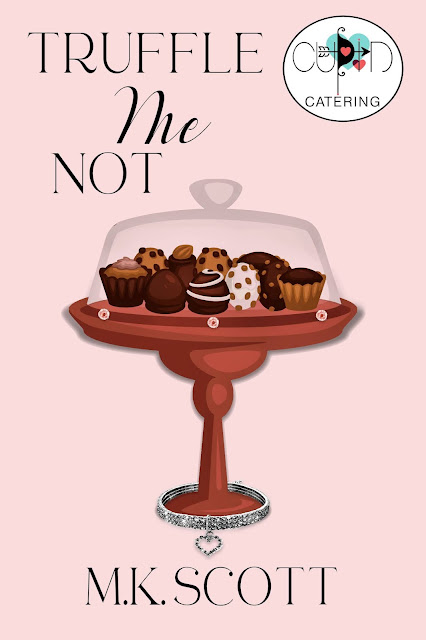 The future of Cupid’s Catering Company hangs in the balance. With a rival bakery, owned by the queen of all mean, rich girls, Della is at a distinct disadvantage.

Della hinges her financial future on winning the local truffle contest. As if there wasn’t enough on her mind, additional problems arise, including missing cats, jewel thieves, and her desperate attempt to find the incredibly kind man who’d lent her hand when she had tire trouble.

Can she solve all these problems and find time to whip up a cookbook at the same time?
Read an excerpt:

Even before she picked up the phone, she felt apprehensive. Why call when she’d see her mother at the bakery in less than thirty minutes. “Hello, Mother. I’m almost in the car.”

“Good! I need your help.” Mabel rushed the words together, forcing Della to decipher the bunched words before answering.

For most of her life, her mother had helped Della. Sometimes, almost too much, which came from being a surprise baby to a couple who had given up hope on having children. As the only child, Della felt obliged to be the best she could be after one of her school mates pointed out her parents had invested all their hopes and dreams in her. A staggering responsibility for a primary school-aged child to handle, but she had dealt with it.

“I need a jeweled cat collar. Red. Lots of rhinestones.”

“Mom…” she stretched out the word, making it into more of a question.

“Buy whatever styles they have. We can return the ones that don’t work.”

Even though her brain might not function at its full capacity without coffee first, almost anyone could deduce an incident occurred involving Prince Purrfection of the jeweled collar. There was a good chance Tony could be the culprit.

“Ah, did Tony hurt Prince? Did Prince hurt Tony? What’s up with the collar?”

Her mother inhaled audibly. “Time is of the essence. Vanessa is going to start looking for her cat once the storm passes. I need a new collar on the feline diva before I push him out the door. Tony thinks I’ve gone traitor by even letting her into the house.” 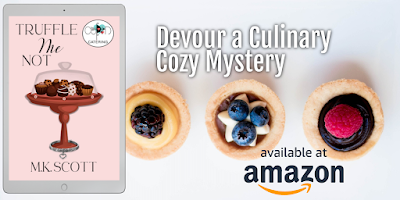 (affiliate link included above)
**My thoughts**
I enjoyed passing an afternoon reading this book. I will say that I would call it more of a cozy mystery light as opposed to an actual cozy mystery. To me, it was more Della's mom who was involved in trying to solve this mystery of the jewel thieves and catnappers and Della was along for the ride. Her focus is more on beating out her high school nemesis who is trying to open her own competitive bakery. And then she is dealing with her expanding business and perhaps trying to figure out who the Good Samaritan was who helped her out when she had a flat tire the one night. She did participate in some of her mom's shenanigans, but not all.
To me, this is more a story of a girl who had a rough time in high school finally doing well for herself and endeavoring to keep on doing well. Little obstacles pop up along the way that need to be solved. That's the part that I related to the most and the part of the storyline that stood out to me.
While reading, I felt like this was not the first book in the series, though it did work well as a standalone. When I finished, I did look it up and it is the second book. I have ordered the first book to give it a read. Again, I don't think you need to read the first one in order to fully enjoy this one. And I saw that there is a third book due out this summer that I have preordered, because I did enjoy this and am curious about where things are going to go for our characters.
So overall, a light and interesting story that kept me occupied on a quiet and lazy afternoon and I'm looking forward to the rest of the series.
About the author:
M. K. Scott is the husband and wife writing team behind The Painted Lady Inn Mysteries and The Talking Dog Detective Agency. Morgan K Wyatt is the general wordsmith, while her husband, Scott, is the grammar hammer and physics specialist. He uses his engineering skills to explain how fast a body falls when pushed over a cliff and various other felonious activities. The Internet and experts in the field provide forensic information, while the recipes and B and B details require a more hands-on approach. Morgan’s daughter, who manages a hotel, provides guest horror stories to fuel the plot lines. The couple’s dog, Chance, is the inspiration behind Jasper, Donna’s dog. Overall, both are fun series to create and read.

Amazon: https://www.amazon.com/M-K-Scott/e/B01M4JGK1A/
M.K. Scott will be awarding a $40 Amazon GC to a randomly drawn winner via rafflecopter during the tour.
a Rafflecopter giveaway
Posted by Andi at 3:30 AM