All Is Set Anew by Jim Cheney

This is the time of year when I want to read all of the thrillers and supernatural thrillers! So let me bring you All Is set Anew by Jim Cheney. Read an excerpt and then download your own copy. Share your thoughts and ask your questions as you follow the tour. Plus then you get bonus chances to enter the great giveaway! 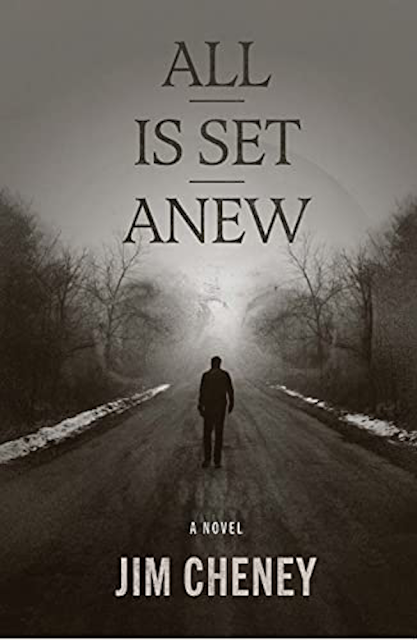 A fast-paced examination of loss, survival, and ultimately acceptance of those things we do not understand but must contend with as if our lives depend upon it.

From deep in the rural Tennessee woods, two brothers flee their murderous father only to find that a violent, supernatural force has followed their escape and will haunt their family for multiple generations.

All Is Set Anew is the story of abandonment and its subsequent revenge, set against a backdrop of characters imprisoned by poverty and self-doubt and their struggle to outrun the evil and illness that relentlessly pursues them.
Read an excerpt:

That afternoon Mary found Edgar at the hog pens and she told him that she wanted to speak with him after supper. She spent the rest of the day packing suitcases for her husband and tidying things around the house. LoLo moved about the rooms silently and Mary worried that her decision was poorly chosen each time the woman’s eyes met hers. It was not a critical exchange of glance, but the way that LoLo diverted her eyes too quickly gave Mary a sinking sensation that made her want to ask her what she would do if the decision was hers. Mary’s upbringing had been as pragmatic as it was cultured, so she looked to facts when challenged. They had let a man like Hicks onto the place. Logic told her that he had raped Katherine, although she could not prove it. Her daughter Renee had left with him, although she could not prove that either. Katherine was alive, and while traumatized, Mary believed that she could guide her back to health. If it got out that Katherine had been raped by a man that Renee had run off with, the impact to the family and its reputation would be devastating. And when she imagined her husband’s reaction to any of this, she felt as helpless as someone looking out over an arid field, begging the merciless, baking sky for relief. Katherine will recover, she told herself. She has enough of me in her that she’ll find her way through.

Jim Cheney was raised in North Georgia and has written professionally for more than 25 years. He has been published in media outlets throughout the United States. This is his first novel. He lives in Franklin, Tennessee with his wife, two boys and three dogs.

Facebook: https://www.facebook.com/JimCheneyAuthor
Jim Cheney will be awarding a $15 Amazon or B/N GC to a randomly drawn winner via rafflecopter during the tour.
a Rafflecopter giveaway
Posted by Andi at 3:00 AM
Labels: book excerpt, book promo, giveaway, Goddess Fish, supernatural, thriller