To Entice a Spy by Diane Scott Lewis

If you like a little suspense with your historical romance, check out this excerpt from To Entice a Spy by Diane Scott Lewis. Be sure to follow the tour for even more. Let the author know what you think along the way. And then be sure to enter the giveaway at the end! 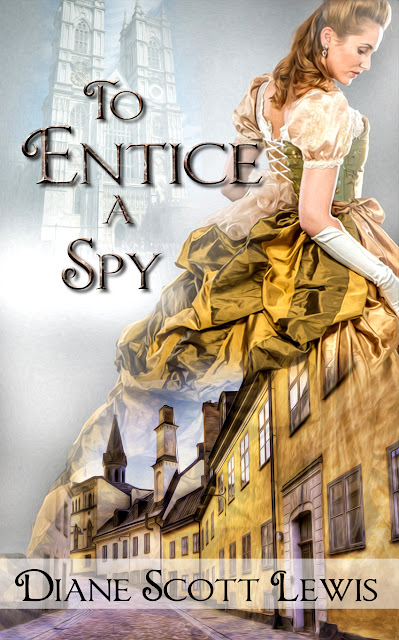 In 1794, Widowed Countess Eseld Trehearne seeks revenge for the brutal death of her female companion during a Paris riot. On her return to England, Eseld delves into espionage to defeat the French rebels.

A ruthless French spy fights for the common man while disguised as an English aristocrat. He’s intent on revenge against those who oppose him.

With the spy stalking them and Robert in fear for Eseld's life, the fate of the couple verges on disaster.
Read an excerpt:

Eseld finished her punch and looked away.

“I was being friendly with the viscount, on a purely decent level, on my part.”

“I’m worried about you. Men can take advantage.

As in being purely mercenary.” Robert’s emotion rose to the surface, rawer than he wished. “I want you to be very cautious.”

“I’m aware of greedy men. And I’m not romantically involved, if that’s what concerns you.” She didn’t sound angry, more a question. A yearning?

“Are you collecting friends or inquiring where you should not?” He toned down his rhetoric, not wishing to upset her.

“That again. You think me foolish, or incapable.”

Her reply was soft despite what she stated. She didn’t deny her motives.

He moved closer. His heartbeat thudded; was she investigating a possible spy as he first surmised?

“You are one of the most capable women I know. Please, confide in me.”

They appeared to still dance around one another—this time with words.

She turned and faced him. “I don’t want us to be at odds.”

She paused for a moment and lightly touched his stock. “Is that all you seek, me to confide? Am I but a contrary girl who must be guided by you?”

“Truthfully, as we were always truthful in our youth, I want to kiss you.”

He cupped her upper arms and couldn’t believe he’d said that aloud. Her jasmine perfume invaded his senses.

“Pardon my boldness. I’m not of your station anymore, am I?”

“That doesn’t matter to me,” she whispered. “But aren’t you still in mourning?”

Diane Parkinson (Diane Scott Lewis) grew up near San Francisco, joined the Navy at nineteen, married in Greece and raised two sons in Puerto Rico, California, and Guam. She's a member of the Historical Novel Society and wrote book reviews for their magazine. She’s always loved travel and history and has had several historical novels published. Her most recent is the Oyster War Novel set in the 1950s: Ghost Point.

Her spy novella, To Entice a Spy, set in England during the French Revolution—two former lovers chase a ruthless spy; will love rekindle as murder stalks them?—will be released on October 11, 2021.

Diane lives with her husband and one naughty dog in western Pennsylvania.

For more on her books visit her website: www.dianescottlewis.org

Diane Scott Lewis will be awarding a $20 Amazon or B/N GC to a randomly drawn winner via rafflecopter during the tour.
a Rafflecopter giveaway
Posted by Andi at 3:30 AM
Labels: book excerpt, giveaway, Goddess Fish, historical fiction, historical romance, romantic, suspense