Linda K. Hopkins, author of 'Bound By a Dragon' tells us what we need to know about dragons

Not all dragons are the same, and in fact, there are two different and distinct dragon species - the Asian dragon and the European dragon. These two species differ quite widely from each other. The first, the Asian dragon, is more serpentine in form, with a very long, sleek body. It has four legs and deer-like horns on its head, but it does not have wings, and they do not breathe fire. Asian dragons can control the air around them, and it is through this ability that they can take flight.

European dragons, on the other hand, have much larger, bulkier bodies and huge wings which allow them to fly over vast distances. They also have very long and incredible strong tails. If you have read Bound by a Dragon, you will know that the dragons in this story are European dragons. The rest of this discussion pertains specifically to the European dragon.

As we know, dragons can breathe fire and flame. The reason for this is that dragons are created from fire. Their very essence is fire, and their physical form contains the flame. If you draw close to a dragon, you will feel the heat that emanates from its skin. Although a dragon can keep the flame contained, it will breathe fire when roused by anger or any other strong emotion. If you find yourself near an angry dragon, run for water!

The neck, back, tail, and legs of a dragon are covered in tough, overlapping scales, creating an impenetrable armor. It is almost impossible to harm a dragon by attacking the backside of the creature. The underside of the dragon, the stomach, is covered in thick, leathery skin. It is still very difficult to harm a dragon from the front, since dragons will naturally protect this more vulnerable area.

Dragons have huge wingspans which allow them to glide on air currents for very long distances. It is commonly believed that dragons have leathery wings, like that of a bat, but the wings of a dragon are actually far finer. If you get a chance to examine a dragon's wings closely, you will see that the wing surface seems woven from many strands of something resembling very strong silk, resulting in a very thin, but incredible strong surface. The wings are also very light, and can easily be folded against the dragon's back. The wings catch and reflect light so that when the dragon is seen in flight is often shines and glimmers.

The dragon in Bound by a Dragon is gold, but dragons come in almost any color, and this coloring is passed through the genes. The rarest dragon color is white, although there have been a very small number of reported sightings of albino dragons.

Dragons tend to live very long lives, and it is not uncommon for dragons to live five or six hundred years. The oldest reported dragon lived to 897 years, but since this is based on oral tradition, reported by humans living in the same vicinity as the dragon and passed from one generation to another, this is very difficult to verify.

It is often said that dragons are cunning and sly, but this is not strictly true. Like humans, dragons have individual personalities and character traits, so while some may be cunning, others will exhibit more benevolent attributes. They are known to be intelligent, and with such long lives have developed a very accurate understanding of humankind.

Dragons are carnivores and require vast amounts of meat to live, but dragons have been known to eat meat other than human flesh, such as beef, mutton and venison. It would seem that dragons can exist for long periods without feasting on human flesh, although they do seem to have a need for it once in a while. Whether this is because they prefer the taste of human flesh or because they need it to survive is not understood.

The most interesting quality about dragons is the properties of their blood. It has long been understood that dragon blood has the ability to heal even potentially fatal wounds, but it is not understood how this occurs. Further study may reveal the answer to this perplexing question, but since dragons are not very accommodating in allowing scientists samples of their blood, the answers may still be a long time coming. What we do know is, if you can get your hands on dragon blood, hang on to it for all you are worth. 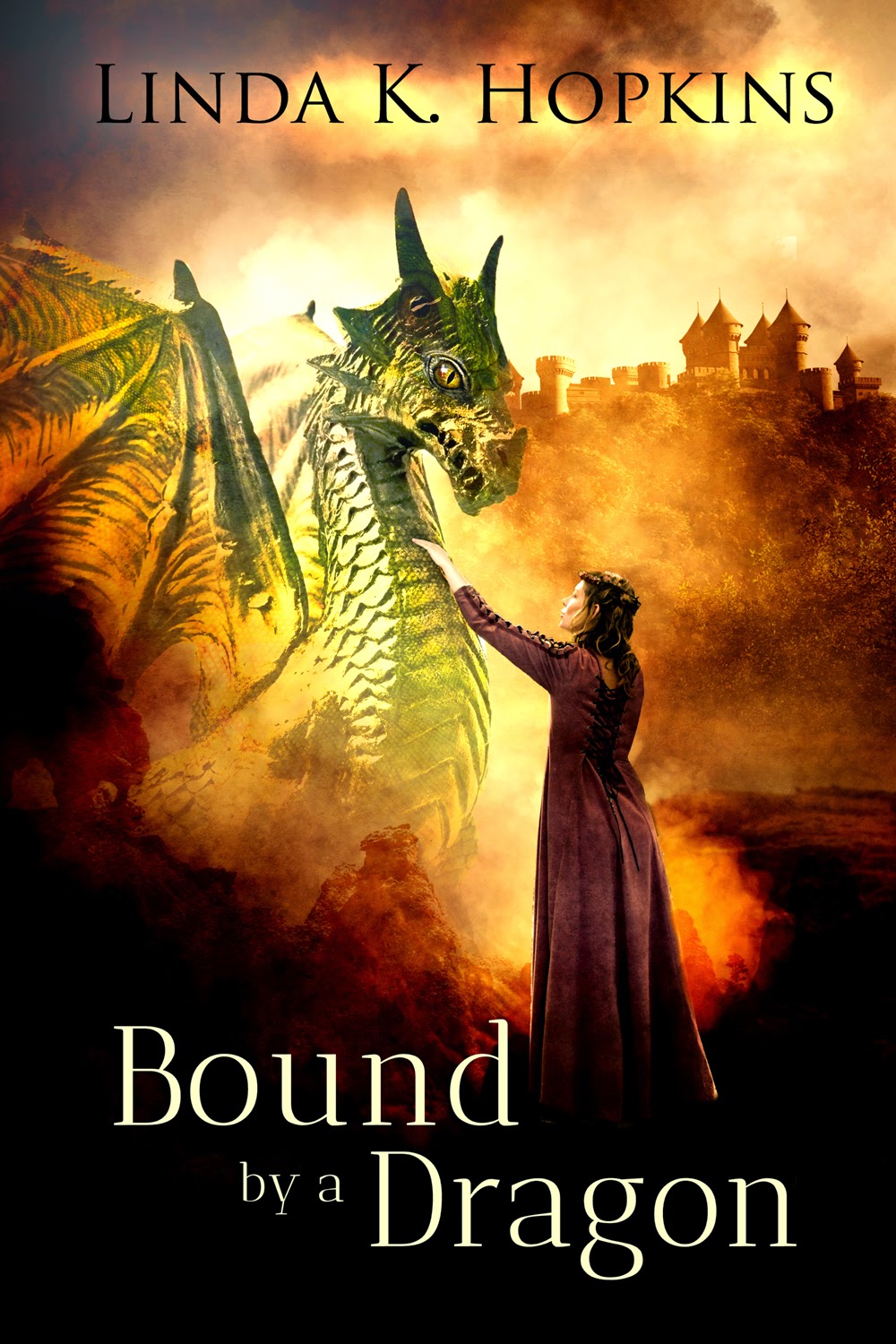 Bound by a Dragon
By
Linda K. Hopkins

The dragon turned its head and seemed to look straight at Keira. Pulling her arm out of her sister’s, she drew herself upright and stared straight back, meeting the golden eye of the dragon before it turned its enormous body in a slow, fluid motion and lazily flew towards the mountains.

A dragon has moved into the neighborhood of Keira's small, medieval village, unsettling the residents as they fear for their safety. All except Keira, who is fascinated by the creature, both dangerous and beautiful. But when Aaron Drake decides to take up residence in his ancestral home of Storbrook Castle, set deep in the nearby mountains, Keira finds herself unsettled by the handsome stranger. Why did he decide to move to Storbrook, almost eighty years after it was last inhabited, and does the dragon really live in the caves below the castle?

As she watched the mighty beast before her, the dragon bent its neck into a graceful arch downward, bringing its face closer to Keira’s eye level, its golden cat-like eyes watching her intently. Keira quelled the desire to step back, instead keeping her feet firmly planted as she continued to gaze at the dragon.

“Why did you take me?” she finally asked, shuddering at the thought of what might have been. She lifted her hand to her cheek, feeling the sting of scratches scored down her face. A flash of sharp teeth made her draw in her breath as the dragon replied with a growl.

“I’m sorry Keira,” it said. “I should have been there sooner. When I think of what that boy was about to do …” The dragon stopped and pulled in a breath. “I shouldn’t have left him alive!”

Keira trembled at the thought. “But why?” she said. “What does it matter to you?”

The dragon stared at her for a long moment, until finally it breathed out a sigh, sending sparks flaring from its nostrils. “Come closer, Keira,” it said.

Keira hesitated, wondering what the dragon intended to do with her.

“I’m not going to hurt you,” the dragon said.

She looked at the mighty beast before her and suppressed a shudder. Its claws rested on the ground, razor-sharp and menacing. She could see its pointed teeth and knew that it could rip her to shreds in an instant, or burn her to a crisp with one hot breath. One swipe of its massive tail could send her flying through the air, or leave her broken on the ground. Keira knew that the dragon could wield mighty power with barely any effort, striking fear into the hearts of many brave men. But as she looked at the dragon, gazing into eyes that blazed like the fire it breathed, she felt her fears slowly melt away. 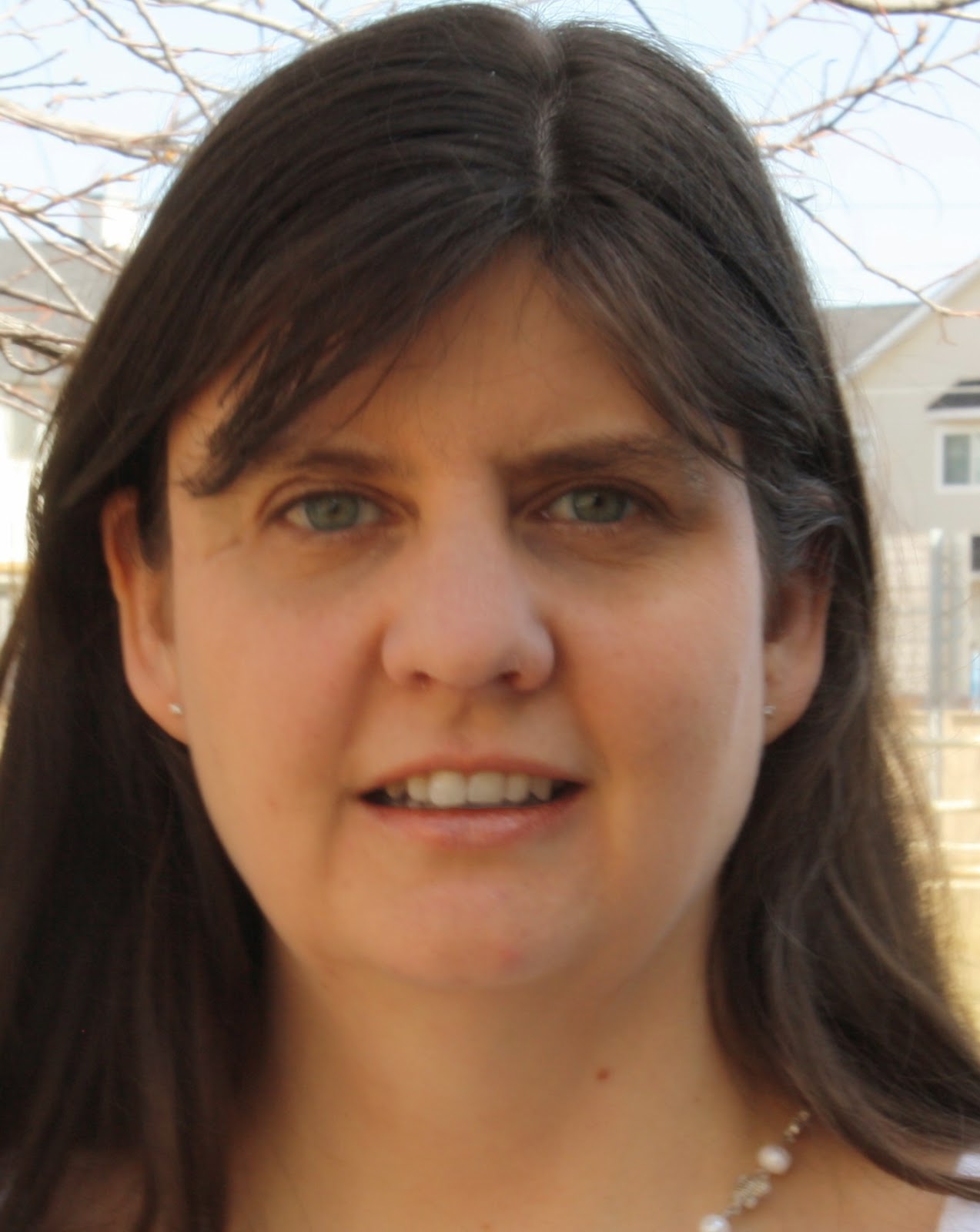 AUTHOR INFORMATION:
Linda K. Hopkins lives in Calgary, Canada, with her husband and two great kids. When she's not writing, she's usually reading (a great pastime when you are trapped in a snowbound landscape eight months of the year!), tinkering on the piano or just living life!

The author will give away a $25 Amazon gift certificate via Rafflecopter. Follow the tour for more chances to win!