David Carter, author of The Inconvenient Unborn, on Real Books versus eBooks 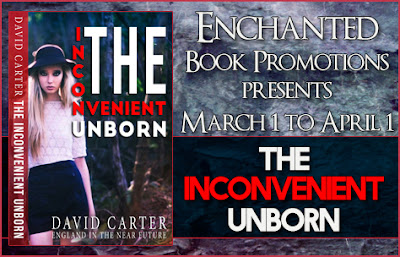 Today I would like to welcome author David Carter to the blog. He is not only an author, but also a bookseller, quite aware of how the market has been playing out between ebooks and hard copies. He shares some interesting insights in this guest post. Then, you can check out his book The Inconvenient Unborn.

Which type of book do you prefer reading? Hard copy or ecopy?

I read in the press yesterday that “real books” are making something of a comeback. Phew! I’m pleased about that, seeing as my profession is the one of being a bookseller.

I now have more than 12,000 titles in stock, yes in the house, and please don’t ask me where they all are, because they are everywhere! Well, maybe not in the loo, for obvious reasons. Users might run out of tissue and grab pages from a nearby title, and imagine what a disaster that would be. There are limits!

And I can honestly say that I have never sold an ebook for any other writer, (yes, I do sell them by yours truly) which is almost the exact opposite of real books, which I sell every day by any number of other writers, but maybe not so many of my own – weep weep!

When ebooks and ereaders first appeared I stupidly went on record in saying that they would never catch on. Yes, I actually put that in print, insisting that the machines wouldn’t work in the sunlight, they would forever be running out of juice, would make readers cross-eyed, and worse besides.

There was even a theory that they might make men impotent. All predictions way off the mark that couldn’t have been more wrong, especially the last one, and I am happy to belatedly set the record straight.

Now, I sell ten ebooks of mine for every one “real book”, and the odd thing is that though I sell the ebooks for a quarter of the price of an actual book, I still make more money on the ebook, and I guess that makes sense too when you think there are no printing costs, no packing and postage expenses, and the buyer receives the ebook within seconds too, so there is rarely a problem on delivery.

So, it’s good to read that “real books” are making a comeback. Personally, I don’t think they ever went away, for there is something truly special about the feel and smell of a freshly printed book, something that a sterile ereader can never reproduce, though I am now becoming very wary of dissing technology, for before you know it, some boffin will invent a smell-o-vision app that can release occasional odours of new book and fresh print. God forbid.

It is 540 years this year since William Caxton introduced the first printing press into England in 1476, printing the first mass books in English. Nice to know that such an operation has lasted that long, and that there is life in the old bear yet.

Will “real books” fend off technology for another 540? Probably not, but let’s hope so, if only for the wellbeing of the poor bookseller, or we’ll all go hungry. Mind you, some of us could do with losing a little weight.

Happy reading to you, wherever you are, in whichever format you prefer. 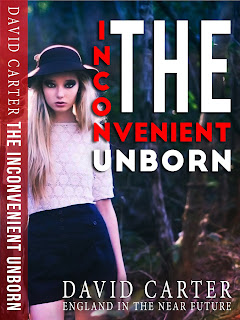 England in the near future –

The Cazenoves and the Wilsons don’t get along, leastways the parents don’t – the teenage kids adore each other, but when the oldest Wilson girl falls pregnant, sparks fly.

Donald Cazenove just happens to be Fred Wilson’s boss, but Fred isn’t without influence himself, being the senior shop steward, and the business is struggling anyway, and a strike could play havoc with Donald’s figures.

“The Inconvenient Unborn” is set in England in the near future where after years of austerity, a left wing Labour Party has been returned to power with a huge majority, and they now intend to change Britain forever. They have a mandate. They have conviction. They have momentum.

And then there’s a state visit to Britain by the most powerful man on the planet, Yuri Premakov, the Russian President, and his precocious and very beautiful film star wife, Tamara, bringing gifts of gas and oil and energy, at a price, and he’s scheduled to visit Lymington on the south coast, where most of this book is set.

So who wins out? The Cazenoves or the Wilsons, and what exactly are Yuri Premakov and his vast entourage up to in Britain?

“The Inconvenient Unborn” will take you on a journey you can barely imagine.

Available in ebook and hard copy

Read an excerpt from The Inconvenient Unborn

To put this into context, Oliver Cazenove, the guy, is eighteen going on nineteen, and still at school, while the girl, Sue, is thirty, with a penchant for younger men. She works behind the bar at Olly’s local pub, which is where he met her.
Oliver was the first to leave the house at twenty to eight. His big hair had dried, but it still had that just washed and fluffy look, but no matter how roughly he treated it, it always seemed to fall back into perfect place, and he was grateful for that.
He was standing self-consciously outside Bestdas Supermarket by five to eight and though he knew his father was not inside, many of the people who worked there were aware he was the boss’s son. The sooner Sue arrived and whisked him away the better, and it was five past when the cream and maroon Cayton Cerisa whizzed up and abruptly stopped before him.
The passenger window was open and she leant across and smiled through it and said, ‘Don’t I know you? Would you like a lift?’
‘Damn right I would,’ grinned Olly, as he jumped inside, as Sue hit the accelerator before he’d even had time to plug in his belt.
‘Where do you fancy going?’ she said, taking her eyes off the road, and glancing at the big kid with the newly washed hair beside her. He smelt good too, looked good and smelt good, what more could a young woman want, and she was still young too at just thirty, though nowhere near as young as him. There was no law against it, was there? He was old enough and perfectly legal and fit and able, and that was all that mattered
‘Don’t mind,’ he said, ‘you choose, but somewhere away from Lymington, eh?’
‘Oh yes,’ she said, ‘somewhere well away from here,’ and she headed across town and zipped onto the Brockenhurst road.
The radio was on, one of the local music stations, and The 27 Club came on.
‘Turn it up!’ he said.
‘Do you like these?’ she said, smiling and shaking her head.
‘They are brill, simply the best!’
‘Don’t see it myself, don’t see what all the fuss is about.’
‘It’s probably an age thing,’ he said, in all seriousness.
‘Oh, thanks, Olly!’
‘Sorry, Sue, I didn’t mean you’re old or anything, ’cos obviously you are not, but I think they appeal more to the teens and twenties.’
‘I’m not that long away from being a twenty,’ she pouted, and accelerated hard through the New Forest, slowing to avoid falling foul of the obligatory radar trap.
‘I know that,’ he said, ‘and you certainly don’t look old either, you look…’ and he left the sentence hanging in the air.
‘Yeah? I look what?’
He stole another peek at her.
‘You look absolutely fab actually, really beautiful,’ and she did too, in a low cut skimpy summer dress that showed off her breasts wonderfully.
Sue’s mouth fell open. Like most women she adored compliments, but one from a young kid like Olly, so sincerely said, well that was something else. She’d always known she’d liked him, but the way he spoke, and his appearance, and the way he looked at her, had an effect that was indeed special.
There followed a few moments of silence before Olly asked, ‘So, where are we going?’
‘There’s a couple of nice pubs on the Totton road from Lyndhurst,’ she said, ‘backing onto the forest. We could have a little walk too, if you want.’
A walk too, if you want, he pondered on her words, in the forest on a warm summer’s evening. What was there not like about that?
‘Great,’ he said. ‘Suits me.’
‘Have you eaten?’
‘Nope. You?’
‘I have not, thought we could get a bite to eat too.’
‘Sounds good, I’ve a huge appetite.’
‘I’ll bet you have,’ she said, grinning across at him, and they both laughed aloud.


I have been writing for longer than I care to remember. Even as a ten year old child I would design my own newspaper and fill it with family news, much to my mother’s amusement when she once found a copy containing a story that she didn’t fully approve of!

My writing started seriously when I was in business and I was approached to write a column, and that developed into writing columns for newspapers and magazines in many fields, including computing, commodities, farming, property, sport, philately, business and small business, many of which I have actually been paid good money for, and that always brings a nice feeling that never goes away.

My syndicated online articles have now been read by over 300,000 people across the globe and show no sign of slowing down.

It was a fairly small step after that to writing books and I have now written more than a dozen, both fiction and non fiction, and I try to write and complete at least one full length book every year.

Like most writers and aspiring writers I have many more in the pipeline, both part finished, abandoned, or in an unedited state, and finding the time to complete them is always the big enemy there.

Ideally, I would like to find a literary agent who could assist me in taking my writing to the next level, so if you are out there and you like what you see and read then do please get in touch.

Besides writing I sell books for a living and currently have more than 10,000 titles in the house and please don’t ask me where they all are because the simple answer is that they are pretty much everywhere!

I am currently working on a new Inspector Walter Darriteau novel and after that I may go back to writing a sequel to Gringo Greene, though ordinarily I prefer to write something completely fresh, rather than revisiting old ground.

It always amazes me that someone like Lee Child can write book after book featuring the same character and similar adventures, though all best wishes to him for he has been incredibly successful.