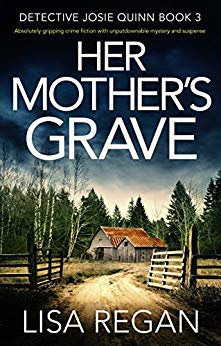 When two young boys discover human bones buried beneath a tree in a trailer park, Detective Josie Quinn races to join her team at the scene. She used to play in those woods as a child, happier outside and away from her abusive mother, Belinda Rose.

Josie’s past crashes into her present when a rare dental condition confirms the bones belong to a teenage foster-child who was murdered thirty years ago. A girl named Belinda Rose…

Josie hasn’t seen her mother in years but, with an undeniable connection between her mother and the dead girl, does she dare track her down?

Just as Josie gets closer to uncovering a secret that will shatter her world forever, another body is uncovered. It’s suddenly clear that someone very close to Josie will stop at nothing to keep the truth buried forever.

As she battles the demons from her past, can Josie stop this killer before another precious life is taken?

**My thoughts**
This third installment of the Josie Quinn series is even more riveting than the first two. I had to hide my Kindle so that I would actually get a little bit of sleep, because I was not about to put it down, but also had to be at work early.

This one finally takes us deep into Josie's history, which has been lightly touched on without a lot of detail. It's so much worse than I ever thought. And it is tied into the latest murder mystery to hit the town.

This story also exposes a character twist that I quickly picked up on in the first book. I'm excited to finally have that revealed as well.

It's another great installment. You can conceivably read it as a standalone, but will appreciate it more if you read the series in order. I can't wait for the next one.
Posted by Andi at 10:00 AM