Even better than reading a great romance is reading one that takes place not too far from where I live. I loved this story and am sharing all of my thoughts with you. There's also an excerpt to give you a sneak peek. And author Jo McNally even tells us a bit more about crafting this fictional town in a very real place that is near and dear to my heart. Enjoy her thoughts and then let her know what you think. Be sure to also follow the tour for even more. And you can enter the giveaway at the end! 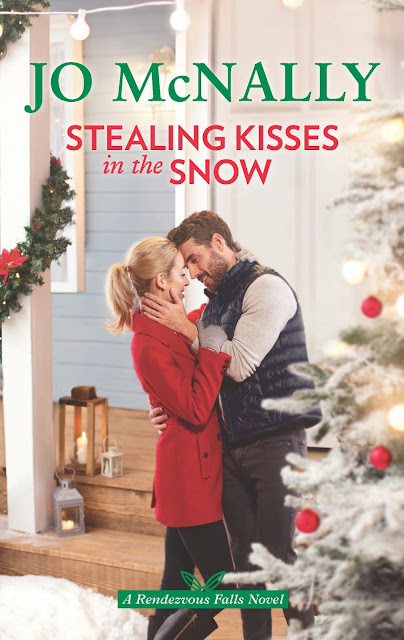 Stealing Kisses in the Snow

Between juggling two kids, two jobs, and a fixer-upper house, single mom Piper Montgomery is so busy she can hardly see straight. But when rugged biker Logan Taggert strolls into the B&B where she’s working, she can’t help but stare. He has bad boy written all over him. She’s promised her kids a “perfect Christmas” this year, and bad boys aren’t part of the plan. But how can she resist?

Once his grandmother is back on her feet, Logan can leave her Victorian B&B get back on the road. It’s where he belongs after all, even if his grandmother’s matchmaking book club biddies try to convince him otherwise. But there’s something about beautiful, spitfire Piper that makes him wonder if kids and commitment might be just what he needs after all.

As Christmas draws ever closer, so do Piper and Logan. Could these two opposites find all they want this Christmas is each other?

Logan Taggart had been thrown out of plenty of places in his lifetime, but never by a pretty little ponytailed momma wearing a ruffled yellow apron. He managed to squelch his smile, knowing it would be a mistake to laugh.

The golden-haired munchkin clutching his fingers right now was clearly the woman’s daughter, and he probably looked like an ax murderer. He gently freed himself from the child and stepped back, raising both hands and modulating his voice carefully.

“Ma’am, I’m sorry. The little girl said she wanted me to go to the kitchen, and I was heading here anyway…”

The woman seemed flummoxed. Her chest rose and fell rapidly, her blue eyes wild as she stepped closer. She raised the mop higher with one hand, then dropped her phone on the counter with the other so she could snatch her daughter’s hand, tugging her to safety behind her. She waved the mop again, as if that would really protect her if he posed a threat. He was a foot taller and a good seventy pounds heavier than she was. The biggest danger to him was in her other hand—the cell phone she’d picked up again.

**My thoughts**
Right off the bat, I fell for Piper. She is widowed and struggling to stay afloat while raising her two kids. And yet she has amazing strength and determination. I also immediately adored her daughter Lily, who is one of those smart and spunky kids I have always enjoyed being around in my classroom and otherwise. Logan starts out a little rough, but you know he is going to soften. And Piper's poor son Ethan is a teenage mess, struggling with the usual teen drama, amplified by him still reeling from the loss of his father four years ago. And then there is Iris, Logan's grandmother. She is super fiesty and in charge, just how I want to be at 80.

And I have to love the setting of the Finger Lakes, because I live in Western New York and often like to drive down for a day, especially around Seneca Lake. And when the "rowdy group from Rochester" came down and wreaked a bit of havoc, I had to laugh. I promise we're not always like that!

I loved the tension and admiration between Logan and Piper. And I can guarantee that those lake effect snowstorms off Lake Ontario really do provide some of the most romantic nights ever.

I really feel for Piper as she battles her internal struggle of loyalty to her late husband while also recognizing that she is still a young woman with a lot of life inside her and needs to be fulfilled. I have watched a few friends go through the same thing at the same age. And of course Logan is finally wanting to maybe set down some roots after a life of being on the road (or rig, as the case may be).

I really enjoyed reading this and I need to read more of the Rendezvous Falls series. I also want to take a drive tomorrow and relax around the lake and wineries and fall in love all over again.

When people hear the phrase “world building” in relation to writing, they often think of paranormal, sci-fi or post-apocalyptic romance, where literally a new world has to be created. Maybe a new planet with three moons, a future Earth with flying cars, or a place with different laws of physics than ours.

But all books, even small town romances, require world-building to make the settings come to life. And if you’re writing a series, that fictional world has to remain consistent or a reader may be taken out of the story when they realize you just changed the name of Aunt Sue’s bakery or moved the diner to the lakeshore instead of on the mountain like it was in the last book.


Stealing Kisses in the Snow is the second book of my Rendezvous Falls series. The series is set in a fictional town located in a real place—the Finger Lakes wine country of New York State. I wanted the setting to be as genuine as possible, so in the books I refer to nearby real towns like Geneva and Watkins Glen, and the town is on the shores of a very real Seneca Lake. It’s fun to hear from readers who are familiar with the area and tell me I got it right.

But the town of Rendezvous Falls itself only exists in my head. I wanted a town small enough to be intimate, but large enough to hold many stories. I didn’t want it to be too sleepy, so I added a private college, which would help bring diversity and a younger, artsy feel. But the town still felt a little average to me. It needed something that made it unique. Something that gave it a story of its own.

So I filled the town with colorful Victorian houses, and created a backstory about an architect a hundred years ago who started building the homes with all the towers, porches, gingerbread trim and wild paint schemes. The town became famous for “the crazy Victorians of Rendezvous Falls.” In fact, one of the characters in Stealing Kisses in the Snow, 80-year-old Iris Taggart, helped make the town so successful by capitalizing on the unique houses, and then adding festivals to bring in even more tourists.

Between the quirky houses and festivals, and the mix of senior citizens and younger people moving in or growing up, I’d created a setting with enough substance to support a romance series being set there.

Rendezvous Falls may be a fictional town, but it’s very real to me. The Spot Diner is on main street. The college is along the lakeshore, near the marina. The hills above the town have vineyards and wineries, like Falls Legend Winery where the first book, Slow Dancing at Sunrise, was set. When it’s real to me, then hopefully it becomes real to my readers, too.

Jo McNally lives in coastal North Carolina with 100 pounds of dog and 200 pounds of husband – her slice of the bed is very small. When she's not writing or reading romance novels (or clinging to the edge of the bed...), she can often be found on the back porch sipping wine with friends, listening to great music. If the weather is absolutely perfect, she'll occasionally join her husband on the golf course, where she always feels far more competitive than her actual skill-level would suggest.