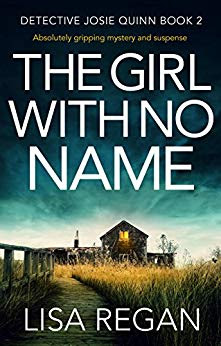 The Girl With No Name

When Detective Josie Quinn is called to a large house on the outskirts of the small town of Denton, she’s horrified by the viciousness of the attack – smashed glass, splintered furniture and blood spattered across the floor. The owner, a single mother, is fighting for her life, and her newborn baby is missing.

A beautiful young woman caught fleeing the scene is Josie’s only lead, but when questioned it seems this mysterious girl doesn’t know who she is, where she’s from or why she’s so terrified…

Is she a witness, a suspect, or the next victim?

As Josie digs deeper, a letter found hidden in the house convinces her the attack, the missing child, and the nameless woman are linked to a spate of killings across the county, and Josie is faced with a heart-breaking decision...

Should she risk the life of one child to save many others? Or can she find another way to stop this killer before any more innocent lives are taken?

**My thoughts**
The second book in the Detective Josie Quinn series starts a couple of years after the first one ended. Josie is situated in her new job as Chief of Police. Her wedding to Luke is approaching. But he is acting a little weird. A recent murder case has really thrown him for a loop.

And then all of a sudden, a new case blows wide open and the whole world turns upside down. Twists right off the bat had me exclaiming out loud, starting my friends who were sitting nearby. And they just continued throughout the whole book. I have a tendency to read in public, and this is one of those books where I could almost embarrass myself with my exclamations with each surprise.

Another interesting thing in this book is all of the random news stories interspersed throughout the book. I had no idea what the connection was, though I knew it would eventually be revealed. And I don't want to giveaway the spoilers, but the way Josie handles certain situations at the end make me admire her even more.
Posted by Andi at 1:14 PM