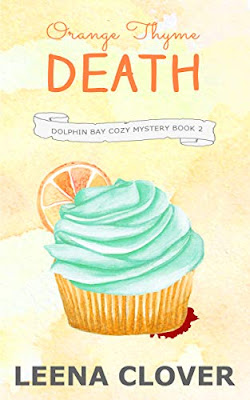 Second in brand new series from the creator of Pelican Cove
*Body at Bookstore Baffles Dolphin Bay*
When a local man is found dead at Bayside Books, Anna Butler becomes implicated in a second murder. Her past connection with the victim raises a red flag the police cannot ignore. The Firecrackers start working to clear Anna of the ridiculous allegations.

The Butler women are immersed in turmoil as the grand opening of Anna's café is postponed and her dreams are threatened once again. As the murder investigation takes a bizarre turn, a certain ex-police chief provides the only bright spot in Anna's life.

Orange Thyme Death is a sensational pageturner that will keep you guessing and leave you amazed at an ending you didn't see coming.

If you like cozy mysteries with fearless heroines, high drama, beach settings and yummy food, you will love this second book set in Dolphin Bay.

**My thoughts**
I read the first book in this series and definitely was not my favorite. But my instincts were telling me that the series had promise, so I went ahead and purchased the second installment. I'm glad I did!

This story simply flowed better. The author even adds in the complication of a third point of view. While the story being told from two points of view in the first one didn't work for me, I felt it really gave a clearer picture of what was going on this time around.

The amateur sleuthing was more on point. I even found myself liking characters I didn't necessarily care for in the first, especially as more details of their past lives were revealed.

And of course, I am rooting for Anna and Gino to make a go of things!

I'm glad I took a chance on this one and will be on the lookout for more!

Read my review of Raspberry Chocolate Murder.
Posted by Andi at 2:08 PM