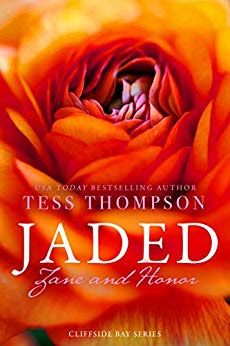 Try as they might, some people can never be “just friends”, as you’ll discover in this standalone, swoon-worthy, small-town romance from USA Today bestselling author Tess Thompson.

Nothing has ever come easy for Zane Shaw, which is exactly why he keeps his guard up at all times. Though he wasn’t raised to cower in the corner and hide from adversity, he’s had more than his fair share of troubles and he’s done being vulnerable to pain.

Honor Sullivan’s living her life much the same way her old friend Zane is, though for very different reasons. It’s not that she’s tired of getting hurt so much as she’s got too much to lose. Plus, she’s terrified that all she can do is hurt anyone else.

Is it possible that after surviving so much disappointment and pain, Zane’s broken heart is perfect for Honor’s broken soul? When these two finally decide to unpack their baggage together, they just might recognize their imperfectly perfect forever underneath the protective shell that the other wears.

USA Today bestselling author Tess Thompson invites you into the world of Cliffside Bay to meet a group of five best friends, the women they love, and the stories that bring each couple together. Each book in the Cliffside Bay Series is intended to be read and enjoyed as a sweet standalone, but for maximum enjoyment read this binge-worthy series in order.

**My thoughts**
I admit it took me a while to get through this book, because it almost broke me. We finally learn more about Honor's past. She was diagnosed at a young age with ovarian cancer and had to have a full hysterectomy and oophorectomy. Not only can I not have kids myself, but I lost my aunt to ovarian cancer right about the same time this book came out. And then there is the whole storyline of Zane dealing with his father Hugh's Alzheimer's. The same month I lost my aunt to ovarian cancer, my mother succumbed to her many years of battling Alzheimer's. I cried so hard throughout this book because I was able to relate to these storylines, and Tess captured the emotions so well. Even though I call myself a writer, i don't know if I could quite capture them as well.

In spite of those hardships in the noel, there are the beautiful parts as well. We get to know Sophie, who is Zane and Maggie's half-sister. To fully appreciate her story, read Book 2, Deleted.

Honor and Zane have had tension between the two of them for years, but are now hopefully going to battle through it all. Honor has stuff creep up from her past. Zane is dealing with many life changes. He is still struggling with his fiancee leaving him and is trying to achieve his dream of a brewery. And he never got over his mother's abandonment.

Honor grew up in the foster system and has always had to fend for herself. Neither one thinks they are good enough for the other.

This book has those moments of clarity that are just so rare and beautiful in life. This amazing twist of fate series serves to heal wounds. I love how Zane calls them their "perfect storm." Very well done.
Posted by Andi at 8:00 AM