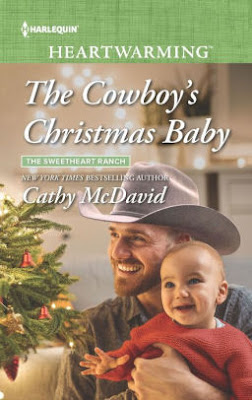 She gifted him with a daughter.

He stunned her with the truth

When Tanner Bridwell discovers he’s a father, he gains some much needed hope. A year ago, Tanner lost his livelihood as a champion bull rider, and—more important—Jewel Saunders, the love of his life. Now this cowboy wants to do right by his family. But first he must reveal a stunning secret that will send Jewel and his beloved daughter either packing…or into his arms forever!

**My thoughts**
I adore the Sweetheart Ranch series and was excited to see a third installment! The ranch doesn't feature as prominently in this one as in the first two, where I felt it was almost a character. But it still provides a beautiful setting for parts of the story.

Tanner and Jewel were separated over a year before due to a huge scandal, only he had no idea that she was pregnant. She sort of tried to find him, but not hard enough. I have to say I agreed with some other characters that she could have tried even harder, but also understand why she wanted to distance herself from the scandal. And I am impressed that Tanner was able to hide as well as he has.

It's miraculous that the two of them managed to stumble upon each other again, especially being in a new state. And yet, that makes their reconciliation almost meant-to-be, wouldn't you say? It's amazing that they have a chance for a reconciliation, especially as the truth is finally slowly coming to light. It's not like they ever stopped loving each other. The truth should be able to allow them to work out their differences. Plus they have this gorgeous little baby to think of and that changes everything.

I think it was good for the two of them to have that year apart, because they have had to grow into themselves more. They're also being forced to take a hard look at family and priorities. If they can figure out how to make it work between the two of them, they may actually be stronger than before. And I'm rooting for them to figure it out.

We get some sneak peeks into the lives of favorite characters from the first two books, and I love checking in with them. I am looking forward to even more in the series!
Posted by Andi at 11:16 PM