Character creation involves a lot more than just giving a physical description. Today, author Willard Thompson, who is also a writing coach, gets into that topic, plus shares an excerpt from his book La Paloma. Feel free to reach out to him with any questions! And also be sure to follow the tour. You'll be able to enter the giveaway along the way!
*******************************
When most readers think about characters, they expect physical descriptions. The woman has blue eyes and blond hair that’s cut short with banks, and dimples around her mouth, etc. for example. Or for men: he’s darkly complexioned, six feet tall, ruggedly built and balding. Readers expect that kind of description, but it’s not necessarily good writing. It works best, perhaps, when readers are lazy, expecting to have authors spoon-feeding stories to them, but readers of more serious fiction should expect and demand more.

Let’s start with physical descriptions. I want my readers to picture the character vividly in their mind. If I give them to much physical description the character actually stays vague to them because they haven’t worked in their imagination to create the image. One of my best female characters was described only as having dark hair and a fair complexion. Nothing else. Other characters said she was beautiful or pretty or attractive depending on how they engaged her, but they never would have verbalized details, that’s reader-feeder. The reader is inspired to form whatever image works for them, and in the imaging perhaps bonds more closely with the character.

More importantly, characters should be described by what they do, how they act. Word choices are very important in describing a character. Does she pick at her food or launch into her meal? Does she charge up to her beau or slink up to him. Here, notice the use of verbs not adjectives or adverbs in the description. Show the character in action; use active verbs. And don’t be passive. She was wearing a modest gown should be she slipped into a slinky dress.

Naturally, the same is true of creating character dialog. Readers lean much more about a character by the way they talk—shouting vs. low-throated—and what vocabulary they use—slang vs pedantic—and what they say—light-hearted vs philosophical. Same goes for interior monologues, but caution is needed here to avoid dumbing down the reader’s involvement.

And probably less is more is always better. Stopping a scene in order to describe the characters in it is never as good as showing those characters in action.

Characters are what makes stories come alive. Fiction writers don’t have Hollywood stars to educate the reader by their physical appearance, their actions and their speech. We have to provide the clues that instruct readers. Try picturing Scarlet O’Hara without seeing Vivian Leigh. Margaret Mitchell did.

I am a writing coach and would be happy to consult with any of your followers who are interested in improving their writing skills. They can contact me at WillardThompsonBooks.com. 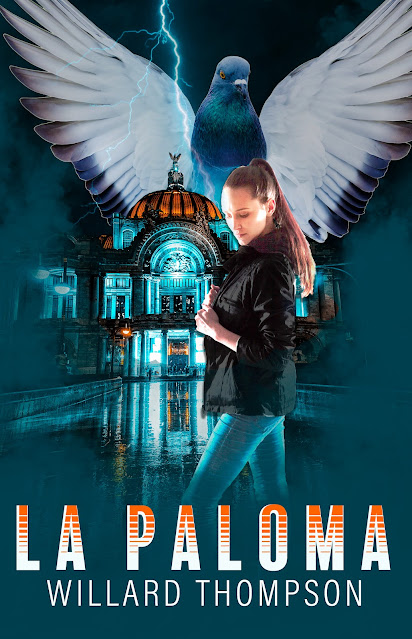 When Teresa Diaz's father is arrested in an ICE raid in a Los Angeles area city and deported back to Mexico, her family begins to come apart. She is a student at UCLA on a scholarship for undocumented aliens (Dreamers) looking to have a life in the U.S. in communications. Her brother in High school and her elementary school sister begin having serious troubles without a father in the household.

At work in a fast-food drive-through, Teri, as she wants to be known is approached by a Mexican gangbanger who offers to take you to her father. Doubting the guy wants more than picking her up, she resists, but day by day, as her sister is sent home from school and her brother is brought home dunk by the police, she gives in and goes across the border with him. Against her wishes, he takes her to a beach house in Tijuana and leaves her. She learns that illegal activities are going on in the house but without transportation, and without a birth certificate --either Mexican or American-- she can't cross the border alone.

After several days, virtually a prisoner, the owner of the house, a fat woman known as Mama Gorda arranges to get her across the border with a young Mexican man who rides a fast motorcycle. On the way, he takes her to lunch and there offers to talk her deeper into Mexico to find her father. She agrees, travels in his private plane and begins a romance while searching for her father in Michoacan state. The more she becomes involved, the more she is involved in activities she doesn't understand but suspects they're illegal.

Returning to Monte Vista, her LA area home, still without her father, she finds she can no longer return to UCLA, seeks a job, connects with a Latina who bullied her he school. When her brother is arrested for jobbery, Teri returns to Mexico seeking help from the people she suspects to belong to a cartel.

Ultimately, she is sponsored by the people in Mexico to participate in the Miss Mexico contest, not realizing it is the Cartel that is promoting her. In the end, she will face a life-changing decision whether to continue her romance with the son of the cartel's head or try to stand on her own. And whether to remain in Mexico or return to LA.
Buy Links
Amazon * Barnes & Noble
Read an excerpt:

Javier looks over at me from the pilot’s seat. He must have noticed my clenched hands, or my pallor or the way I sit slumped down in the seat. “First flight in a small plane?” he asks.

He laughs. “An American girl like you has never flown?”

I think I hear a hint of sarcasm in his voice when he says, “American girl.”

I am an American girl, but not a privileged one. Mama wasn’t anxious to go any place that might require IDs. There was no extra money for vacations to places that required a plane ticket. At first, our family spent all our holidays with Rogelio and Lupe, but after Antonio died, mama and Lupe drifted apart.

“There’s only one place I’d want to go,” papa always answered when the question of travel came up, “back to Michoacán where mama and I grew up. I’d like to show you the beautiful land we came from.” At that, he always paused, getting a kind of sad-eyed look. “But we can’t go there, my little dove. So, we’ll go to Disneyland or Magic Mountain instead.”

To Javier, I’m an American girl, To Ryan, I’m a Latina. Mama Gorda said I was neither. She said I was lost. Who’s right? Who am I? I feel lost in this airplane. I sit up straighter in the cushy leather seat next to Javier.

“I am American,” I tell him. “I guess I’m a pretty naïve one though, jumping into a small plane with a man I hardly know. You think I’m a fool, don’t you? Or something worse.”

“Not a fool, Teresa — please let me call you that — but perhaps too trusting. That could get you in trouble in Mexico. Here it is better to trust no one.”

I hadn’t expected that. “Tell me why?”

“Please call me Javier.” His smile is warm and genuine, but he keeps his eyes straight ahead and his hands on the controls.

I wait for more.

Reluctantly, in little bits and pieces, as the plane flies on, he tells me about himself. He says his family is in the export and distribution business. They’ve done well, and he is benefiting from it. A little embarrassed, he says he hasn’t done much to contribute to the family business since graduating from Stanford.

“So why were you at Mama Gorda’s?” The question has bothered me from the start.

His eyes scan the horizon. It’s several seconds before he answers. “We each have our embarrassments,” he starts. “Sometimes it’s good not to ask too many questions. I won’t ask you about what you were doing at Carmen’s house, and I hope you’ll do the same for me. Suffice it to say my family’s company does some distribution work for her. Most of her business is over the Internet, of course, but we deliver some DVDs to L.A.”

“As I said, some questions should not be asked or answered.”

We fly on in silence and land in Culiacán to refuel. Javier leads me into the tiny airport restaurant where we eat a quick lunch in silence. Questions ricochet in my head like the bullets that killed Antonio. What kind of danger am I in? Am I in danger with Javier? Who are all these people? Ever since I agreed to cross the border with Knobhead, it feels as if one bad decision after another is plaguing me. My life is out of control.

Sitting at a table in the small airport lounge, Javier breaks the silence as I sip an iced tea. “Look, I’m sorry if I shock you. I thought it was better to be honest with you from the start. You don’t understand life in Mexico so let me try to explain—” 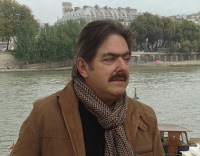 The Girl from the Lighthouse published last year is Thompson's Award-winning historical romance set in California and Paris, France in the 1870s.

He is the gold medal-winning author of Dream Helper, the first in The Chronicles of California series of three historical novels set in the early days of the Golden State. He and his wife live in Santa Barbara, California.
Enter to win a $15 Amazon/BN GC - a Rafflecopter giveaway
Posted by Andi at 3:30 AM
Labels: adventure, book excerpt, book promo, giveaway, Goddess Fish, guest post, suspense