Review of RIP in Reykjavik by AR Kennedy

Welcome to the book blast for RIP in Reyjavik by AR Kennedy! It's the second book in her Traveler Cozy Mystery series and does work as a standalone. I do always recommend reading whole series at some point, though! You can catch all of my thoughts below as well as an excerpt from the story. Be sure to check out the rest of the tour for more reviews and excerpts, like the one I have over at Candrel's Crafts, Cooks, and Characters. Leave comments and questions for the author along the way. And of course, best of luck entering the giveaway at the end! 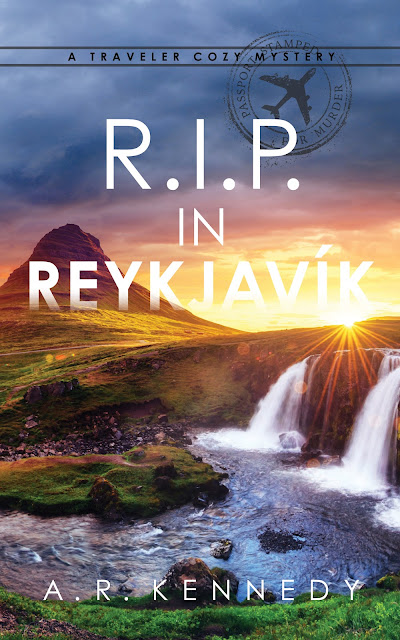 Traveling with your family can be murder.

One wedding party + one estranged mother = another vacation that goes array for Naomi.

Naomi is off on another international vacation. She thinks traveling with her mother will be the most difficult part of her trip until she meets the rest of the tour group—a wedding party. It only gets worse when she finds the groom dead. Everyone’s a suspect on her Icelandic tour of this stunning country.
Read an excerpt:

We stopped for lunch at a local restaurant. As I sat down at one of the long benches, my cell phone rang. Charlotte’s face appeared on the screen. I ran outside to answer it.

“So I heard you had a late night,” Charlotte said.

“Not the time.” I looked over my shoulder to make sure no one had followed me out. “The police think it might not be an accident.”

Charlotte audibly sighed. “Is that why it was a long night? You were with the police?”

“No, one of Ösp’s friends is a police officer.”

“Please don’t encourage Mother. His name is Ösp. I don’t want her nickname to stick.”

“Her nickname? I called him that,” she corrected me. “He looks like Thor.”

I looked over my shoulder at the restaurant’s entrance. “Looks like? How do you know what he looks like? Did you cyberstalk him? Check the hotel’s website for the staff’s pictures?”

“No. Mom texted me pictures.”

Horrified, I asked, “And how did she get them?”

“She followed you to the lobby.”

“Give her a break. She was excited. It was like seeing you on your first date.”

“I’ve been on dates before.” I glanced over my shoulder again for any of the suspects.

“Would you like it if Dad followed you out on a date?”

“I don’t think Dad cares about those things.”

She was probably right.

“Anyway, this police officer I met last night said the autopsy must have shown something because they hadn’t closed the case yet.”

“So you turned your date into a fact-finding mission?”

“It was a happy coincidence.” I thought I heard the door open behind me. I turned to see no one. It must have been the wind.

“Why do you keep looking behind you?” Charlotte asked.

“Just making sure none of the suspects can hear me.”

“Suspects? You’ve turned your traveling companions into suspects?” She paused before adding, “Again?”

I ignored her. “Hurry up, Charlotte. Someone is going to come out looking for me soon.”

I looked at the restaurant door and wished I could run in for my backpack, so I could take notes. “And what would that show?”

“Whatever was in his system. Maybe drugs, poisons.”

“I forgot to ask. If it was poison, how long before he died would he have to be poisoned?”

“Depends on the poison. Probably an hour or two, I guess.”

“Could you get a poison through TSA?”

“In something in a bottle with less than three ounces, sure. Could have been a powder. They could have bought it locally too. Rat poison and antifreeze has been used in a lot human deaths.”

“Can you think of anything specific I should look for?”

“You should look who’s coming up behind you,” she said before hanging up.

Buy Links
Amazon * Books2Read
(affiliate link included)
**My thoughts**
I enjoyed the first book in this series and had been looking forward to this sequel. It's a fun little cozy mystery that you can easily read without having read the first one. But there are enough references to the first one that you just may want to go back and read it.
I don't usually comment on covers, but this one is absolutely stunning and amazing. I've had friends visit Iceland and I drooled over their pictures, too. I want to see all of this for myself some day. And reading this book detailing Naomi's adventures in spite of the unexpected death on the first trip really makes me want to go even more to see all of these places for myself. (Puffins, hello?!)
Naomi definitely shows some growth from her first set of adventures. It's nice to see that her and her sister are getting along. Her mother is a tough pill to swallow, though, and will probably drive a lot of people batty. While I read about her, I kept thanking my lucky stars that my mother didn't annoy me that much! Although, I don't know that I would have made it on an overseas trip with her.
But Deirdre is who she is and the story would not be the same without her attitude and antics. Throw in this mysterious wedding party where everyone seems to be hiding something and a couple of hottie Icelandic men and you have one helluva motley crew going on.
As for the mysterious death, I figured out the murder weapon pretty much right away. I had suspicions about the actual murderer off and on. For me, this book was more about the Icelandic adventure and was a great way to pass the time this evening after a long and rough day. I'm looking forward to the next one!
Thank you to the author and Goddess Fish for fulfilling my review request. All thoughts and opinions are my own.
Read my review of Sleuth on Safari

Bookbub - https://www.bookbub.com/profile/a-r-kennedy
A.R. Kennedy will be awarding a $25 Amazon or B/N GC to a randomly drawn winner via rafflecopter during the tour.
a Rafflecopter giveaway
Posted by Andi at 3:30 AM