The Gourmet Gangster: Mysteries and Menus by the Family by Marcia Rosen & Jory Rosen

Food and mysteries are a perfect pair! And the two come together in this series of mystery stories by Marcia Rosen and Jory Rosen. Enjoy an excerpt before you download your own copy to devour. Be sure to leave comments and questions along the way as you follow the tour. And of course, best of luck entering the giveaway! 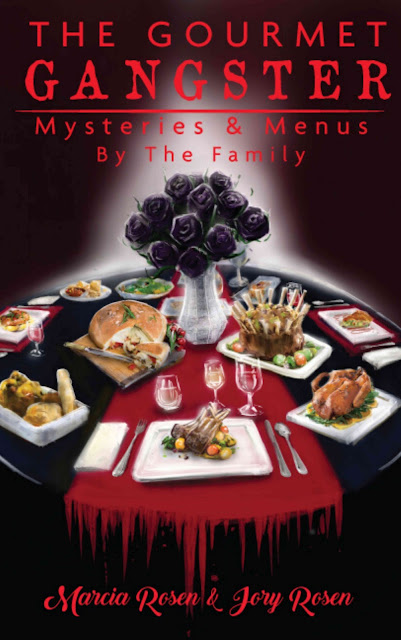 This is a collection of murder mystery stories linked by two main characters, Poppa and the Boss and at times joined by the Senior Sleuths, Dick and Dora Zimmerman and their friend, Zero the Bookie. How they get involved is often a mystery.

Poppa is head Chef for a successful restaurant, Manhattan Shadow, owned by the Boss, a powerful mobster determined to maintain control and power in his territory.

To refuse to work for him would be considered an insult. Not a good thing for Poppa’s wellbeing.

There are silent implications if one should become disloyal. There are consequences implied one doesn’t want to experience.

In the restaurants private dining room murder is often planned for all sorts of irrational reasons that seem very rational to the Boss: including power, greed, control, revenge and of course money.

The stories Poppa could tell…and does.

But who is he telling?

That’s also part of the mystery.

Of course the Senior Sleuths and Zero know.
Buy on Amazon
(affiliate link)
The book is currently 99 cents!
Read an excerpt:

“I bet murder is on the menu.”

Such comments were often overheard when discussing plans to have dinner there.

Those making jokes had no idea how true it was.

Murder appeared with different ingredients, flavored with deadly seasonings and hard-to-swallow offerings by The Mob Boss, who found a perverse pleasure in serving it.

Many wrongly assumed Poppa was part of the criminal organization.

Life handed him an unusual opportunity he could not deny. It was a choice he made for his family and himself. Growing up poor colors one’s decisions as an adult.

Poppa was nine when he began to help his mother cook. By the age of twelve he prepared more than half the meals for his parents and two younger sisters. His mother was delighted to give up cooking. While he cooked, she read stories to his sisters and fantasized about one day writing a book for children. When she told her husband, he laughed. “Who would want to read anything you write?”

Years later he would be gone. She’d remember that ugly smirk and those nasty words, and prove him wrong. She’d write several children’s books, even one about a boy who grew up to be a successful chef.

Poppa’s success would happen through a series of unexpected circumstances. At seventeen he was offered an opportunity, the first of several to come. Opportunities he didn’t dare refuse.

“Poppa, you’re a good kid.” The man across the hall from his family had known him since he was an infant.

“I need someone to drop off and pick up papers and money for my boss. I can’t do it anymore, since my stroke. I told him he could trust you. You interested?”

It was the beginning. One word, yes, changing his circumstances forever.

She hugged him and never asked, “Doing what?” She knew her neighborhood.

She was well aware of the type of people living and working in its shadows—the barely surviving underbelly of society.

They lived in a fourth-floor walk-up, in a tenement on the lower east side of New York. It was blocks from the Williamsburg Bridge, near Delancey, Clinton and Orchard Streets. Bordered by The Henry Street Settlement, China Town and Little Italy, where much of the food, clothes and household supplies were purchased off pushcarts.

Goods sat in bins and hung from ropes stretched across the worn walkways. The vendors, most often men equally worn, had come to America in hopes of a better life. It didn’t work out that way for some.

“Here’s today’s leftovers.” Poppa’s father tossed them on to the table.

His father sold fruits and vegetables from one such pushcart. Each day he left early, coming home near sundown. Sometimes he ate with them, but more often, after he brought home the leftovers, he went out to a local bar and drank his dinner.

His mother once told him, “Poppa, he’s not a mean drunk. He’s simply disappointed with his life.”

His father dropped dead of a heart attack in the middle of Orchard Street at the age of 46. His pushcart was quickly stolen.

Poppa’s job and the money he earned was now more important than ever. Once The Mob Boss saw he was reliable, kept his mouth shut and stayed out of trouble, his earnings increased.

Chicken Piccata is a classic recipe filled with an amazing lemon butter flavor. Place the Piccata over the fresh cauliflower rice (or standard rice, if you prefer) and let the sauce coat the rice for the ideal bite. Use the bread to soak up any extra sauce. The meal is the perfect complement to the crisp, clean taste of the Sauvignon Blanc.

M. Glenda Rosen is author of a total of ten books including The Gourmet Gangster: Mysteries and Menus by The Family published by Level Best Books. They are also her publisher for The Senior Sleuth Mystery Series, and will be republishing all four books in her Dying To Be Beautiful Mystery Series. She has won several book awards, was founder and owner of a successful marketing and public relations agency for many years, receiving numerous awards for her work with business and professional women. She is a member of Sisters in Crime, LA and Alb.NM, Central Coast Writers and Public Safety Writer’s Association

She currently resides in Carmel, California and can be reached at: MarciagRosen@gmail.com


Jory Rosen has been in the advertising and marketing business for over 30 years and is the owner of the J. Rosen Group, a full-service international advertising, branding and direct marketing agency.

For over two decades, Jory Rosen has set the tone for strong, innovative, and successful campaigns, while providing a flexibility and level of personal client service rarely seen in the industry has extensive experience in all areas of advertising, direct response and marketing including sales, production direct mail, email, web, TV, radio, alternative media and more. In addition, with over 150 campaigns under the belt, there is a strong track record of success.

Jory’s passions are his family, cooking and wine. Jory worked as a cooking demonstrator for many years in NYC and now takes the show on the road by doing cooking demonstrations for his kid’s schools and classrooms. He often cooks meals with his kids and loves seeing their reactions to new recipes and meals.

They live in Los Angeles, California. www.jrosengroup.com
Joryla@gmail.com
Marcia Rosen & Jory Rosen will be awarding a $50 Amazon or Barnes and Noble GC to a randomly drawn winner via rafflecopter during the tour.