The Nightjar's Promise by Barbara Casey

Welcome to the virtual book tour for The Nightjar's Promise by Barbara Casey! You'll get a sneak peek into the book before you download your own copy. And then you can also learn more about her and her journey to becoming a writer. Be sure to follow the tour for even more! Leave more questions and comments along the way. And then best of luck in the giveaway! 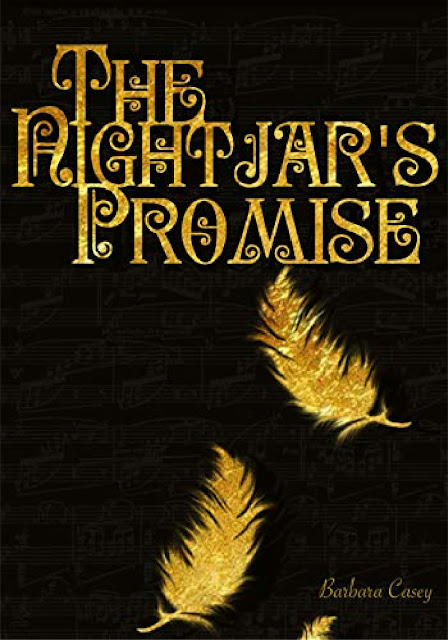 Jennifer Torres, one of the three FIGs (Females of Intellectual Genius) who is a genius in both music and art, is the last to leave the closed rehearsal for her upcoming performance over Thanksgiving break at Carnegie Hall when she hears something in the darkened Hall. Recognizing the tilt of the woman’s head and the slight limp of the man as they hurry out an exit door, she realizes it is her parents who were supposedly killed in a terrible car accident when she was 15 years old.
Devastated and feeling betrayed, she sends a text to Carolina and the other two FIGs—THURGOOD. It is the code word they all agreed to use if ever one of them got into trouble or something happened that was too difficult to handle. They would all meet back at Carolina’s bungalow at Wood Rose Orphanage and Academy for Young Women to figure it out.

As soon as they receive the text, because of their genius, Dara starts thinking of words in ancient Hebrew, German, and Yiddish, while Mackenzie’s visions of unique math formulae keep bringing up the date October 11, 1943. That is the date during World War II when the Nazis—the Kunstschutz—looted the paintings of targeted wealthy Jewish families and hid them away under Hitler’s orders. And as Carolina waits for the FIGs to return to Wood Rose, she hears warnings from Lyuba, her gypsy mother, to watch for the nightjar, the ancient name for the whip-poor-will.

As they search for “The Nightjar’s Promise” and the truth surrounding it, Carolina and the FIGs come face to face with evil that threatens to destroy not only their genius, but their very lives.
Read an excerpt:

Right on time, the guard arrived at the front gate and unlocked it. Once he drove away, Jas slipped unnoticed through the entrance into the cemetery. When he had first been given the assignment, the cemetery bothered him, especially the mausoleum. Unfamiliar sounds and smells, being surrounded by cold stones and even colder death, made his imagination work overtime so that by the end of each day when he left—just before the guard locked the gate—he would be nervous and irritable; at night, unable to sleep. Now, after all this time doing the same thing day in and day out, he was used to it. In fact, he sort of enjoyed it—thinking about the dead and all the different ways their lives might have come to an end. Lately, his imagination had taken a more brutal turn. More violent and macabre.

Ignoring the hundreds of grave sites that stretched in every direction, he quickly made his way toward the mausoleum. Having already been there many times before, he knew exactly where he wanted to go and what he needed to do.

Buy on Amazon
(affiliate link)
THIS WRITER’S JOURNEY
By
Barbara Casey
On some level I always knew I wanted to become a writer. It wasn’t so much the simple poem I wrote in third grade, or the short story that won first place when I was in fifth grade. It was more about how I felt as a person. As a child, I was quiet and shy; I was an observer – of people, places, small details, large events… everything. And I remembered everything. It were as though I was saving all of my observations and thoughts in some huge mental filing cabinet for use when I was ready to actually start writing.

After graduating from college I was hired to be the Director of Public Relations and Vice President for Development at a college in North Carolina. It was during this time that I also starting doing freelance editing – mostly book manuscripts written by the professors who were trying to get published. At some point I knew I wanted to write my own book, and I knew exactly what the story would be. I gave myself a year to write it and to find a publisher for it. Nine months later I was offered my first book contract with an option for my second book.

My early published books were written for middle grade/young adults. Then I wrote my first adult novel, and I was thrilled when it was published. I went on to write several more novels – my mental filing cabinet was still full – and they all were published and received several awards.

By now I had opened the Barbara Casey Agency, and I represented authors throughout the United States, Great Britain, Canada, and Japan. As time-consuming as this was, I still continued to write. When one of my publishers suggested that I write a nonfiction book about Kathryn Kelly, the “Gangsta Era” wife of “Machine Gun” Kelly, I did. Surprisingly, I found that I really enjoyed doing the research and finding nuggets of information I knew no one else would know until they read my book. I went on to write three more nonfiction books, two of which are now optioned for major films.

The F.I.G. Mysteries, the young/new adult series I have just completed, has been an especially emotional labor of love. The three Females of Intellectual Genius (FIGs) have been living with me now for several years. I have experienced their pain and suffering, and their joys and laughter. Coming to the end of that intimate relationship leaves me sad. But I still have that filing cabinet, and I know there is something in it that needs to be put into another book.
Originally from Carrollton, Illinois, author/agent/publisher Barbara Casey attended the University of North Carolina, N.C. State University, and N.C. Wesleyan College where she received a BA degree, summa cum laude, with a double major in English and history. In 1978 she left her position as Director of Public Relations and Vice President of Development at North Carolina Wesleyan College to write full time and develop her own manuscript evaluation and editorial service. In 1995 she established the Barbara Casey Agency and since that time has represented authors from the United States, Great Britain, Canada, and Japan. In 2014, she became a partner with Strategic Media Books, an independent nonfiction publisher of true crime, where she oversees acquisitions, day-to-day operations, and book production.

Ms. Casey is a former director of BookFest of the Palm Beaches, Florida, where she served as guest author and panelist. She has served as judge for the Pathfinder Literary Awards in Palm Beach and Martin Counties, Florida, and was the Florida Regional Advisor for the Society of Children's Book Writers and Illustrators from 1991 through 2003. In 2018 Ms. Casey received the prestigious Albert Nelson Marquis Lifetime Achievement Award and Top Professional Award for her extensive experience and notable accomplishments in the field of publishing and other areas. She makes her home on the top of a mountain in northwest Georgia with her husband and three cats who adopted her, Homer, Reese and Earl Gray, Reese’s best friend.

www.barbaracaseyagency.com
Barbara Casey will be awarding a $20 Amazon or Barnes and Noble GC to a randomly drawn winner via rafflecopter during the tour.
a Rafflecopter giveaway
Posted by Andi at 3:30 AM