To Kingdom Come: An Art History Mystery by Claudia Riess

I love mysteries as it is, but there's something about an art heist that has an added element of adventure, don't you think? Check out this excerpt from To Kingdom Come by Claudia Riess and let her know what you think! Download your own copy and then follow the tour for more. Best of luck with the giveaway! 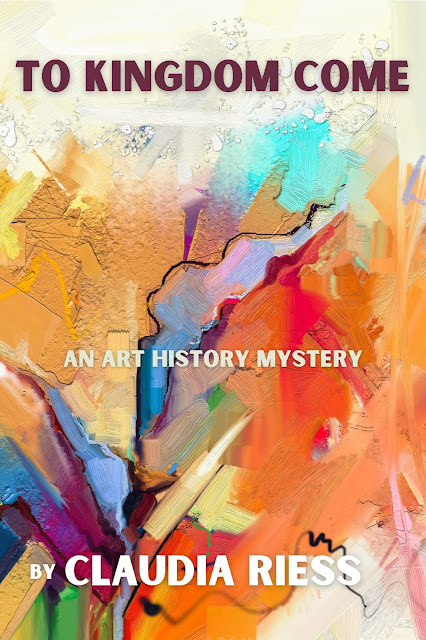 Amateur sleuths, Erika Shawn-Wheatley, art magazine editor, and Harrison Wheatley, art history professor, attend a Zoom meeting of individuals from around the globe whose common goal is to expedite the return of African art looted during the colonial era. Olivia Chatham, a math instructor at London University, has just begun speaking about her recent find, a journal penned by her great-granduncle, Andrew Barrett, active member of the Royal Army Medical Service during England’s 1897 “punitive expedition” launched against the Kingdom of Benin.

Olivia is about to disclose what she hopes the sleuthing duo will bring to light, when the proceedings are disrupted by an unusual movement in one of the squares on the grid. Frozen disbelief erupts into a frenzy of calls for help as the group, including the victim, watch in horror the enactment of a murder videotaped in real time.

It will not be the only murder or act of brutality Erika and Harrison encounter in their two-pronged effort to hunt down the source of violence and unearth a cache of African treasures alluded to in Barrett’s journal.

Much of the action takes place in London, scene of the crimes and quest for redemption.
Read an excerpt:

He wondered now why had it taken such an effort to decide which of his plans to set in motion. Walking off with an artifact or two from Franks House, the British Museum’s storage facility in East London, may have given him his political statement, but at what cost? The place was crawling with workers in lab coats and masks—conservators, project managers, photographers, interns, auditors, volunteers—the lot of them engaged in the end goal of moving 200,000 objects from the museum’s collection of Africa, Oceania, and the Americans to its nearly spanking new World Conservation and Exhibition Centre. True, it would not have been an insurmountable task, entering the quiet road where the quaint redbrick warehouse lay and unobtrusively blending into the workforce, but then what? Would he have been forced to shoot his way out of the place at the risk of being gunned down himself? How sordid and at the same time mundane to mow down an uncalculated number of individuals, only to find himself a mere casualty sprawled among them. Hell no, he was neither a loony terrorist nor a crack- head martyr. The plan in place was the more sensible course, no question about it.

It was restful, hearing below his thoughts the rhythmic phrase of train wheels clacking against the tracks in lulling repetition. His calmness surprised him a little, given what lay ahead. His scenario had been well choreographed, but only on an imagined stage with players moving about under his ironclad direction. In real life, even the most meticulous plan is apt to be disrupted by unforeseen circumstances. He knew that it was exactly 1.6 miles from Effingham Junction Station to the mansion on Ockham Lane in Cobham, Surrey, but was he certain that he would not be accosted by a madman or struck by lightning on his walk to the place?

If he allowed his thoughts to ramble on in this manner, his nerves would start acting up. He must lean into the physical moment and move with it into his destiny. He looked out the window past his reflection and focused on the indifferent stars.

About the author:
An award-winning author of seven novels, Claudia Riess graduated from Vassar and resides in Manhattan and Westhampton Beach. Her most recent novel is the fourth book in her art history mystery series. “To Kingdom Come” will be released in Spring 2022 by Level Best Books.

Last year, Riess signed a second three-book contract with Level Best Books to continue the series that began with “Stolen Light.” The plot involved murder, the Italian Renaissance, and the Cuban Revolution—as well as a love story. The book was chosen by the Vassar travel program coordinator and the Vassar Latin American professor for distribution to the participants in their 2017 “people-to-people” trips to Cuba.

The latest suspense novel set in the art world, sleuths Erika Shawn, art magazine editor, and Harrison Wheatley, art history professor. Now married, the couple is caught up in a multiple-murder case involving the repatriation of African art and artifacts seized by the British in the late nineteenth century during the colonial era. Much of the action takes place in London, scene of the crimes and quest for redemption.

An engaging speaker, Riess has recently given several author talks via Zoom for libraries* and is scheduled for future Zoom and podcast events at more venues. Subjects include “Anatomy of a Murder Mystery,” “Dangerous Liaison: Fiction and History,” and “The Joys and Perils of Creating a Mystery Series.” Her talks are of interest to both authors and readers.

*“Thank you for a fun evening. It was very interesting to hear about the process of writing.”
–Jocelyn Ozolins, Head of Reference, Shelter Island Library

Claudia Riess has worked in the editorial departments of The New Yorker magazine and Holt Rinehart and Winston. She has also edited several art history monographs. For more about Riess and her work, visit www.claudiariessbooks.com.

All four books in the art history mystery series are available through Amazon.com, BarnesandNoble.com,IndieBound.org and at independent book stores. For bulk discount purchases, contact https://levelbestbooks.wordpress.com.

Claudia Riess will be awarding a $50 Amazon/BN GC to a randomly drawn winner via rafflecopter during the tour.
a Rafflecopter giveaway
Posted by Andi at 3:30 AM
Labels: book excerpt, book promo, giveaway, Goddess Fish, mystery