Review of Summer of Georgie by Kerry Crisley

This debut novel from author Kerry Crisley is one of my first favorite reads for this summer! Enjoy an excerpt and then download your own copy to see what I mean. Also enjoy the playlist for Summer of Georgie that she has provided. Leave your questions and comments along the way as you follow the tour. Best of luck in the giveaway! 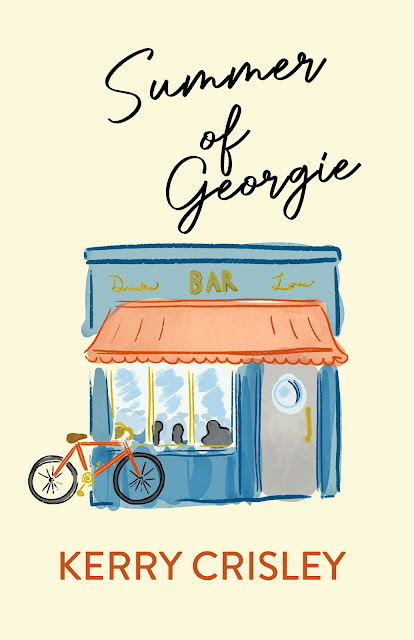 Deep into her 40s with a lackluster career, Georgie wonders how she became so...underwhelming. If she’s not battling her micromanaging boss and egotistical CEO, she’s trying to quiet her inner voice, the one whispering that she hasn’t lived up to the cool, funny and creative person she used to be.

When she's fired for finally pushing back on her CEO’s questionable business practices, Georgie – with the support of her husband and book club friends– uses her free summer to rekindle latent talents and redefine success. But just as she figures out what’s next, an unexpected hurdle threatens to turn her summer of opportunity into a zero-sum disaster.

Summer of Georgie is a fresh and likably snarky take on the “middle age do-over,” with an authentic portrayal of friendship, marriage, motherhood, and that inner critic inside us all.
Read an excerpt:

Back at my cube – my former cube – I place my assortment of photos, postcards, and desk accessories into a cardboard box. On Kyle’s desk, I leave my pad of extra-large Post-It Notes, use them wisely written on the top note.

I round the corner to the hallway leading to the side exit and, to my supreme disappoint, spot Frank ambling towards me.

“Pardon me, Frank,” I say curtly. He stops before I can pass.

“It didn’t have to be this way, Georgia,” says Frank. “But you clearly don’t want my book to succeed.”

“Are you serious, Frank?” I ask, exasperated. “I’m the one who just got you an interview with The Book Prophet, for heaven’s sake. I want your book to be a success; I just want it to be an honest success. Don’t you?”

“I am an honest success. You are not,” says Frank, unfolding his arms to jab a finger at me. He lowers his voice. “And if I may say so, you never will be.”

He turns on his heel and casually walks away. I push the door open with my shoulder and leave.

Once in my car, I sit in silence for a few moments, allowing whatever emotions I’ve tamped down in the last half hour to show themselves. There are none. Yet. Just a hyper awareness of my surroundings. The drone of traffic. The pigeon poking industriously at a crumpled bakery bag.

I pull my phone out of my purse and bring up Dan’s number. My finger hovers over the call button, then jerks away. I am not ready to tell Dan I’ve just lost my job.

The pigeon is unimpressed.

“Go poop on that blue Mini Cooper,” I add, pointing at Lena’s car in the next row. The bird continues its excavation of the paper bag.

“I’m...unemployed,” I whisper, trying out this new phrase. “I’m unemployed.”

What do we do now?

I do the only thing I can do. I call Jules.

Buy on Amazon
(affiliate link included)
**My thoughts**
I love finding books with characters who are older! (Translation: my age) We don't have enough stories about women embracing their 40s. And yeah, Georgie is lost when the book starts out, but she finds herself again in the most amazing way. I was so happy for her and rooted for her success the whole way through.
I also loved that these characters were so real. I saw so much of myself in Georgie. I recognized people I know in most of the other characters as well and flashed back to some of my less than stellar job experiences. I think a lot of readers in their 30s and above are going to relate to these characters and the life questions.
The dialogue was snappy and again so real to me. Again, these characters were just so real. I've had those conversations (gestures included) with my friends.
And even though it was all so real to me, it was also a fantastic escape. I didn't want to put the book down and was annoyed when little life events made me do so. (Work? Who wants to do that when you have a great book on hand?) I even see myself rereading this one with my Blondie CDs for accompaniment. And I would love to meet up with these characters again one day!
I received a requested review copy via Goddess Fish. All thoughts and opinions are my own.

Summer of Georgie…the playlist!
By Kerry Crisley
Music is a big part of my household. My son – heading to film school this fall – is enamored with movie scores. He’s currently obsessed with all music from the Jurassic Park franchise (and yes, he saw Jurassic World: Dominion on opening night. My husband loves 60s and 70s rock so much that he scours YouTube looking for reaction videos of people listening to “Pinball Wizard” and “Won’t Get Fooled Again” for the first time, and judging them harshly if they don’t fall to their knees in reverence to Pete Townsend. And my daughter? She's the queen of playlists. A playlist for a day at the pool. A playlist for a long car ride. A playlist for cooking.

So naturally, when I published my first novel, Erin asked me what my book’s playlist was. I blinked a bit stupidly at her for a few seconds.

Her elaborate eyeroll shamed me into combing my Spotify library. What would a playlist for Summer of Georgie include? I confess that I had a blast putting these 10 songs together, but don’t tell Erin that, deal?

In the opening chapter of Summer of Georgie, the title character is awake early, quietly sobbing into her daughter’s sweatshirt for a few minutes before slipping on her mask that says “everything’s fine!” Harmer’s beautiful guitar and lyrics perfectly capture that scene.

“Another Day” by Paul McCartney. Listen

Part of the title character’s struggle in Georgie is finding time for self care and growth while raising her kids, working, and maintaining a home. I hear this song clearly as Georgie and her husband Dan are rushing through their morning routines.

Ah, the office! Georgie works at Hudson Hotels, led by the egotistical Frank Hudson. What better song for the scenes at work? Plus, Dolly Parton is a national treasure.

Georgie is free! Fired for pushing back on Frank’s highly questionable business ethics, she embraces the opportunity to figure out what she really wants to do. I love the optimistic beat and the theme of reinvention that “Freedom 90” exudes.

“Get Better” by Frank Turner. Listen

In “Get Better,” Turner sings “I took a battering but I’ve got thicker skin and the best people I know are looking out for me.” I love this line because it represents the support network – her husband, her parents, and her book club friends – that Georgie leans on throughout the novel.

This song about a confident, all-business and no-nonsense woman is what I hear when Georgie lands on a unique business concept and goes for it. Play it loud and just try not to dance!

“Hit Me With Your Best Shot” by Pat Benatar. Listen

Frank’s ba-aack. Just when she thought she was rid of him, Georgie has to contend with her former boss trying to sabotage her dream. Bring it, Frank. She’s ready.

“Hey! Every once in a few months when all the punches land…” Georgie’s plan for Frank’s comeuppance is a resounding success. These scenes were so satisfying to write, and thus they deserve a song full of energy and victory.

“Good As Hell” by Lizzo. Listen

This is Georgie’s strutting song, when she can pause for a beat and enjoy how far she’s come in just one summer.

I loved anchoring Summer of Georgie with before and after scenes of Georgie and Dan’s home life, from stressed out to blissed out. This song has all the good vibes, celebrating what’s most important in life.


Thanks for reading! I’m always on the lookout for new songs and artists to add to my music library, so I’d love to hear from you: what songs would you add to a playlist about your life and why? 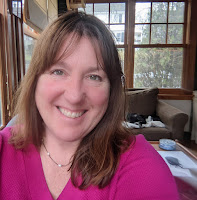 Kerry Crisley is a communications professional, with a focus on the nonprofit sector. Fiction, however, is her first love; she wrote and directed an original play performed by her second grade classmates, and has been writing ever since. She lives in Wakefield, Massachusetts with her husband, their children, and their (very spoiled) rescue dog. When not at work, Kerry can usually be found reading, hiking, or getting into a wide variety of shenanigans with her book club. Kerry is a current member of the Women's Fiction Writing Association, and also muses about pop culture and wellness on Medium. Summer of Georgie is her first novel.

Kerry Crisley will be awarding a $50 Amazon or Barnes and Noble GC to a randomly drawn winner via rafflecopter during the tour.
a Rafflecopter giveaway
Posted by Andi at 4:00 AM
Labels: book excerpt, book review, contemporary, giveaway, Goddess Fish, guest post, playlist, second chances